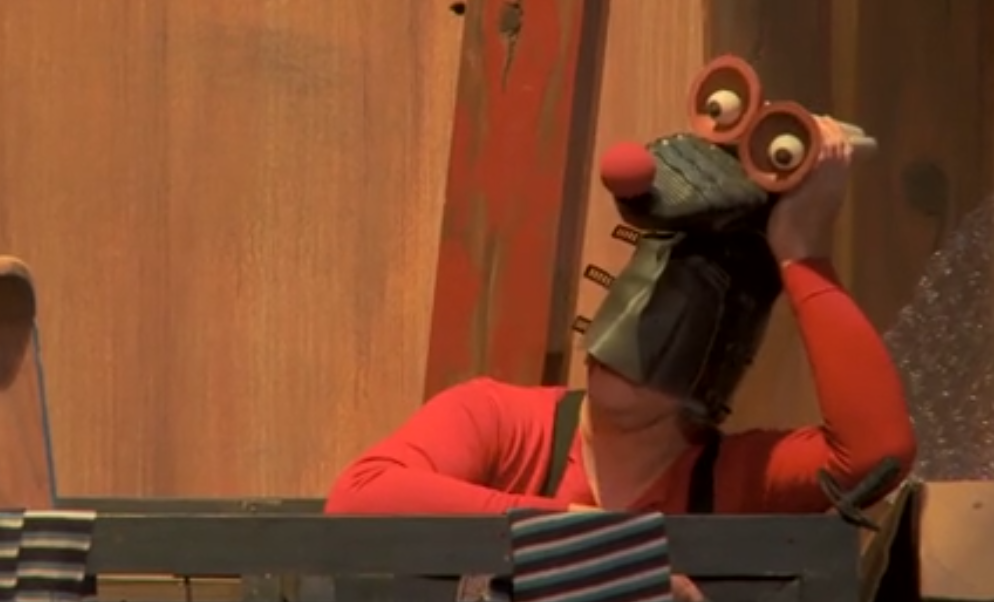 There is a line in entertainment when something passes from the comedic to the profound, from the parody and sendup to the deeply moving. On the one hand are Charlie Chaplin’s silent comedies starting The Tramp, films like Gold Rush that speak with a humor that knows no language barriers. Then, on the other, is the same filmmaker-actor’s The Great Dictator. Both are greatly amusing, but with one comes a slow realization of the undergirding – that some of the laughs add up to something terrible or tragic. To do this without words is something genius.

A similar parallel might be drawn between The Red Balloon, which played last season at the Children’s Theatre Company, and Snowflake, which plays there now. The Red Balloon was a marvelous, wordless comedy; Snowflake is that and more besides.

Without giving away too much, the story of Snowflake follows an evening in the life of an individual whose world is filled with slapstick and puppetry. The organic way that one routine knits tightly into the next is magical, and Gay LaJoye (his own sort of triple threat as writer, director, and performer) displays masterful timing and nuance. Victor Zupanc’s score subtly heightens moods and moments, and the technical ensemble – swinging set pieces, matryoshka doll-like surprises, and a sort of tennis ballet – is so finely done as to put the live vaudeville the show hearkens back to shame.

Warning: Snowflake may make your kids put down their electronic devices and play with empty cans and cardboard boxes. That’s not such a bad thing.