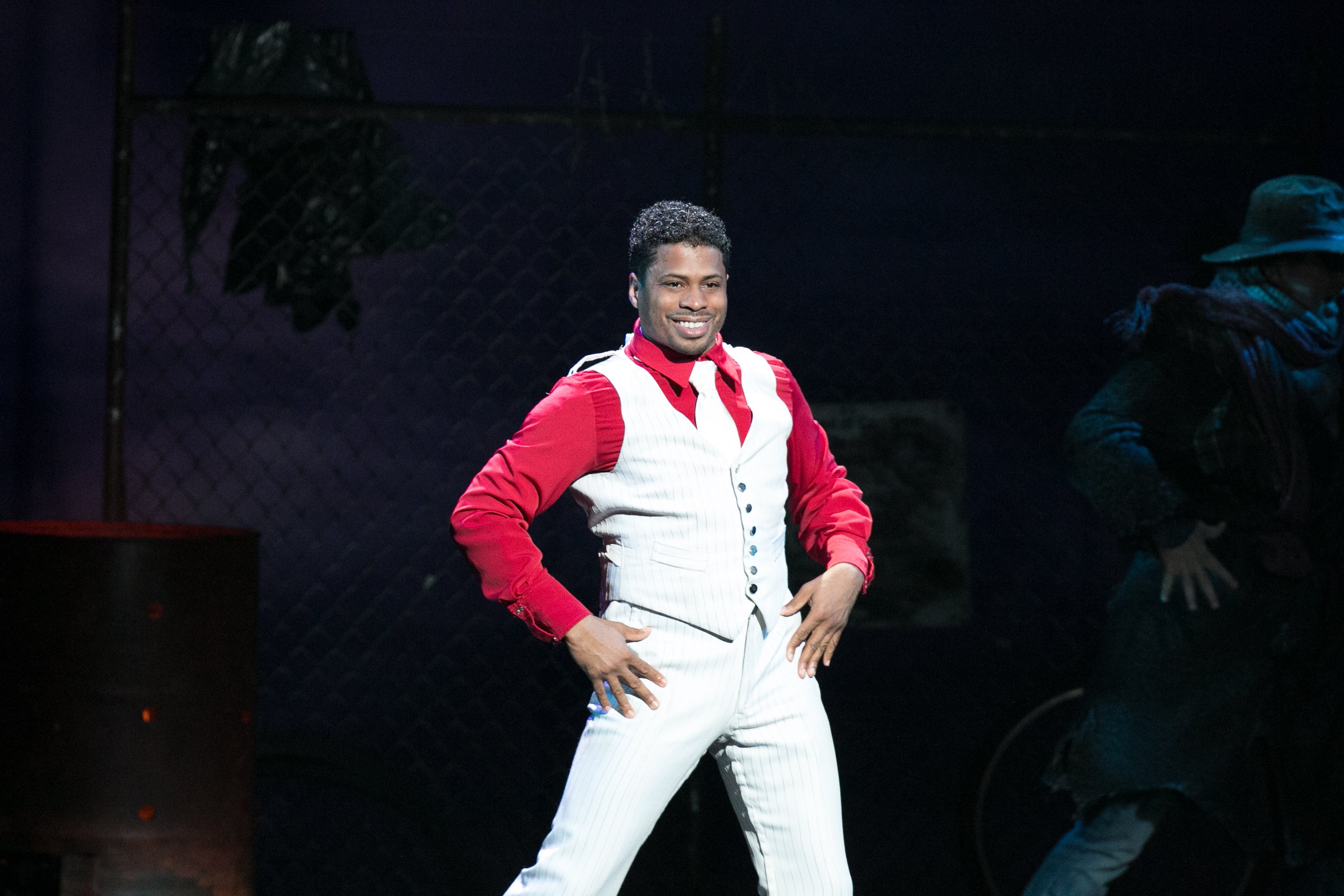 Chester Gregory (Eddie Souther) fantasizes about the man he could be in Sister Act. Photo credit: Frank Chin

Film-to-musical stage adaptations are not usually known for compelling musical values, so the stirring score of the Broadway version of Sister Act comes as a welcome surprise. The music is by Alan Menken, one of the most successful composers for the stage and screen alive, but even so: it’s a pleasant novelty. This is not your childhood’s Sister Act, and although that 1992 film had many virtues this is a good thing.

What will you get with the touring production of Sister Act? There are a lot of jokes, some hilariously hammed bad performances before things kick up a notch, and an accelerating stream of increasingly over-the-top and flashy numbers – many of which have dancing nuns in more and more elaborate costumes. In the strange contest among touring shows this year to have the most glitter and rhinestones, Mamma Mia! is now a distant memory; even the recent Bring It On: The Musical visit pales to the shininess that is eventually unleashed. Lest you think the nuns have all the spotlight, however, the musical gives good songs and even better dancing to the rest of the cast as well.

The basic story of Sister Act is the same from screen to stage: Deloris (Tarea Campbell) is a lounge singer in a witness protection program who is hidden in a rather straight-laced but musically deficient convent in 1968, leading to something of a musical revolution in the parish. Deloris clashes frequently with Mother Superior (Hollis Resnick) while being pursued by her criminal boyfriend Curtis (Melvin Abston) and protected by police officer Eddie (Chester Gregory). Campbell and Resnick have great dramatic and comedic tension as they clash, and Resnick has some beautiful contemplative songs that balance the more showy production numbers led by Campbell.

The score as a whole has a splendid and varied musical arc, one largely absent from its from-Hollywood cousins. It gives the talented cast many opportunities to shine and many of them have great moments in the spotlight. Curtis/Abston and his trio of lackeys shine in two delicious villain songs, both with very clever lyrics by Glenn Slater (best known for his lyrics for Tangled – also a collaboration with Menken). These are balanced by Eddie/Gregory’s “I could be that guy”, a marvelous song played alternately to comic and confident effect – and featuring dancing bums and some impressive tear-away costumes. Gregory is a scene-stealer.

So what about those nuns? There are many delightfully irreverent passages, and the ensemble has a lot of vocal talent that is well exhibited once the convent gets rocking. They’re backed by an impressive-sounding pit orchestra, from which the brass trio in particular adds a powerful oomph to the sound that’s just not found with synthesizers and sampled sounds. The cast & orchestra slip smoothly through the many varied sounds of the late sixties and early seventies, including a Barry White-like number. Suor Angelica this is not, but it’s a lot of fun.