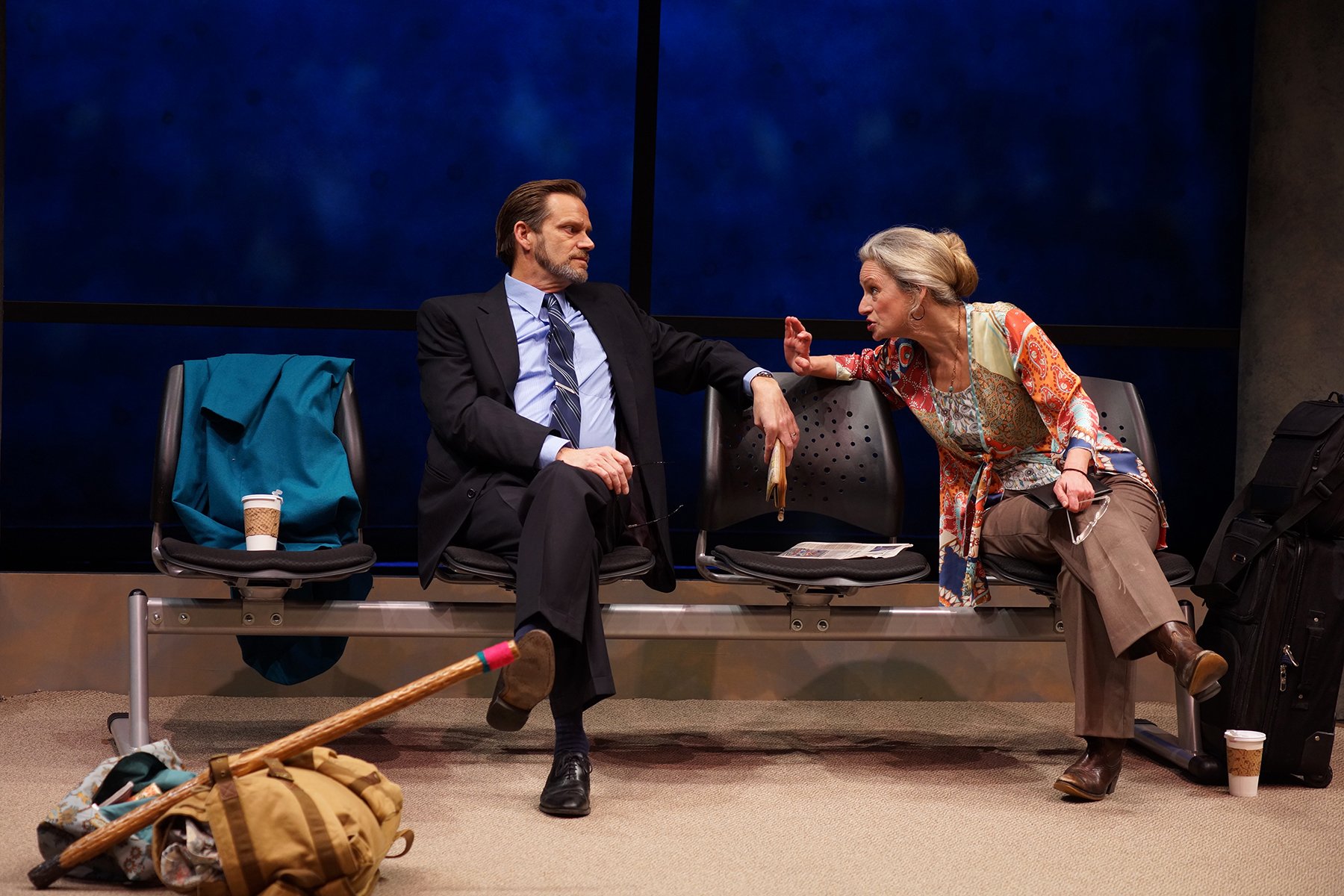 Reflections on the divergent roads taken by past lovers are explored in Steven Dietz’s play Shooting Star which opened at Park Square Theatre on March 27. Director Leah Cooper’s direction of the former lovers meeting at a snowed in airport removes the “fourth wall” to reveal the play’s humor and the characters’ pathos.

At a non-specific, large middle-America airport shut down by a blizzard, Reed and Elena meet for the first time in decades. The two were lovers for 22 months at the University of Wisconsin-Madison when they were young and in college. Reed has married, has a child and became a middle manager for a corporation. In contrast, Elena has remained a free spirit, never married, meditates and does consumer survey phone research to support herself. Reed lives in Boston and is on his way to Austin, Texas, for a business meeting. Elena lives in Austin and is coincidentally on her way to Boston.  She plays coy and pretends she does not see Reed but desperately wants him to approach her. He does so reluctantly with the anticipation of a quick get away when his plane leaves. But the momentary meeting becomes an extended overnight night visit when snow cancels both their flights. Over the course of the night, we learn they both carry lingering resentment over their “amicable” breakup, yet they both manage to find the spark and chemistry that brought them initially together.

The characters are played by two top-notch actors who fit the roles perfectly. Mark Benninghofen as Reed brings both humor and the weariness of life to the role of Reed, a man who followed the more conventional path to middle-class success but finds his rewards are limited. Sally Wingert gets to play the more flamboyant Elena who you could see easily fitting into a commune life-style, but she too finds that her hippy lifestyle has had its drawbacks.

Much of the humor in the show comes from removing the “fourth wall” when the characters talk directly to the audience. This technique disappears mid-play but is resurrected at the end. The first hour of the play is by far its best. By the last third we are learning startling things about the character’s lives which seem contrived and takes away from the genuiness of these two characters connecting during their brief time together. The play would probably work better if it was shorter and not reliant on these startling disclosures.

Kit Mayer’s scene design creates a realistic airport waiting center, except for one flaw. The seats on stage do not have armrests which must be virtually mandatory in airports to prevent people from comfortably sleeping on the chairs (at least in every airport that I have had to spend the night at).

Almost everyone has an “if only” question about someone in their past. Benninghofen’s and Wingert’s performances, along with Cooper’s direction, provide a production that inspires our own “if only” thoughts.