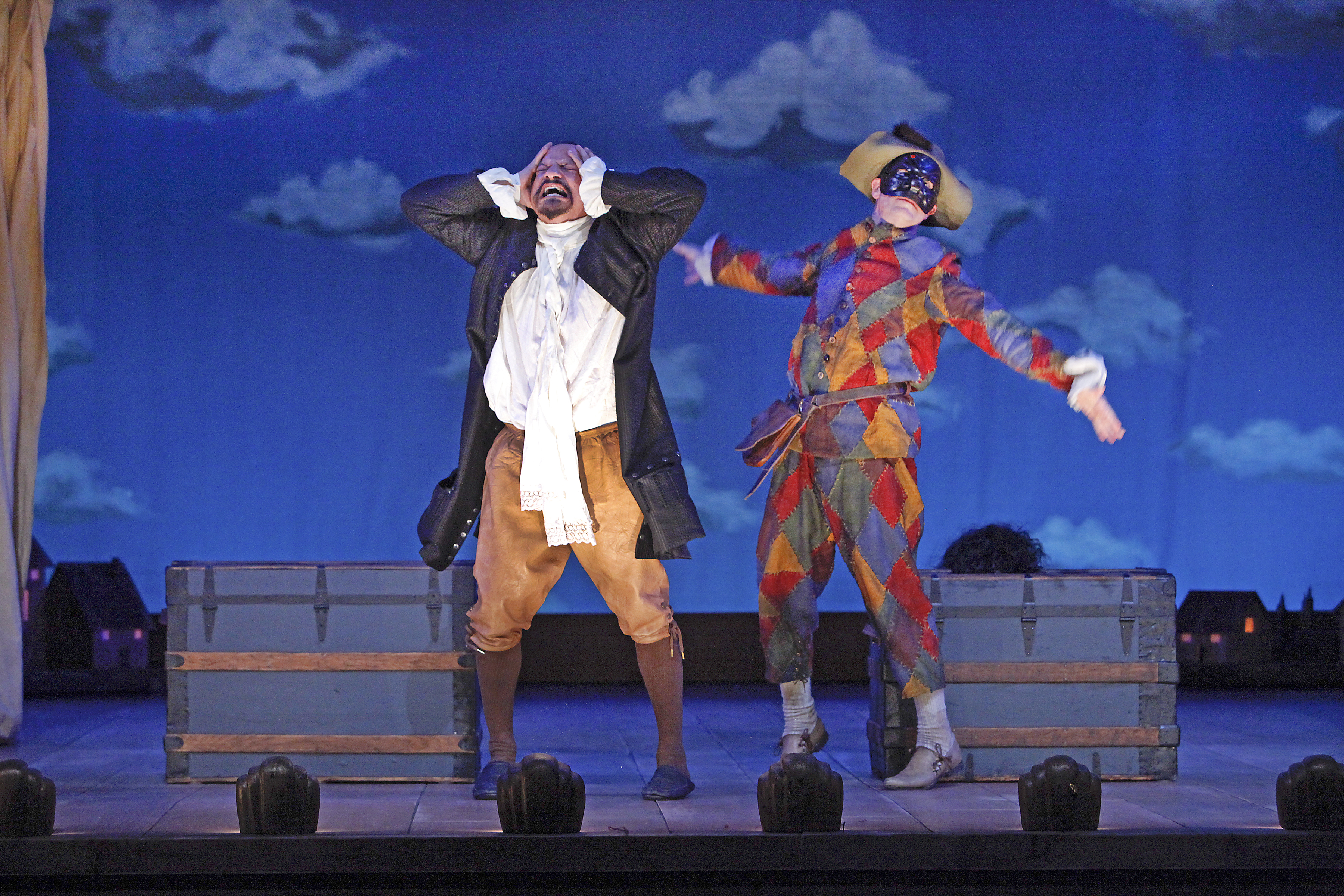 I’ll be precise in describing my experience at opening night of The Servant of Two Masters. Almost everyone around me laughed merrily for the show’s two-and-a-half-hour duration, and at its conclusion leaped to their feet to give a standing ovation. As for me, I laughed three times. Total.

Why the discrepancy? I can be precise in explaining that as well: it’s a question of how much amusement one gets out of the rapid-fire mentions of pop culture tropes during a well-polished Commedia dell’Arte performance on the McGuire Proscenium Stage. If a woman in 16th-century Italian garb standing up at the Guthrie and shouting, “Nobody puts Baby in a binder!” strikes you as highly amusing, do not delay in buying your ticket to The Servant of Two Masters, because you are really going to love it.

There’s a lot to admire about this production, developed by the Yale Repertory Theatre. Director Christopher Bayes smoothly integrates song, dance, and schtick into a well-paced production that never flags, no matter how much you might want it to. The costumes by Valérie Thérèse Bart are works of art, particularly the fluffy gown worn by Clarice. Set designer Katherine Akiko Day gets a lot of oohs and aahs out of a starry-night scrim. The performers, further, are expert—but at the Guthrie, that largely goes without saying. The question is, to what end are their talents deployed?

The script, adapted [takes a deep breath] by Constance Congdon and further adapted by Bayes and Steven Epp from Christina Sibul’s translation of a play by Carlo Goldoni, has the performers, in the Commedia dell’Arte tradition, freely riffing on the source material, taking liberties for the amusement of the audience. The gimmick in this instance is that though the performers are working in classic tradition, with classic source material, they’re aware they’re in the present day and constantly pepper the show with contemporary references.

This was a source of great amusement for the lion’s share of the December 7 audience. For me, though, the show fell into the uncanny valley of comedy: material that’s made to seem improvised even though it doesn’t feel improvised. Having seen the show only once, I can’t say which elements of the performance I saw were improvised and which weren’t, but the show contains an awful lot of ba-domp-ching punchlines that feel, no matter how up-to-the-minute the references, stale and calculated.

Here’s how this works in practice: my character mentions being short on cash. I now say “fiscal cliff,” which gets a laugh, because, hey, that’s in the news! I then mime someone falling off a cliff, which keeps the chuckle going. I then mime the person continuing to fall, which incites more laughter because, ha ha, that’s a tall cliff! Next line, next bit, repeat for 150 minutes.

At the center of all this, Epp himself is tireless as the clown Truffaldino. Jesse J. Perez, as Florindo, has great autoerotic fun with his character’s masculine flourishes, but as his lover-in-disguise Beatrice, Sarah Agnew seems lost. She delivers her lines crisply, but doesn’t seem invested in the sprit of the enterprise—to which I, were I a performer in this production, would say, “I’m with you, sister: un-im-pressed!” And then we’d both make the McKayla face, and everyone would laugh heartily.

The performers repeatedly mentioned Chanhassen, in seeming acknowledgment that this production traffics in the same kind of high-polish, low-denominator humor that goes over big with the dinner-theater crowd. If you like it at the Plymouth Playhouse, you’ll love it at the Guthrie. If you’re a snobby asshole like me, though, stay the hell away.

Read Jay Gabler’s review of the Guthrie Theater’s 2012 production of A Christmas Carol.