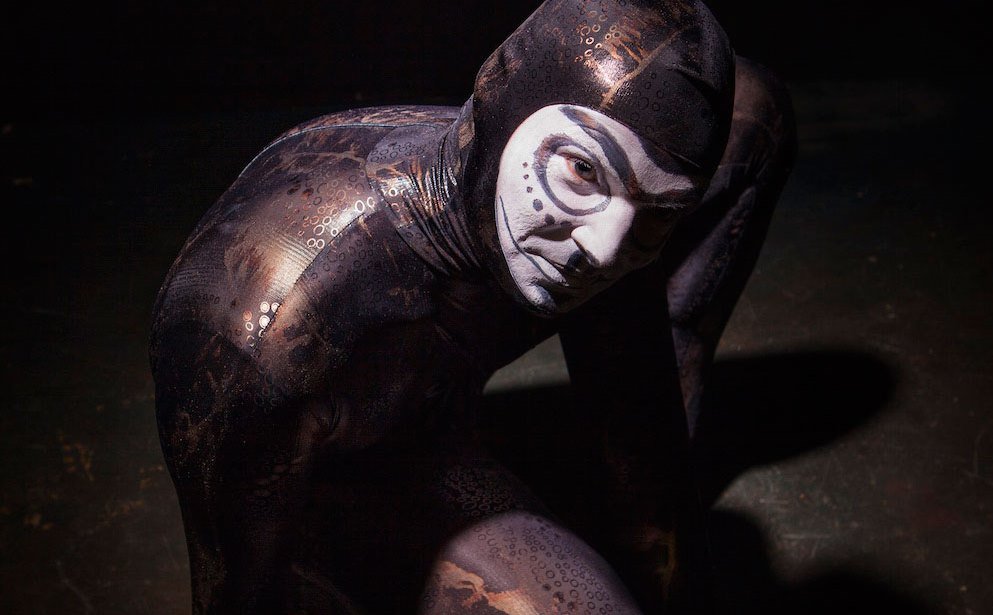 I had the pleasure of seeing the original War With The Newts back in 2007 when Sandbox Theatre first tackled the Karel Capek science fiction novel, so I knew this reimagined revival was also bound to be a lot of fun. In a way, Capek’s tale is not your standard sci fi cautionary tale. Normally, you’d use the race of newts as a stand-in for human behavior and the audience would have just enough distance from themselves to be able to see the pitfalls of the newts’ way of dealing with one another. Here though, the newts are addressing us in the audience as fellow newts, using human beings themselves as the cautionary tale, putting on masks in order to imitate human beings and just making the whole thing a lot harder to ignore as a straightforward indictment of human folly.

“No sensible man has any business going to Devil Bay.”

Sandbox Theatre as a company has also been evolving over the eight years since this story last hit the stage, and it shows in this new improved version of War With The Newts. The Sandbox ensemble has their way of working down to a science at this point. That doesn’t mean they don’t have misfires, but by and large they generally hit their mark with each new creation. War With The Newts hits its mark in a big way. Its not just good solid storytelling, it gets under your skin and screws with your head as well. Even as you’re laughing, you’re also a little uneasy.

“See how it mocks God’s creation.”

Because let’s be honest, newts rule the world in this story. Humanity is done. That’s a creepy place for any story to start. Our newt narrators are telling us a story so the fate of newt society doesn’t follow that of humanity down a path of exploitation, fear and greed to its ultimate destruction. The newts are taking their cue, oddly enough, from the pleas of the last human child Marenka (Evelyn Digirolamo). She urges the newts to keep telling the story of the rise of their race and the fall of humanity so that the newts have a chance to continue living in harmony and not to turn against one another and undo the new world they’ve built. Marenka’s newt devotees keep her going as long as they can, then they take up her mantle to go on telling the story (as they do for us tonight).

“I leave all the cooking and cleaning to my house newt.”

The bellicose Captain J. von Toch (Wade A. Vaughn) blunders his way into discovering the secret race of extra large newts, and realizes they can be used to go pearl diving. He takes this opportunity to shadowy unseen businessman Mr. Bondy (Gregory Parks) and his right hand man Pavondra (Kristina Fjellman), who see its potential and exploit it to the fullest. They keep their newt workforce a secret as long as they can, but thanks to a bumbling film crew, the newts are discovered and news of them spreads like wildfire through human society. Seeing another business opportunity, Bondy’s company helps with the importing of newts as laborers. Some make their living as carnival freaks, some end up in zoos, some take jobs as servants in peoples homes. Once newts have infiltrated every corner of society, humanity’s own worst instincts leave them wide open to a change in the balance of power in the quest for who will be in charge of the planet.

“You will work with us on the demolition of your world. Thank you.”

I don’t have any notes from that 2007 production but two things I still remember vividly are The Fat Lady (Heather Stone) and Andy Scheuchzer (Derek Lee Miller) the first newt who learns to talk, who both make return visits here. If anything, The Fat Lady is even more grotesque and unsettling that she was before. Not because of her enormous size, but because of her heartless exploitation of the newts—first as a carnival sideshow barker, then (I’m not kidding) running a slave auction.

In a ballsy move, Sandbox’s new look for the newts is almost, but not quite, blackface. This is probably a generational thing (thank God). Younger theatergoers probably aren’t going to have the same visual references in entertainment all these years after blackface has (rightfully) taken its place in the “what the hell were they thinking?!” junk heap of discarded and discredited ways of presenting race onstage.  But the new look for Sandbox’s newts—courtesy of costume designers Kathy Kohl and Mandi Johnson—is nearly jet black body suits and equally dark makeup with lighter accents around the edges. Everyone will, of course, bring their own personal baggage to the production. But it’s hard to watch the fake commercial for Lux Newt Soap and not see an African American house maid, as the two human women talk about how she smells. It’s (intentionally) repellant as an example of everyday prejudice and white privilege, and it’s not the only instance of it in the play.

“You need no name, human. There are no others to confuse you.”

As gross as the Fat Lady and her human compatriots can be, the ill-fated newt Andy is at the other end of the scale, being almost instantly lovable. Andy, in learning to speak, becomes an immediate fixation for the scientific community. He’s the beginning of the end of our race, and the beginning of the rise of his own. Of course he doesn’t know that. His wide open curiosity and eagerness to please are heartbreaking. Just like he was the first time around, Andy the newt ends up being the most human (in a good way) character in the show. If you don’t feel for Andy and his plight, you should probably get your heart checked, to see if you still have one. Just like the commentary on racism, the sentimentality of Andy’s story is played in such a way that the message is unmistakable, but you still don’t feel like you’re getting hit over the head with it. The whole of War With The Newts is like that, walking this really fine line in very dangerous territory. But if you’re not telling a story in theater that scares you just a little bit, you’re probably not pushing yourself hard enough.

“Newts have no instinct for storytelling. We quickly forget.”

The actors are so thoroughly obscured by their newt-ishness, and the ensemble such a seamless unit, that it’s hard to pick people out of a lineup even with the help of a program. For instance, I haven’t yet mentioned Megan Campbell Lagas because she’s listed merely as X. I’m sure she was just as vital a storyteller as the rest (everyone was constantly throwing themselves into the creation of this world from start to finish), but got less flashy obvious material to stick in my head. The cast is in newt mode from the moment the house opens, crawling around the stage and making noises, wandering into the theater seats and looking around, shadowing the (very good sport) ushers as they do their work getting the audience to their seats. And you don’t get to see a human face in curtain calls, either.  Newts they were at the start, newts they are when they bow.

In fact, the only potential misstep I can see here is a revelation late in the game that a key figure isn’t who we thought they were. While it’s a nice surprise, I think it undercuts the main message, and in fact might reinforce a very unintended one. Rather than humans being their own worst enemy, it implies the notion, “see? if those ‘others’ get a foothold in our society, they’ll take away everything we have.” But with a tale this wild and funny and complex, strange ideas like that might be an inevitable hazard. Director Peter Heeringa, project leads Ryan Hill (also writer and mask maker) and Tim Donahue (also music director), assistant director/stage manager Kristin Ditmarson and the Sandbox ensemble are all trying to keep a lot of balls in the air here. It’s impressive that they never seem to drop them (sometimes even when you wish they would).

“The burden of peace rests upon us all.”

War With The Newts is partly about race, partly about how humans treat animals and the environment, and partly, of course, about war and peace. In many ways, it’s an undisguised wake-up call. The fact that Sandbox Theatre is using their trademark subtlety in the service of not being subtle at all is an interesting mind bender. And maybe a sign that we all should be more worried than we currently are. Meanwhile, go see the newts in action. War With The Newts is a fun night at the theater. (Just be prepared to think you need to do something about it after it’s over.)