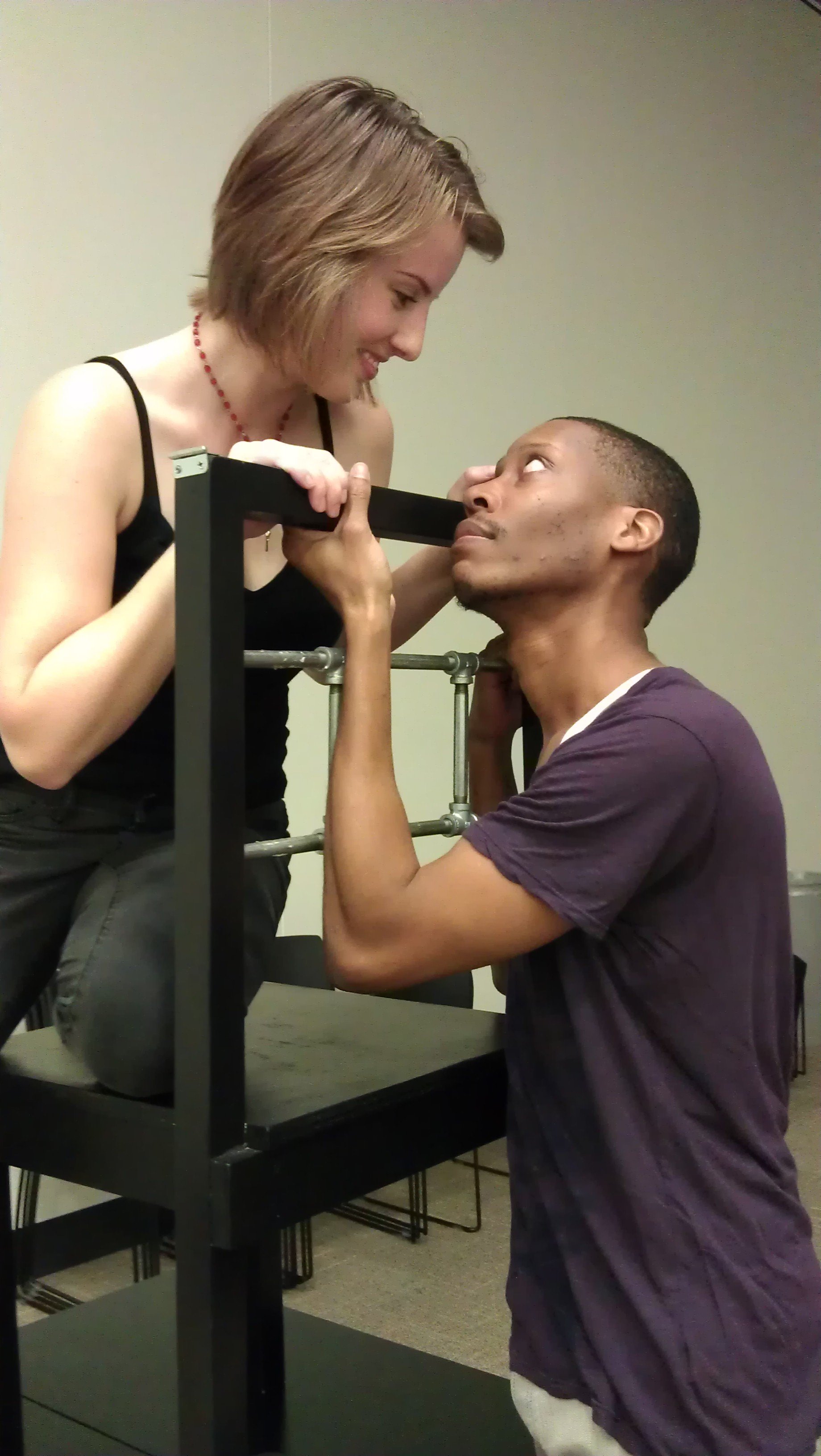 Anna Sundberg and Namir Smallwood as the title characters in Ten Thousand Things' production of Romeo and Juliet; Photo by Peter Vitale

Right after A Midsummer Night’s Dream and Hamlet, if there’s a Shakespeare play I probably don’t need to see another production of, it’s Romeo and Juliet. So why go? Michelle Hensley’s Ten Thousand Things theater company is presenting Romeo and Juliet right now, under the direction of Peter Rothstein—that’s why you go. And the cast, oh the cast: David Darrow, Bob Davis, Kurt Kwan, Namir Smallwood, Dennis Spears, Anna Sundberg, Karen-Wiese Thompson, and Regina Marie Williams—that’s why you go.

(One of these days, I hope the following won’t need to be remarked upon, but for now it’s still noteworthy: it’s a pleasure for the eye and the mind to see such a multiracial cast do this play, and yet have race not be a factor in the story at all. If anything, the production seems intent on treating the reality onstage as a complete non-issue. I find this both remarkable and lovely, and I wish more theaters did it as a matter of course. Less lily-white Shakespeare, please.)

That’s the whole cast, by the way. How do you present Romeo and Juliet with only eight people? The answer to that is really why you go.

“A pack of blessings light upon thy back.”

Because Ten Thousand Things takes theater to audiences that might not otherwise see it (prisons, shelters, and other underserved communities) they travel light and they keep things simple. That overall aesthetic challenges every artistic team to be that much more creative when they present a play. In his work at the Guthrie Theater and with his own company Theater Latte Da, director Rothstein normally has everything a director could ever ask for at his disposal. The results are often dazzling. But Latte Da, like all theater companies, started small. Rothstein knows how to do more with less, and it’s fun to see he hasn’t lost that skill in staging this powerful and economical Romeo and Juliet.  When tackling a well-worn classic like this, your greatest resources are the script and your actors, and Rothstein makes great use of both.

“Blistered by thy tongue for such a wish!”

The script, while not short (it still clocks in at two hours with an intermission), is streamlined here, and it’s skillfully done. No one who knows the script is going to feel like they’re being cheated of any of the big marquee moments you expect in Romeo and Juliet. But there’s also this enormous feeling of relief at the way the story just keeps moving along. No scene really overstays its welcome. In some productions that can’t bring themselves to part with a single line of the original, beautiful as the language is, you can often find yourself thinking, “OK, OK, I get it, point made.  Next, please!”  Not so in the Ten Thousand Things production. The characters all feel things just as deeply, but these actors make every moment land, and then build right into the next one. As fun as street fights and wacky characters and jokes about genitalia are to watch, a little goes a long way, and the audience is waiting for those title characters to meet and fall in love so let’s get on with it. This Romeo and Juliet does.

“What love can do, that dares love attempt.”

Anna Sundberg as Juliet and Namir Smallwood as Romeo are the only two members of the cast who don’t have to do double or triple duty. Trevor Bowen’s bold choices in costuming the ensemble help with their transformations from one character to another, and the actors make equally bold choices in distinguishing their alter egos. In Rothstein’s clever staging, Regina Marie Williams bookends the play at the beginning and end, also kicking off act two, appearing as the Prince, rolled in on a large black throne, clad in black, eyes hidden behind sunglasses, intoning lines in a way that kept me thinking of Maya Angelou. When she reappears as Juliet’s mother Lady Capulet, she’s in bright revealing clothes as the ultimate trophy wife, perhaps more childish than her daughter, all set for her audition as one of the Real Housewives of Verona. Similarly, David Darrow is all buttoned down in a jacket and spectacles as Juliet’s unwanted suitor Paris, the performance seeming to channel the persona of Wallace Shawn. But as Romeo’s irreverent pal Mercutio, Darrow is a street punk in a shirt with no sleeves and lots of muscle on display. Dennis Spears is the kindly and patient Friar Laurence one minute, and the next he’s thrown on a leather jacket and threatens all comers as the explosively violent Tybalt (plus, for good measure, he puts on an eye patch and a regal air when needed as the head of the Montague clan).

“Is this not better than groaning for love?”

Something else that distinguishes the production from others I’ve seen is use of music, so frequent it often seems continuous. You could argue that sometimes it might be too much, or too on the nose, but most of the time I was very grateful for its presence. Music and Sound Director Peter Vitale assisted by musician Jason Hansen helped bridge between scenes, added punctuation to certain moments, supplied sound effects and just generally reinforced the mood of whatever was happening on stage.

“My dismal scene I needs must act alone.”

At its heart, though, Romeo and Juliet is all about the love story. Smallwood and Sundberg really sell Romeo and Juliet, both as individuals, and as two people absolutely intoxicated with each other, to the point where being separated feels like the end of the world.  It makes them reckless, but thanks to these performances and Shakespeare’s poetry (some of his very best), you can understand why they go to such great, foolish lengths to be together. Spears and Wiese-Thompson as the Friar and the Nurse who aid and abet these two young lovers, also try to ground them in reality and common sense, with limited success. But you sense that these mentors are human, too, and they understand the sometimes unreasonable demands of the human heart all too well. They’re just hoping they can break the fall for these two kids.  This production makes you think the Friar and the Nurse might find a way to make it happen.

Does anyone need to see another production of Romeo and Juliet?  Probably not. But do you need to see good theater, done well, that leaves you satisfied that you’ve seen a good story well told by a team of artists that knows what they’re doing? Of course you do. And that’s why you should see Ten Thousand Things’ take on Romeo and Juliet.