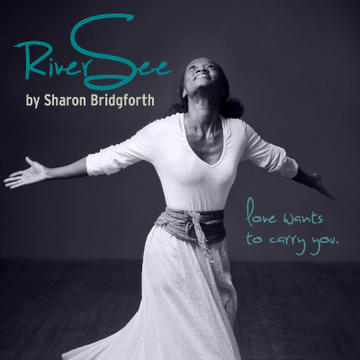 The Pillsbury House Theatre is presenting “River See” by Sharon Bridgforth through April 21 on its mainstage. I attended the April 17th performance along with a packed house, so packed that some were invited to sit on stage. That was the first observance that this was to be no ordinary theater experience.

See is a girl who grows up to be a young woman on stage with the help of the cast/ensemble and the audience. (Note to audience participation skeptics: there is a 10 minute explanation inviting various verbal and physical contributions from volunteers that may seem tedious.) Sharon Bridgforth, the writer/composer (per the program, however I’d refer to her as the playwright) acts along with the cast as a type of conductor. She uses flowing dance gestures to draw in assigned audience involvement (prayers, poetry, translations) as well as to nudge the cast in a sort of physical orchestra. She also is the primary physical guide for See gesturing scene changes (there are no formal acts). As an audience, we all help See on her journey which begins when she’s left with relatives in the South so her mother can pursue freedom in the North, through a childhood full of colorful characters, to being reunited with her mother—bittersweet as it means leaving all she loves while learning to embrace all that she’s meant to be.

River See is primarily a dance performance anchored by the mesmerizing Sonja Parks (See). At times the story suffers from the chaotic presentation (risky to involve three sets of audience members to carry their own weight). But generally, the cast creates a unified performance of body and voice that rises and falls as a great jazz piece does.

River See begins with a birthing and soon moves into See as a child telling us stories about her world populated with intense, strong characters. Often funny, but always poignant, she explains through dance and dialogue how she navigates and learns just how far she can push her caretakers’ limits. It’s seemingly a kind of homage to “it takes a village.” And, as some jazz also creates, we see and hear dissonance as well as moments of perfect harmony, especially when See grows into her own personality similar to a singer’s voice separating from the sound of an accompanying instrument. However, it seems that the crescendo—when See realizes she’s about to leave/be taken away to join her mom—came a bit too early in the performance. The intensity of that scene which involved a long, achingly sad dance by See and ensemble dancing throughout the auditorium left the audience spent.

As See makes her escorted journey North there is dreaming, remembering, and a glimpse into her surrender that being reunited with her mom will be a good thing (although we’re often reminded of how she feels about being ‘left behind’ in the first place). At one point, there was also a wedding scene which, although strongly performed by Parks and fellow cast members (Kenna-Camera Cottman, Truth Maze, Leah Nelson, Mankwe Ndosi, Aimee Bryant), lacked sufficient introduction to flow effortlessly into See’s story.

The Dramaturge of this performance is Nia Witherspoon who tells us in the program notes that “This is about movement, change, creation. Courage.” Because, as an audience member, you’re invited in to be part of the performance, that could be your truth for the evening. If you allow yourself to run alongside the banks of River See‘s journey, you’ll reach a destination of having experienced a new theater experience which may make you feel courageous enough to continue on to other new experiences. Why not take it?

A little more about The Pillsbury House Theatre: this performance is pay-what-you-want, opening the door to anyone interested in participating as an audience member. The auditorium style seating is comfortable. There are not refreshments for sale. Easily accessible by public transportation, there is also secure parking right next door. Some performances offer child-care and host discussion groups.