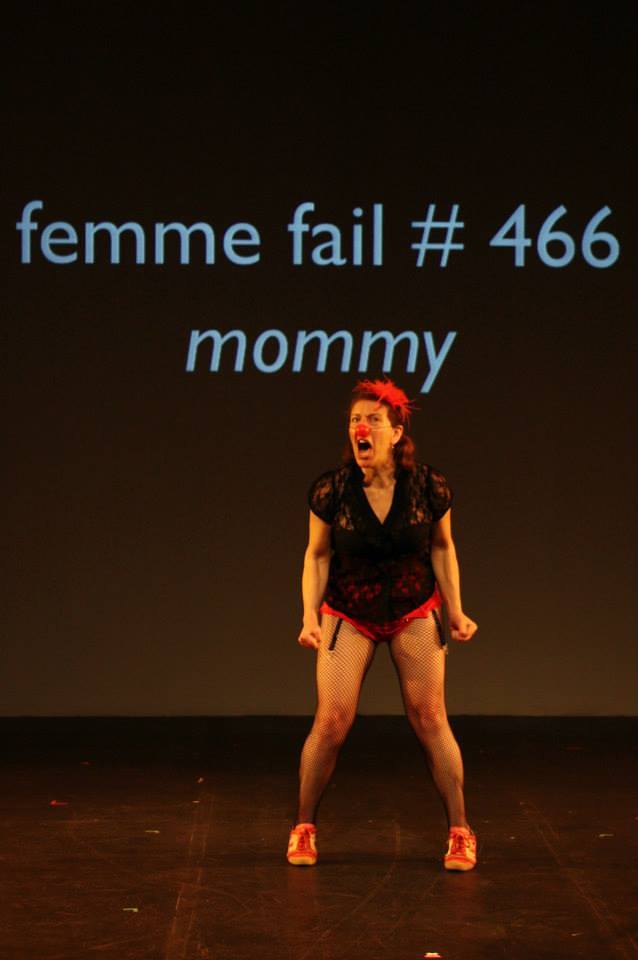 20% Theatre Company has saved the best for last in this year’s Q-Stage. The red-nose clowns of Femme Cabaret: A Clown Burlesque and the angry dancers of Gifts of Set C couldn’t be more different in style or tone but together they make for a perfect evening of theater. Of course, you should see all the Q-Stage offerings this year, but if you can only fit one into your schedule, it should be Set C. Absolutely delightful from start to finish (and that includes the part where one of the performers attacks the audience – no, I’m not kidding.)

Creator/performer Shannon Forney calls Femme Cabaret “a playful romp on queer femme identity from the awkward center of a Red Nose Clown” and I can’t come up with a better summary statement than that. Shannon’s clown alter ego is Naughty Dottie, and with the help of her red-nosed partners in crime Charming (Emma Buechs) and Swish (Jacob Miller), she guides us through a whole quirky catalog of embarrassments and near misses as she attempts to understand the femme identity’s place in a queer culture. As an audience member, I was so charmed and bemused by Dottie’s misadventures that I didn’t realize until it was over that I’d actually been thinking quite a lot about the notion of identity, gender roles, and the sneaky enemy of conformity (a trap we all fall into, even as we try to set ourselves apart). The comedy gets information through my brain filter that might otherwise resist someone flat-out lecturing to me on identity.

“If you’re all alone, are you still queer? Is queer relational?”

I was going to talk about high points but the more I think about it, Femme Cabaret is kind of all high points. The silent introductory sequence, where Dottie shows off her sexy ensemble, and then writes key words in chalk on suitcases to get the conversation going. The mismatch of coffee dates met through the anonymity of the internet. The extended misfire of poor Swish trying every way he knows how to teach Dottie how to be sexy, set hilariously to the musical stylings of Beyonce. The valiant attempts to walk in spiked heels rather than the more comfortable (and practical) clown sneakers. The hapless explorations of the Mommy side of the Femme identity. By the time Dottie does her closing chat with the audience, she’s earned our full attention and then some. Even the closing dance number and bows were a heck of a lot of fun. It’s easy to forget how enjoyable it is to be in the hands of a performer who knows what they’re doing, until you have the pleasure of watching something like Femme Cabaret. Honestly, I was wondering how clowns were going to work in the context of this kind of queer new works festival, but it turns out they’re some of the best stuff Q-Stage has going this year.

“You must know some penises somewhere.”

Completely different, but equally fantastic, was the dance piece Gifts, created and performed (or, as they say in the program, manifested) by Deja Stowers and Kenna Cottman. I was enjoying Gifts so much, I had to hide my smile behind my program. Because Gifts isn’t interested in making me smile. And I didn’t want the performers to think they weren’t getting the desired response. My challenge in situations like this, when the performers are clearly screwing with audience expectations, is that I’m looking at it from two steps back. I’m appreciating the kind of performance it is, and have to resist cheering the artists on. Audience members used to being more passive or immediately swept up in a performance are the ones getting the kind of shocks, and giving the performer the kind of feedback, that is intended.

So what’s Gifts all about? I keep describing it to people as two dancers who have absolutely no interest in dancing for your enjoyment. I’m smiling as I type this. Which is the wrong response, I’ll grant you. If the dancer/choreographers read this, they will likely despair, “Dammit, he enjoyed himself! What is wrong with him?!” Because Gifts is also about race. 20% Theatre Company is a fairly white company. Their audience base is a fairly white audience. The two performers are fierce African American women. So both on gender and racial lines, things are charged here. And that’s even before you factor into your thinking all of the protests currently going on in urban centers (like ours) all over the country.

One of the things that makes me uncomfortable about the Guthrie Theater is its (seemingly unintentional) propensity for inviting African American artists into its walls for the purpose of, for lack of a less delicate phrase, “singing and dancing for the rich white folk.” (Caroline, or Change; Ella; The Scottsboro Boys; Burial at Thebes; heck, even the currently running production of The Crucible – and that’s just off the top of my head since they moved to the new building on the river. Notable exceptions are when they’re doing a co-production with Penumbra Theatre, and even then – The Amen Corner, Ma Rainey’s Black Bottom. Please, for the love of all that’s holy, just let them act. Please.) Again, I don’t think it’s deliberate. But it keeps happening. Here, in Q-Stage, Gifts flies right in the face of all that mess.

The first half of Gifts, Deja Stowers is performing in dim light with a field of blue projected on the back wall to provide some additional illumination. The amount of time both Stowers, and later Cottman, spend aggressively “not dancing” is actually pretty great. It makes for some supremely long and uncomfortable stretches of time where the performer is almost daring the audience to give up and look away. You do so at your peril. I cannot adequately convey the feeling of being in the audience watching things quite deliberately “not happen.” Stage time expands in a way you can’t put into words. But you’ll know it when you feel it.

The music, like the lighting, in Stowers’ section of Gifts, is more gentle. But rather than dance right away, she spends time with this lighting and musical accompaniment setting things on stage that we can only see (like her) in silhouette and shadow. It’s not until the second dance by Cottman, with brighter, harsher light and a red background, that we become aware of what things really are. There are many times when it feels like Stowers might be just standing there, staring at us. Because of the light, you’re not quite sure. Then, hey, wait, she left but didn’t come back. I guess it’s over, we should applaud, right? Damn, too late, the next dance has begun. (See? Screwing with us, from start to finish.)

There’s no such ambiguity in Cottman’s part of Gifts. You can see her eyes. She will walk right down to the front row of the audience and look each audience member right in the eye, unimpressed. She will stand, with her arms crossed, waiting us out. She will sit with her back to us, doing hand movements that we can’t entirely see. She picks up numerous objects throughout, trying to be nonchalant about it, retreating to a potted plant and leaving them there. (Almost daring us to say it out loud – come on, it’s racist, but you’re thinking it. Am I stealing stuff?) A box of Popeye’s friend chicken skitters out onto the stage, and Cottman kicks it violently back offstage where it came from. The blanket laid out by Stowers’ earlier turns out to have a raised fist for Black Power emblazoned on it. The musical instruments laid out before now in fuller light have an African tribal look to them. Your’e reminded of the portraits projected on the back wall from the start – Malcolm X, Harriet Tubmman, Martin Luther King, and – it’s killing me – I think the last one was Audre Lorde but I can’t be sure.

Normally this would be a spoiler but truly, you have to experience it for yourself. Cottman has been taking her time just walking around at a leisurely pace for the entire performance. Then suddenly, she just makes a run at the front row of chairs. She gets right in someone’s face in the audience, then crashes into and over still more chairs, climbing up a couple of rows to get in the face of yet another audience member. Then she bolts for the exit. Lights up. All done. Don’t think you’re going to get a chance to engage with them after the show either. The two dancers were standing, close together in the parking lot, in an intense face to face conversation. There is no invitation for you to approach. They are still controlling your response to what you’ve just seen. It’s friggin’ brilliant. I haven’t had this much fun being screwed with in a theater in – hmmm, let me think, maybe ever? Truly, it was all I could do not to cheer them on. Which means I’m probably the wrong guy to have in their audience. But damn, that was fun. You have got to see these two things for yourself, though.