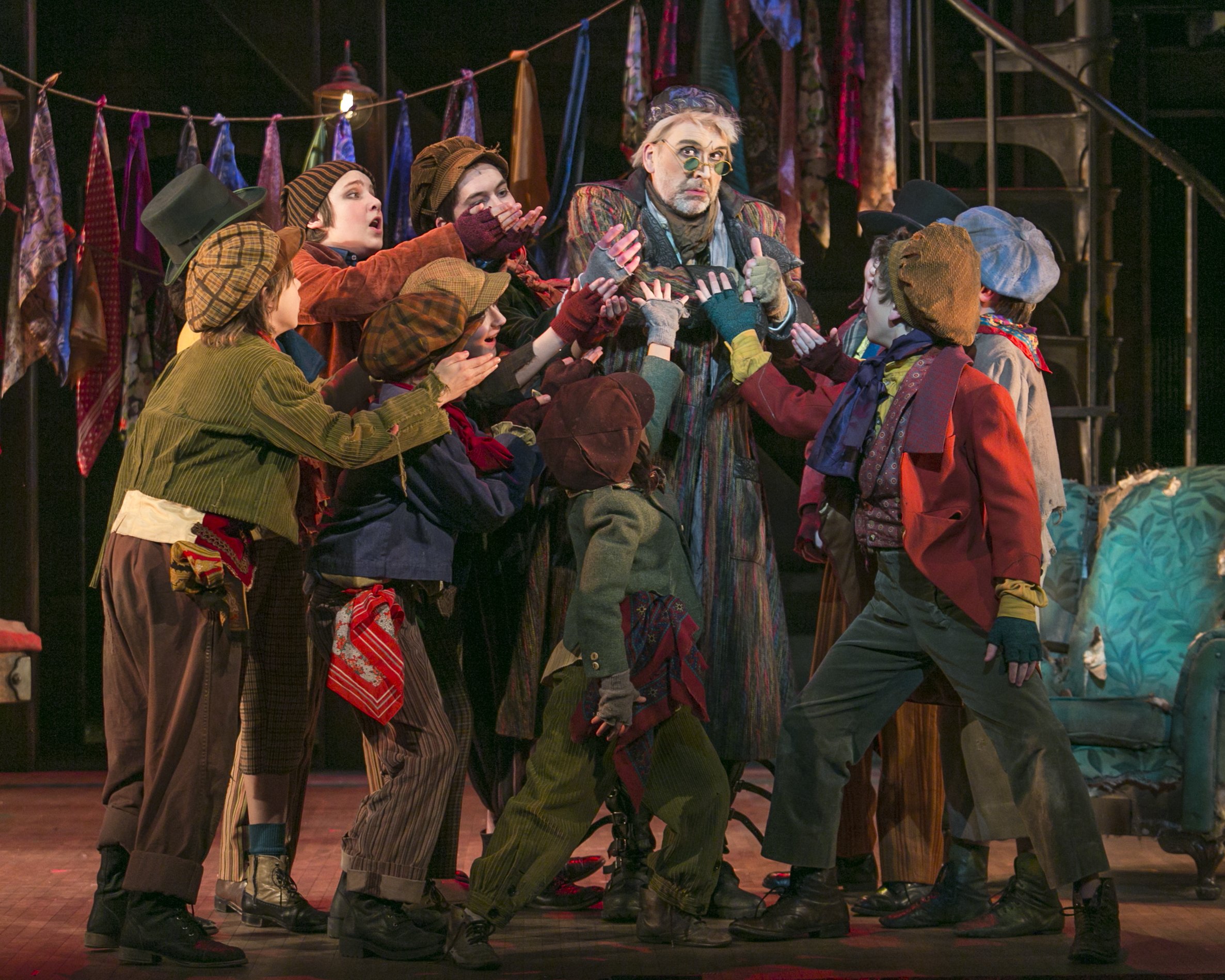 Bradley Greenwald as Fagin (center) and the cast of Oliver. Photo by Heidi Bohnenkamp.

The fast and loose connection to realism is both this production’s strength and weakness. The clouds of fog, pipes and machinery, and dramatic lighting by Rick Polenek and Paul Hackemueller create a delightfully heightened world; fans of the Guy Ritchie Sherlock Holmes films will be happily at home. The colorful and varied costumes by Christine Richardson and Alice Fredrickson are standout elements, lending themselves to an audience game of guessing which characters out of the ensemble will emerge as which principals, and yet still seeming to perfectly suit their characters upon discovery. A whole sequence of magic tricks worked into a few routines injects an additional sense of wonder. For audiences who saw last year’s Cabaret, the set is especially interesting because of how different it is from the Kit Kat Club, while still its sharing the same structural form.

The sense of timing is less successful. The first several scenes have actors telegraphing actions and reactions well before they should –something that might have come across as camp or meta commentary if it had been stronger, but instead comes across as inconsistent. This largely disappears, fortunately, by the time Oliver Twist is swept up into a life of crime and the story gathers momentum. (Score one for juvenile delinquency.) A more lingering issue is that the showrunners have all but excised the small but important pauses that let an action resound, a song sink in, and in essence let a production breathe. Several powerful dramatic and musical moments were undercut somewhat by this clockpushing.

The titular Oliver is played by Nate Turcotte in his Hennepin Ave and Latté Da debut, a portrayal that has more of a hard edge and bite than you might expect. Turcotte meshes well with his counterpart Alec Fisher, playing The Artful Dodger; their duet “Consider Yourself” marks the point where the show shows its legs. Bradley Greenwald is showstealing as Fagin, a portrayal that mixes something of a mad hatter with a demented magician; it would have been nice to have more singing and less Sprechstimme from him and several other principals. (Choreographer Michael Matthew Ferrell’s one-two punch of “Consider Yourself” and “Pick a Pocket or Two” is only upstaged by his delicious work for “Be Back Soon.”) Lauren Davis’s defiant portrayal of Nancy earned strong applause, especially after “Because He Needs Me.” A brief but vocally memorable performance by Angela Steele (a winner of the Minnesota State Fair Teen Talent Competition and Hennepin Theatre Trust Triple Threat Spotlight Award) rounds out the most noteworthy performances.

In interviews, director Peter Rothstein described this take on a musical theater classic as a re-envisioning of the source. Although it doesn’t shy from its darkest elements, the result is not a dark tale–much of the horror is exaggerated to comic effect, with great results. The new arrangement of the score for piano, violin, accordion, guitar, bass, and drums has a fresh but grounded sound to it, which helps to draw out the more timeless emotional weight of the score by freeing it from the more typical musical theater sound of the original orchestration. Beefing up Oliver and Nancy (in portrayal and staging, if not written lines) also helps the enduring relevance of the story shine through historical associations.