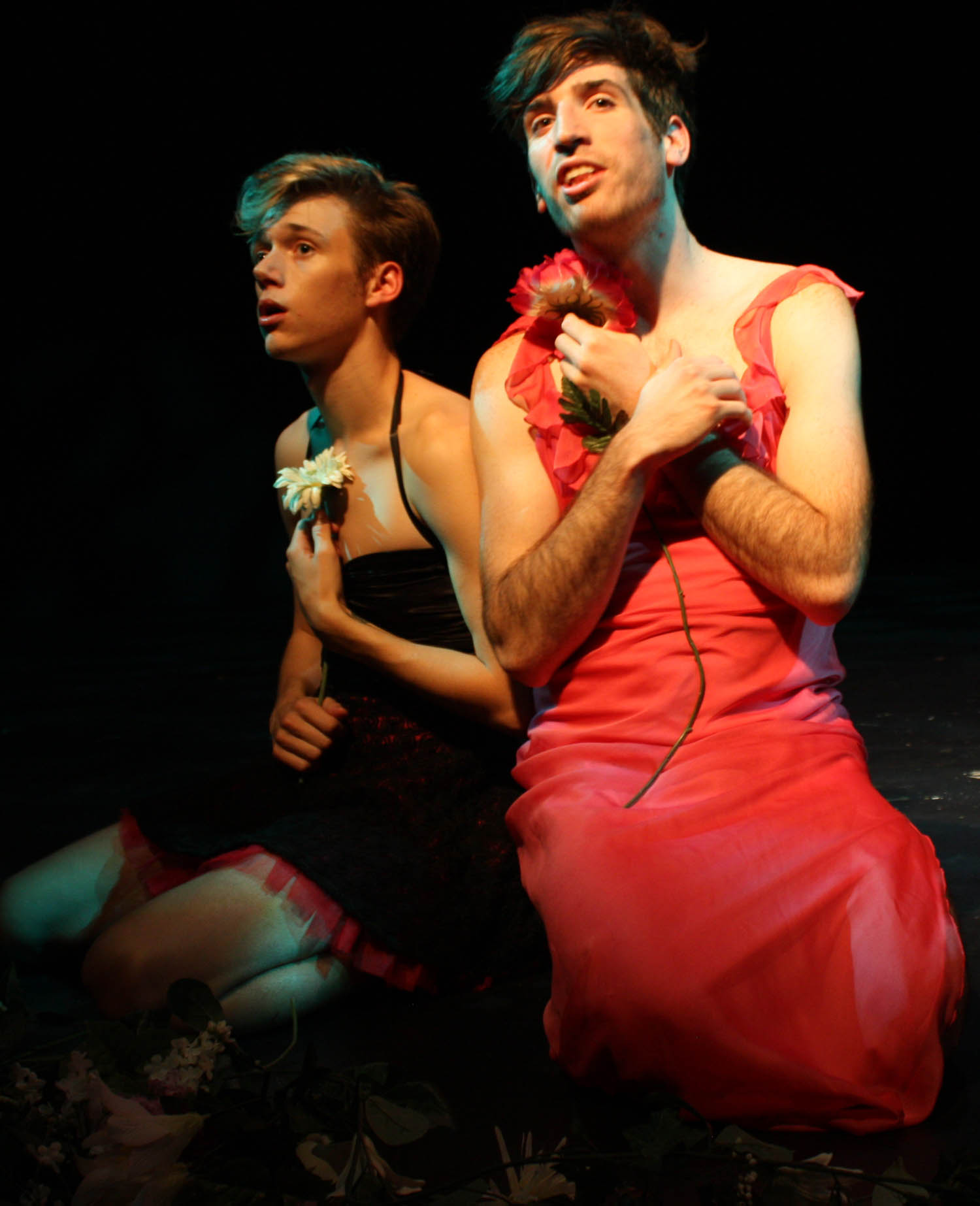 Chase Burns and Ryan Patrick of Homo Hotdish in I Do! I Do!, part of Set C of 20% Theatre Company's Q-Stage new works series; Photographer - Blythe M. Davis

Set C of 20% Theatre Company‘s Q-STAGE new works series offers up some brand new voices to add to the stew of queer artists already out there creating.

Writer/performer Anna Sutheim weaves together the story of her first love, opera, and her own sexual/romantic awakening as a young lesbian. She starts Singing Out with a hilarious rant deconstructing everything that’s wrong about the institution of opera, looking at it with an outsider’s eye. Then she brings it back to why people, her included, can’t seem to let it go—the beauty of the music at the heart of the art form. She then follows the path music cut through her life from childhood to the present. Along the way, she discovers other girls, and women.

“Opera.  That is some gay ass bullshit, dude.”

Sutheim is a beguiling performer. She is so open in sharing her passion for the things she cares about that it’s hard not to find yourself rooting for her. She doesn’t have any acting partners on stage except a couple of headless female mannequin torsos. Yet she treats her interactions with the mannequins with such genuine emotion that they become the stand-in for whoever she needs in a given moment. And she does this often without saying a word.

“It kind of messed me up, the way first loves tend to do.”

Sutheim’s personal story is interspersed with selections of operatic arias. As the music plays and the opera diva sings, Sutheim pantomimes the emotion of the character in the song. She’s not lip-syncing, her mouth never pretends to be the one singing in these segments. She’s channeling the story of the song, the desire and needs of the character. Each character is one she can relate to, or wishes to be like, because it parallels a feeling from her own real life. This may sound cheesy, but Sutheim wisely plays it very subtly. There’s no wild gesticulation, no breast beating. Much of the time she’s either coy or comical. She also incorporates side flirtations with the front row of the audience, which is ballsy but always pays off in additional laughter.

“Der Rosenkavalier, the most lesbian of all possible operas.  Strauss was such a dyke.”

In the story of her life, Sutheim’s perfectionism undoes the happiness that music brings her. Since her voice can’t be great, she takes no pleasure in the fact that it’s good. The more that people believe in her talent, the less she believes she will ever reach the level she wants. So after years of giving her joy, Sutheim breaks it off with her first love. Only at the end does she regain her voice, and this in the final moments of the piece. Even then, she can’t look at her audience. She needs to sing blindfolded. It’s an arresting image, and a hopeful way to end the piece.

“Teen angst started really early for me.  Around nine.  Months.”

Sutheim is also finding her voice as a writer and performer, and a charming voice it is. Now that she’s given us the backstory with Singing Out, I look forward to what stories she chooses to tell next.

“We can take comfort in knowing we’re an original faux pas.”

I Do! I Do! is one of those comedies that is so conversational and easygoing, zipping from one topic to the next, that it almost doesn’t feel like it’s been written at all – that these two guys are just naturally that quick and funny. Burns has crafted a sly little gem of a script where the laughs are so plentiful they often overlap. You’re not done laughing at one joke before the next one hits you right between the eyes. That’s also, of course, due not just to the script but also the direction by Jared Zeigler and the performances of Burns and Patrick.

“Who knows how the gays know each other.”

The premise of I Do! I Do! is that the characters played by Burns and Patrick have been tapped to be groomsmen/bridesmaids for the first of the marriages among their circle of gay friends. We meet them at the reception after the ceremony, which naturally prompts all sorts of meditations on the state of their own social lives, past and present, and the possibility of their own personal Mr. Right in the future. And do they even want or need that? A special appearance by The Deity of Love (Jessie Scarborough-Ghent) furthers the soul searching and forces a little truth-telling as well.

One could argue that Burns is hitting a lot of easy targets with the humor in I Do! I Do!, but the targets are so big and ripe, it’s kind of hard not to hit them even if you’re not trying. Plus, some of the biggest laughs come at their own expense, so the humor of these characters never seems mean-spirited.  It also isn’t clueless comedy. These are smart people making dumb decisions when guided by their hearts or their crotches, and they know that. They’re young. They’re learning. The nice thing is that at least they recognize that friendship is a perfectly valid form of love, and often the only reliable one. The show is a valentine to best friends as much as it is an ode to marriage.

I’d gladly spend time watching these guys clown around again—even if they’re not in dresses wearing roller skates. After seeing I Do! I Do!, I’m really curious to see at what other subjects Burns has aimed his wit. He seems like a comedy writer I’d like to keep my eye on (because honestly, who doesn’t need a laugh these days?)

Subject Matter
– Set A, first half family friendly (queer, but not overtly lesbian); second half, bawdy humor and nudity (lesbian, highly sexual, and highly funny)
– Set B, first half, one man show about a gay male figure from old Hollywood; second half, spoken word, music and movement piece from the trans* perspective, and the eyes of someone struggling through the medical system after a life-changing accident
– Set C, first half, one woman show about young lesbian obsessed with opera; second half, satire of same-sex weddings, gay male relationships and friendships