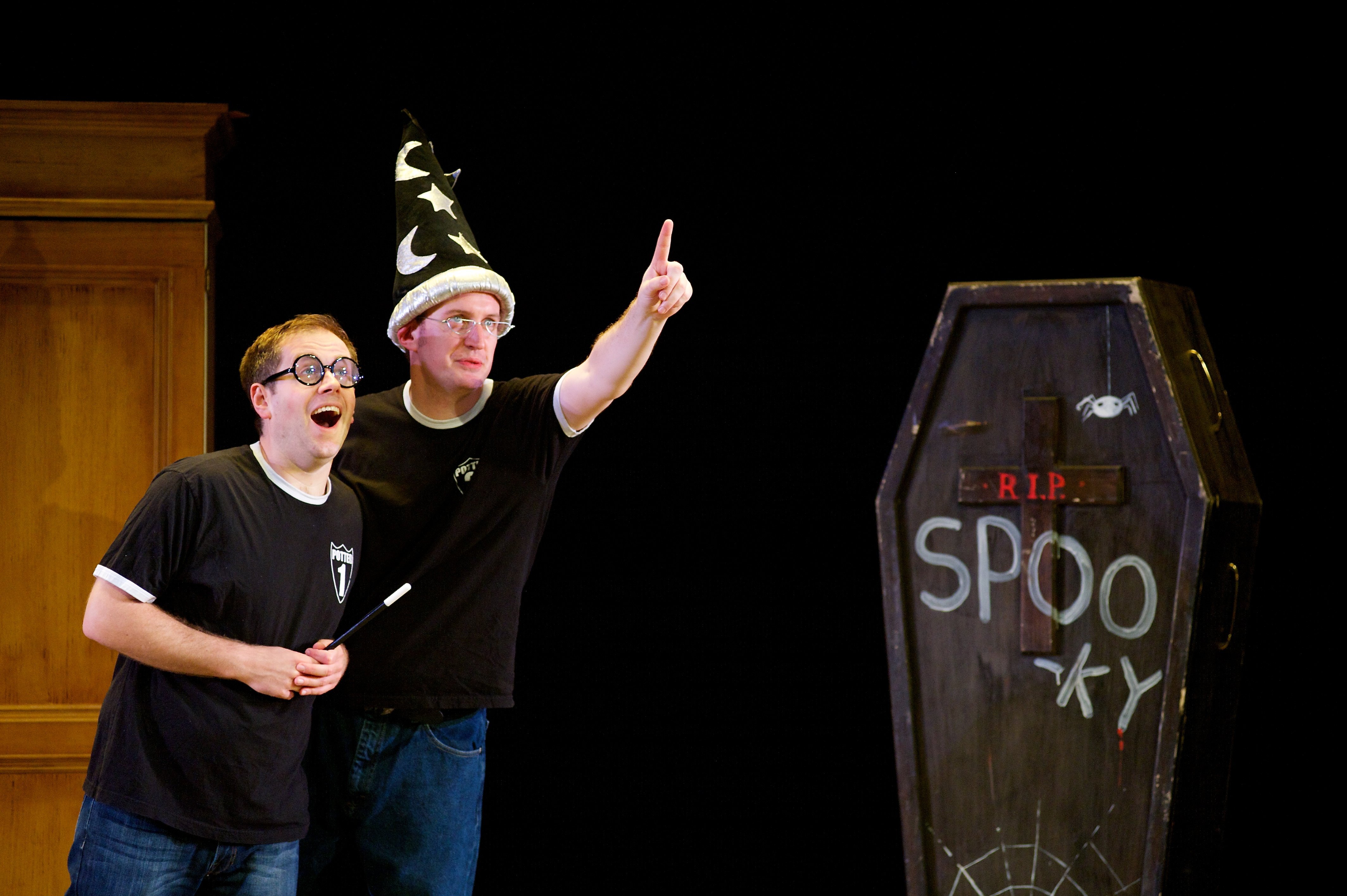 Gary Trainor as Harry, and Daniel Clarkson as Dumbledore (among many others) in Potted Potter: The Unauthorized Harry Experience

Is it possible to have too many Harry Potter parody shows floating around? Not when they’re as good as this. This would be my second (thank you, Tom Reed), but the difference here is that these guys are actually British, so, you know, no need to fake the accent. (Though you may find yourself speaking with a British accent yourself as you walk back to your car. It’s hard to shake.)

“There’s been a murder.”
“And I think we can all agree the victim is theater.”

Potted Potter, The Unauthorized Harry Experience sprung from a request back in 2005 to do a five minute recap of the first five Harry Potter books as street theater to amuse everyone waiting in line for the midnight release of book number six. As the Potter series continued to grow, on the page and on screen, so did the stage show. After a number of successful runs over in the United Kingdom, the production made its way across the Atlantic to start touring North America last year. This weekend’s stop—the O’Shaughnessy Auditorium on the St. Paul campus of St. Catherine University.

The basic story of the boy wizard Harry coming of age and battling evil, most especially his arch nemesis Voldemort, is a wildly popular, easily accessible spin on the classic idea of the hero’s journey. Because so many people have at least a basic working knowledge of the stories in the books and the movies at this point, it allows parodists like Daniel Clarkson and Jefferson Turner, who created and wrote the show, to shorthand a lot of things and streamline the plots down to their essence. Hence they’re able to power through all seven books in a little over an hour, even with the unpredictability of a lot of improv riffing off the responses they get from the audience—and even a little bit of audience participation.

“He’s one of the most powerful wizards in the world—and he chose, of his own free will, to go into teaching?”

Like the source material, Potted Potter is mostly good clean fun, so it’s incredibly family friendly. Adults and kids can each enjoy  it on a different level. One of the creators Daniel Clarkson, is doing the North America tour, alongside actor Gary Trainor. They’re both such gifted quick-witted comics, and play so well off one another, and the crowd, that it’s easy to see how the show can remain fresh and unpredictable. Gary plays the authority on the Potter books, and thus takes on the role of Harry. Daniel pretends ignorance of the books—including mixing them up with tales of Narnia and Middle Earth—and ends up playing nearly every other character in the series. This requires a multitude of hats and numerous wigs, not to mention flailing attempts at different accents and vocal inflections.

“You are without a doubt the two most terrifying children I’ve ever seen. I see how you won the War of Independence now. ‘The British are coming!’ ‘Just send out the children.’”

No prop is treated gently. No opportunity to catch your acting partner off guard is wasted. Clarkson and Trainor also genuinely seem to enjoy trying to figure out how the heck American audiences work. Their opening night taste of Minnesota theatergoers, and our particular strain of Potter fans, continued to surprise and delight them. They’re especially good with kids. They mock the smaller audience members with the same affection they do the Potter books. They are never mean, but they are frequently mischievous, and encourage it in others. That means they need to be able to roll with the results, but they think on their feet at lightning speed.

“She had 99 problems but the snitch ain’t one.”

On the rare occasion that a joke doesn’t go over well, they’re all set to mock themselves just as openly as they mock everything else in the show. Voldemort pulls a stuffed animal rabbit out of a hat, then rips it in half to prove how evil he is. Cleaning up the stage after that magic showdown, picking up the bunny head, Clarkson sings a snippet of the song “Bright Eyes” while holding the bunny head aloft. No raucous laughter, so they had to admit that some of the humor doesn’t translate easily to America. (British pop star Stephen Gately did a cover of the song that was used as a theme song for a film version of Watership Down over ten years ago, so in retrospect, very clever—just went over our heads in the moment.)

“We should have listened to that girl who’s been shouting in the front row the whole time.”

The comedy confusion runs both ways, however. The Americanized version of the first book title is Harry Potter and the Sorcerer’s Stone (originally the Philosopher’s Stone). So when the actor sees the book cover in passing late in the action, it’s just unfamiliar enough that it throws him for a split second. Then it’s immediately joke fodder. “You Americans and your different book covers. ‘What’s a philosopher? We’ll say sorcerer.’”

“I feel so guilty, I must confess through the medium of song.”

There’s stage fog and puppets and silly string but the humor somehow never devolves into something stupid itself. Even a fake quidditch match with an inflatable globe getting batted around in the front of the crowd of spectators never completely loses the thread of the story. They keep the randomness of the storytelling contained in space and time, but let them take what shape they will within those boundaries.

There are other Potted works in this series and I can see why. When the performers are this good with a live audience, it almost doesn’t matter what they’re doing. It’s fun just to watch them play, and occasionally get to play along.