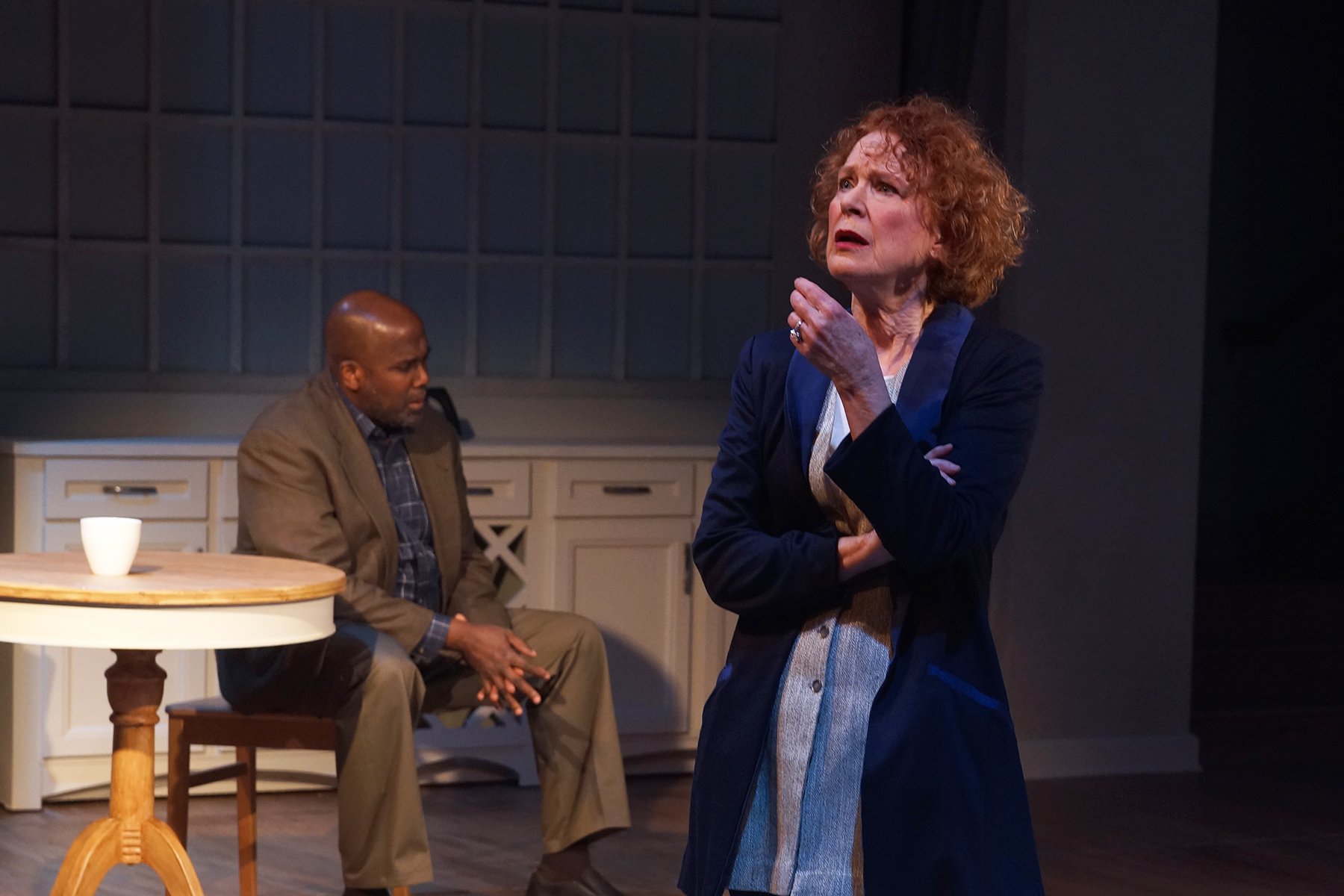 The Other Place, one of the most powerful plays I have seen in the last year, opened at Park Square Theatre on April 3. Shari White’s play concerns a medical researcher working on a drug to combat dementia who, herself, is suffering from early on-set Alzheimer’s. Aditi Kapil masterfully directs this intense show which highlights how fragile the mind can be.

Given the subject matter, one at first cannot help comparing this play to the recent movie Still Alice. But any comparisons soon go by the wayside. In Still Alice, the audience sees the character’s illness from the perspective of people who still have their minds. In contrast, the audience in The Other Place are pulled into the confused, distorted and fragmented world of someone who is having her brain rapidly destroyed. At times the play has shades of a Twilight Zone episode where one is not sure what reality is and what is fantasy.

Linda Kelsey superbly plays both the narrator and lead character, Dr. Juliana Smithton. It is a challenging role with Kelsey commanding the stage during the entire 80 minute play. Her character, Smithton developed a new drug for combating dementia and she now spends her time peddling this product to doctors at medical conferences. As the story unfolds, Smithton starts out in control, authoritatively describing the new drug she has developed. Her attention becomes focused on a young woman in a yellow bikini who is sitting in with the doctors at a resort location in the Virgin Islands. Suddenly, our attention is diverted to her phone call with her estranged adult daughter, then back again to the presentation with the girl in the yellow bikini. After becoming aware of the non-linear nature of the character’s consciousness, the audience finds itself viewing a scene where Smithton is convinced she has a brain tumor. Her husband Ian, who happens to be a noted oncologist, doubts it and wants her to see another doctor. James A. Williams convincingly plays Ian as a man who is alternating between caring husband and an exasperated, grieving spouse.

The world that Smithton initially describes becomes suspect. Smithton believes her husband is cheating on her and that he has filed for divorce, but has he? She believes her estranged daughter is calling her daily, but is this contact really happening? After a while the audience wonders if she ever had a daughter and, if she did, did she lose her the way that is dramatically portrayed in the play? Soon the only thing the audience can be certain of is that Smithton’s mind is disintegrating and we are seeing the world through the fragments of what is left.

Matt Wall and Joy Dolo ably play various supporting roles in the production. Dolo is best when she and Kelsey play the one truly humorous and touching scene near the end of the play. To Smithton, a beach house she once owned is her “other place.” Dole’s character, in the midst of her own personal crises, enters the beach home she now owns only to find Smithton, a total stranger, in a state of confusion and starvation. The two characters bond with each other and Smithton believes Dolo is her long estranged daughter for a short time. During this scene both the audience and, eventually, Smithton comes to terms with how far gone her mind has deteriorated.

The play’s real location is in mind of the central character. Ultimately, it artistically transcends being a play about a tragic disease and becomes both an intriguing and tragic portrait of the human condition.