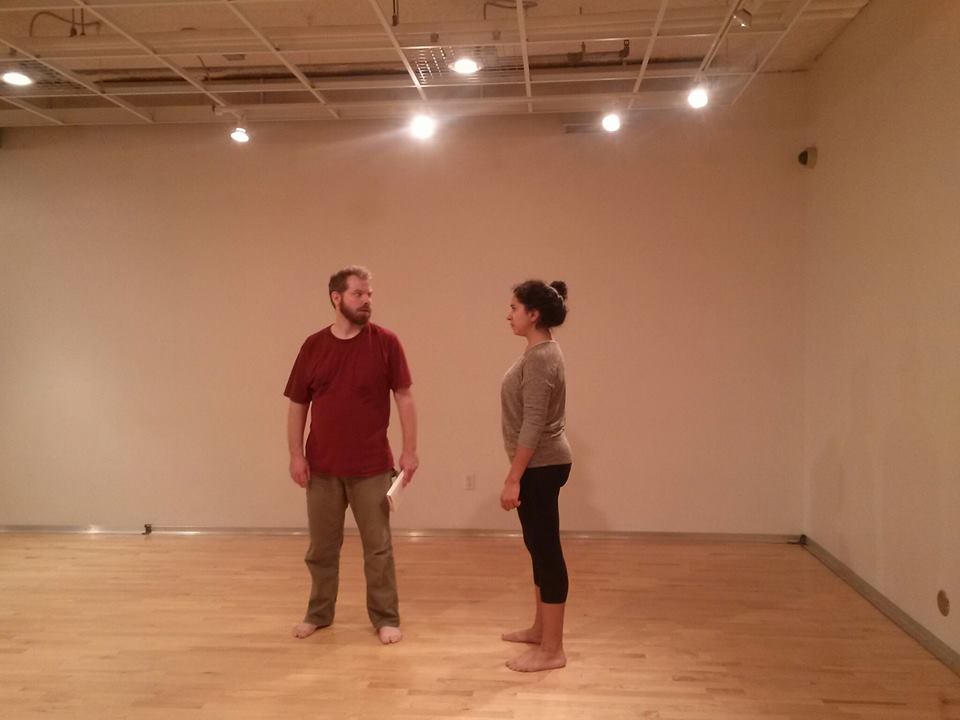 I know, I know. You can’t swing a dead cat in this town without hitting someone who’s starting a new theater company. But remind me again why that’s a bad thing? Sure, if someone’s starting a theater company just because it’s something to do and they have no real mission, that might be counterproductive. But I haven’t run into a whole lot of those enterprises. I think it’s great that we live in a city that has so many people with something to say, and so many clusters of artists who have a burning desire to work together and create something that, voila, new theater company.

And Little Lifeboats is definitely starting from the right place, getting Abby Swafford’s new script Parhelion out in the world. Now, of course, I have to admit to a lot of bias here. I was already a big fan of the four artists involved in launching Little Lifeboats. Erin Denman, Joy Dolo and Victoria Pyan were all actors in The Flowershop Project’s production of my dark romantic comedy Medea and Jason: Rubicon Waltz a few years back. Erin and Victoria and Abby Swafford have been participating in the writing group I help run for a couple of years now. The material cranked out by that writing group inspired Erin and Victoria to create a new play showcase called T.E.A.S.E. (The Easy Access Script Experience), which for the past two years has been a sold-out event bringing local writers and theater companies together to see excerpts from new plays and establish connections that lead to productions—which has happened in a number of ways and will continue to. Erin and Victoria directed, Abby stage managed and Joy acted in my recent Minnesota Fringe Festival production How To Date A Werewolf. Even people who didn’t like the play loved Joy, because every time she came on stage she was a new character, and she was amazing.

So yeah, my objectivity on this one could certainly be called into question. But all four of these ladies know that if I didn’t think Parhelion was a good piece of theater, I would say so. They’ve been honest with me, in order to make my writing better, so I owe them no less in return. If you doubt me, you can always go see Parhelion for yourself and call bullsh*t on me. But you really should see Parhelion anyway, because it’s a great piece of very human comedy that isn’t afraid to rough you up a little bit before the night is over. I like a play that’ll keep me on my toes, and Parhelion certainly does that.

“You’d rather have a guy like you than respect you.”

Parhelion is the tale of three friends—Ingrid (Cristina Castro), Chantal (Joy Dolo) and Hannah (Erin Denman)—as well as Hannah’s ne’er-do-well brother Mark (Matt Wall). They all grew up together in the small town of Bedabun, and Ingrid and Chantal still live and work there. Hannah moved away to “the big city” to try and start a different kind of life, but recently lost her job. Hannah has returned to Bedabun during Halloween season because it’s a holiday the three friends celebrate with their own special rituals. Hannah’s departure, return, and plans to go back to the city have uncovered tensions between the three women—all reevaluating where they are in their lives versus where they wanted to be by now, and how and whether any of that will ever change. Mark’s return to Bedabun to try and escape the consequences of bad decisions he’s made elsewhere only makes things more complicated when he strikes up a sexual relationship with Ingrid. Whether Mark and Ingrid’s dalliance can or should be more is something Hannah can’t help passing judgment on.

“The Disney Pocahantas or the 12 year old rape victim?”

The thing I love most about Abby Swafford’s script for Parhelion is that it never goes where I expect it to go. Everything I dread doesn’t come to pass—oh no, please tell me it’s not going to be another depressing story about small town life. Nope, not going there. Abby’s way ahead of me, and that whole genre of theater. Parhelion is a realistic assessment of small town life, why people stay and why people go. It’s funny, it’s honest, and it’s complicated. And because both choices are valid, Parhelion presents them as such. You have to make up your own mind what you would do.

“I think you’re confusing stripping with the circus.”

Oh no, please tell me it’s not going to be another depressing story about a woman involved with a guy who’s abusive. Nope, not going there. Oh, Mark is abusive. There is violence, and more importantly, the threat of violence. There is very real tension in a number of the scenes. Because with a character as volatile and angry as Mark in the play, things could go sideways at any moment. Sometimes they do. But the actions and the consequences always play out as real, rather than melodrama. A nod has to go to fight choreographer Zac Delventhal. Yes, you can sometimes see a fake punch thrown. But mostly the close combat moments, particularly between Ingrid and Mark, look so real they make me squirm and recoil in my seat.

“I do love him—out of obligation and fear of our mother.”

Oh no, please tell me it’s not going to be another depressing story about how when friends grow up they inevitably grow apart. Nope, not going there either. The fights between these women are both funny and painful, because they are real. Notions of race and class and gender are threaded through everything these women fight about, because those are big things worth fighting about. But these aren’t generic battles full of talking points. These are fights both large and small between people who care enough to tell each other the truth, and the larger realities of the world are always grounded in the specifics of who these women are. The fights never come out of nowhere. You can see them brewing, sometimes over the course of several scenes, before they explode. And there’s a lot of good natured ribbing that happens along the way that ultimately tips over into going too far. But these characters fight the way real people fight, and then they make up the way real people make up. There is no sentimentality that gives everyone a clean slate. The little nicks and scars from these scraps they get into are part of what makes these women who they are. It’s the scar tissue that has formed between them over the years that gives their friendship the strength and resilience it needs to survive.

“What have I ever taken other than money or things?”

Little Lifeboats’ production of Parhelion is all about the script and the performances and not about high production values. The lights go on, the lights go off. Just a couple of big bright lights throwing shadows. Probably the highest tech thing that happens is a couple of Google web searches and the display of a video clip from the classic cult movie Freaks (“One of us, one of us!”). They probably say a prayer every night that the internet connection holds up. The set is a recycled one from the previous production that shared the space (Mission Theatre’s Modern Prophet). It’s stripped down to the bare walls, all the doors removed, painted a neutral gray, and the multitude of framed, thematically relevant pictures aren’t even hung up on the walls. They sit along the floor, leaning up against the wall. A mattress used in some scenes but not others simply gets propped against the wall. Books and DVDs key to the friends’ identities share self space at all times in view of the audience. A high table serves for several different locations and never moves. The clothes the characters wear are so fittingly average and everyday that you don’t register them as costumes. You aren’t likely to see a lower-tech show outside of the Minnesota Fringe Festival this year. And you know what? That’s fine. All four of these actors and the script are so good, I’m just happy to watch them work. Nobody’s pretending not to have a small budget. This is as scrappy as theater gets. In fact, the program is so nice that it sticks out pretty starkly against the background of the barebones aesthetic of the rest of the night. (But seeing as the program is the thing going out into the world with the audience to help spread the word, it’s attention to detail in the right place.)

“By the way, that scarf’s not fooling anybody.”

The laughs and the tension in Parhelion balance each other beautifully. The production, directed by Victoria Pyan, trusts the script and the performances to carry the day. And they do. Abby Swafford’s precise use of language, and the reality of the dialogue and relationships between these characters, make Parhelion a real gem of a script. And these four actors make you believe in this small town world, and the desire of these people to make a connection, and make something of their lives. It’s ultimately uplifting, because these three friends know how to savor the little victories, alone and together. You really need to see Parhelion. Abby Swafford’s unique voice as a playwright, and Little Lifeboats’ mission to get new works out there, and let actors do their thing, are what a good theater town is all about.