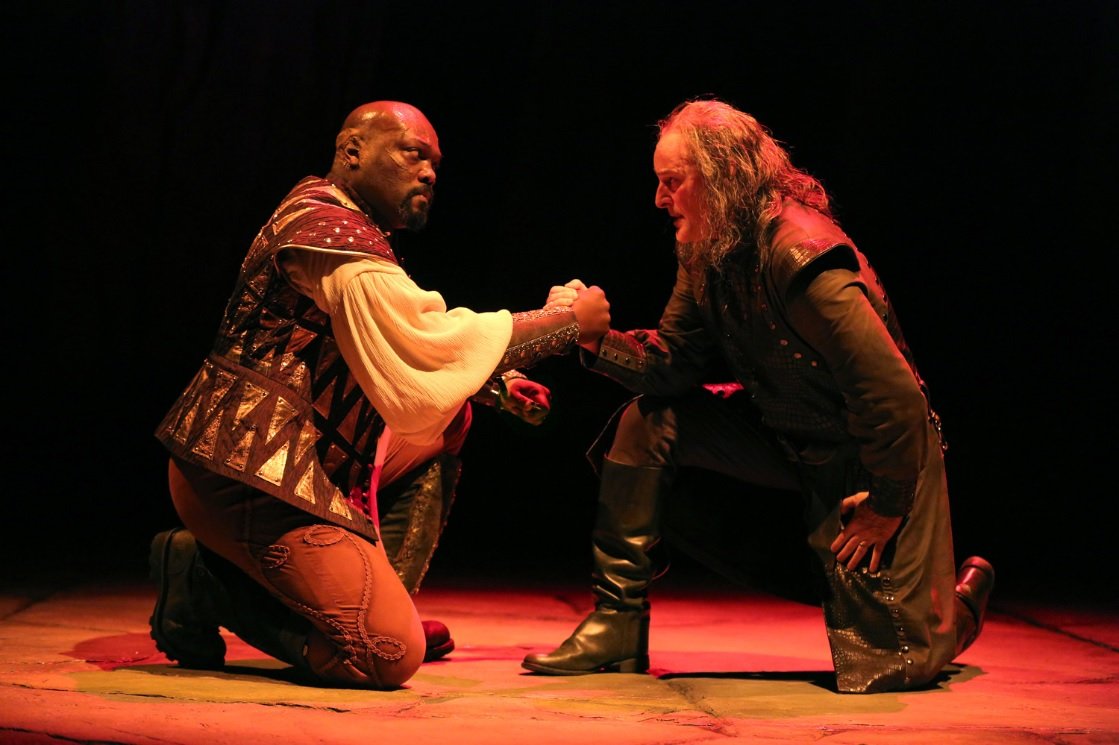 The Moor of Venice may have the play named after him, but it’s his not-so-trustworthy sidekick who steals the limelight in Shakespeare’s Othello. Iago (Stephen Yoakam) wreaks his bloody havoc practically in plain sight, but for much of three hours he is the master of the stage – seemingly everyone’s bosom friend and confidant even as he plots their demise. When the lights dim at the end of the show, Iago is captured, but not crushed; apprehended, but not defeated. Except for his own liberty, he has attained all that he sought.

Before slaughter breaks out on the Guthrie’s Wurtele Thrust Stage, however, there is something of a love story. Othello (Peter Macon) and his wife Desdemona (Tracey Maloney) begin the play with an endearing chemistry; by the dénoument, Othello’s affection has turned to devastating, steaming vitriol. Desdemona’s would-be suitor Roderigo (Kris L. Nelson) is unexpectedly firm: while the character is definitely not cut from the firmest stock, this portrayal has some welcome hints of backbone that make Iago’s manipulations seem that much more masterly. As meals go, Roderigo is Iago’s appetizer, Othello his entrée, and Cassio (John Catron) the dessert splurge. The women, to their misfortune, scarcely even register on this menu of death; when everything comes crashing down, Iago even declines to tip. Such is Shakespearean tragedy, and a delicious evening at that.

This fare is served with some splendid projections and other lighting effects courtesy of Michael Wangen. The billowing storm clouds in the distance and the slow fade from twilight into the dawn are especially well done; given the telescoped nature of this production, they work especially well to illustrate the passage of time. More obtrusive is the “evil lighting” that accompanies most of Iago’s private monologues; while tasty at first, its frequent reuse tips the table more towards melodrama than the rest of the courses might indicate proper. A little more moderation in its use would have been appreciated after the first two such scenes.

The second leg that this tragedy stands on is, of course, the titular Moor. Peter Macon’s Othello is powerful yet often soft spoken, with an exotic cadence to his delivery. This cadence implies volumes more about how the character fits into Venetian society than his lines alone might convey; it is also unexpectedly nuanced, changing according to whether the talk is of war or peace. Macon’s portrayal of the character’s slow breakdown into jealous rage is just as masterful as Yoakam’s turn as the manipulator. If not for the vague slight for which Iago hates Othello, these two could have had a magnificent bromance.