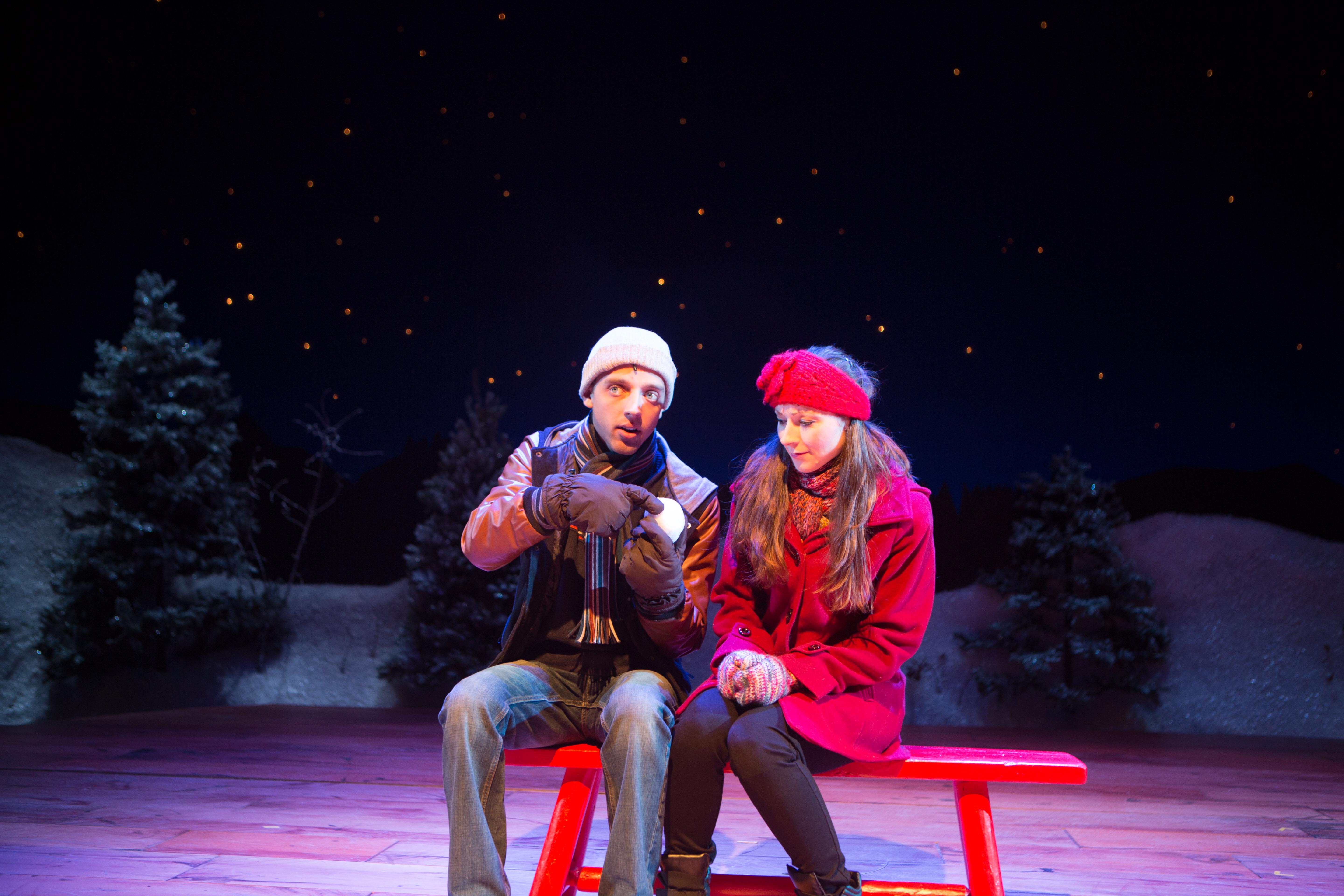 There is a scene in Almost, Maine when a shoe literally drops. This not hyperbole: A shoe actually falls from above. As leather and rubber strike the stage, a marriage slips from ‘troubled’ to ‘over’ with a finality that resounds in the silence. It is one of the most poignant moments in a play that is alternately comedic and touching. Love’s successes, failures, and tentative first steps unfurl delightfully in this new staging of Almost, Maine at the Old Log Theater.

The play itself is a series of nine lightly connected vignettes, with eight cast members playing some nineteen characters. Old Log regulars will recognize a few familiar faces, but not too many; for the most part, the different characters come across as distinct in their own right. Humor is interlaced, as is drama; scenes slide from one to the other under the cover of live guitar and harmonica music, with a few touches of elegant stagecraft and lighting courtesy of Erik Paulson. If you’re looking for high drama, this is probably not the play for you. If you are looking for a good time, a barrelful of chuckles, and some moments that tug at your heartstrings, then a trip to Excelsior might be exactly what the doctor ordered.

It is easy to get sucked into the fictional township of Almost, Maine; while the characters have their quirks and local color abounds, their romantic adventures and misadventures resonate with universal themes. A notable scene finds two male friends (Ian Zahren and Paul de Cordova) swapping stories of dates gone wrong – only for things to strike out in an unexpected new direction when the lines of friendship are crossed. It is a scene that could easily have been played as farce; R. Kent Knutson’s direction instead brings out a sincere awkwardness that is that much more compelling for its veracity. This is equally true when regret and missed chances loom large in another vignette; other scenes see ultimatums, desperate romantic gambles, and unexpected magic playing out.

The magic is wonderful to experience and deadly to overlook. In the above-referenced shoe scene, the audience witnesses the final breakdown of a marriage as a wife (Lisa Bark) tries vainly to recapture the magic of her first kiss with her husband (Greg Eiden). Their problems are neither new nor novel, but the portrayal is sincere and the acting strong; one can’t help but empathize as they travel down this familiar road – even while chuckling at the strange things couples do to each other.