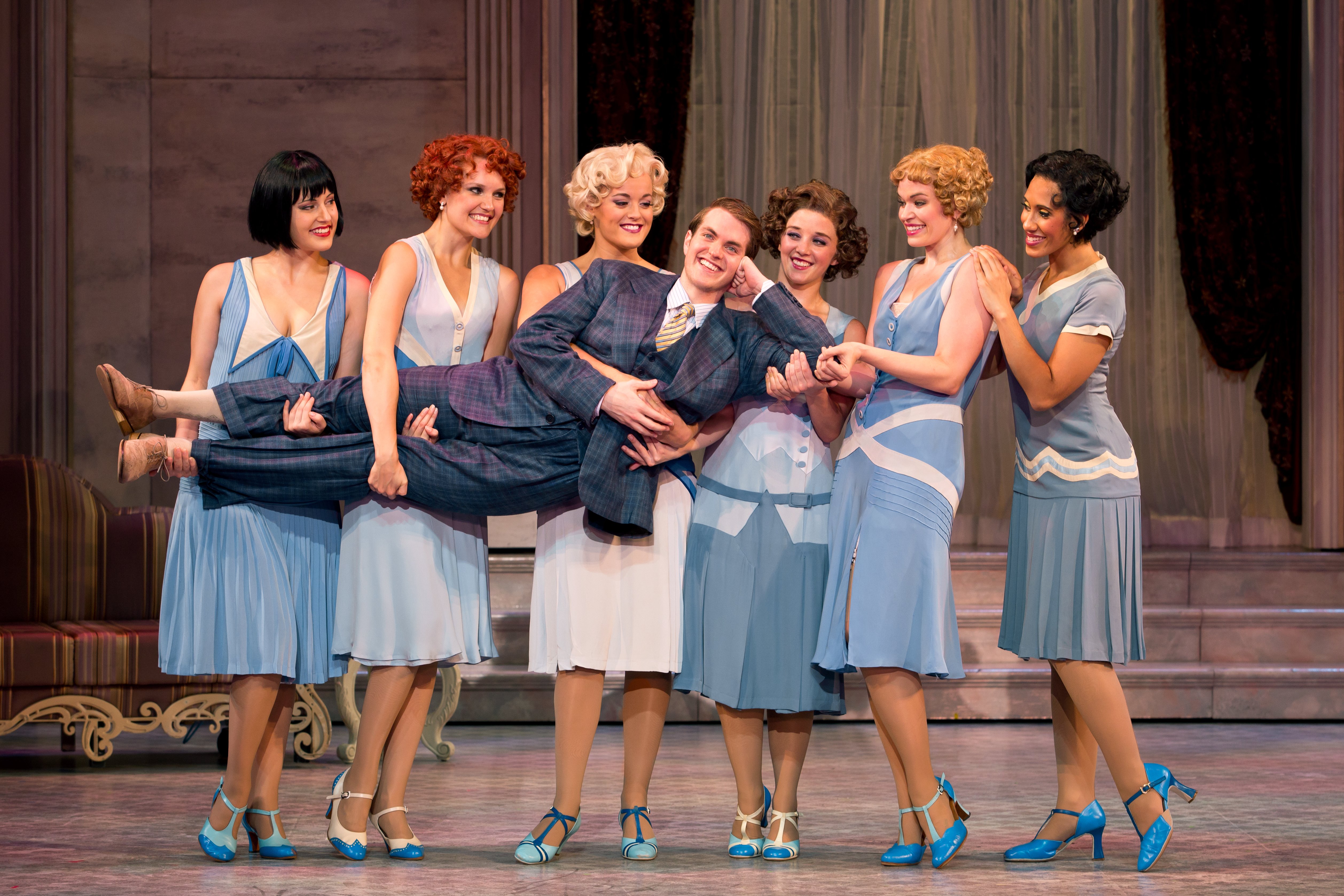 Jimmy Winter (Alex Enterline) has lots of problems, and being loved by the female ensemble of Nice Work If You Can Get It is most of them. Photo by Jeremy Daniel.

They say that you can’t teach an old dog new tricks, but by golly the team behind Nice Work If You Can Get It has given it the old gangster try. This Gershwin jukebox musical passes the time pleasantly, forgoing musical innovations for tried and true melodies and a farce of a plot that steadily amps up the ridiculous complications.

There’s a particular quality possessed by the Bugs Bunny cartoons with Chuck Jones’s personal stamp on them. It’s not that the work of his successors isn’t funny, but the pleasure never seems quite as deep and it doesn’t just play as well on repeat. This is not necessarily a deal-breaker—not every cartoon can be What’s Opera, Doc?, after all—but there’s a definite trap to too great a familiarity. Nice Work here is up against stiff competition from a legion of other Gershwin jukebox musicals, several prepared by George Gershwin himself.

So how does Nice Work If You Can Get It navigate this theatrical minefield? Mostly by embracing its absurdity. Many aspects of the plot recall classical Warner Brothers cartoons, with characters feeding each other lines, stealing obnoxious smooches, and generally upsetting any attempts at prolonged seriousness. This is especially true with the song deliveries; although anything is possible in the Age of the Internet, this is very probably the only time that you’ll see “Someone to Watch Over Me” sung while the singer (Mariah MacFarlane) cocks a shotgun, to hilarious effect.

This “Gershwin as you’ve never seen it before” twist is at its best when completely unrestrained by reality, like when stream after stream of chorus girls and chorus boys erupt from a private bath (“Delishious,” delectably sung by Rachael Scarr). Another memorable number loads up the show’s anti-liquor battleax (Stephanie Harter Gilmore) with gin, sending her swinging from the chandelier to the strains of “I’ve Got a Crush On You.” Many of the most memorable song performances are the least well known, perhaps due to this sense of freedom.

Score and plot aside, one of the weaker aspects of the show is its lighting: many of the scenes are simply too dark. The opening number has some lovely costumes that should be quite eye-catching, were they not draped with dim glows and shadow. The dancing is sharp and the acting well-delivered, if only it could be glimpsed better when mood lighting strikes. This is hopefully something that will be addressed as the show continues its run, as it’s eminently fixable.

Nice Work If You Can Get It is not the most original show, but it does pass the time well with a lot of laughter. The first act is slow in patches, but the second act moves at a speedy clip as it ups the ante. If you haven’t seen a Gershwin show in the last year, it’s not a bad way to hear some old musical friends and meet some new ones.