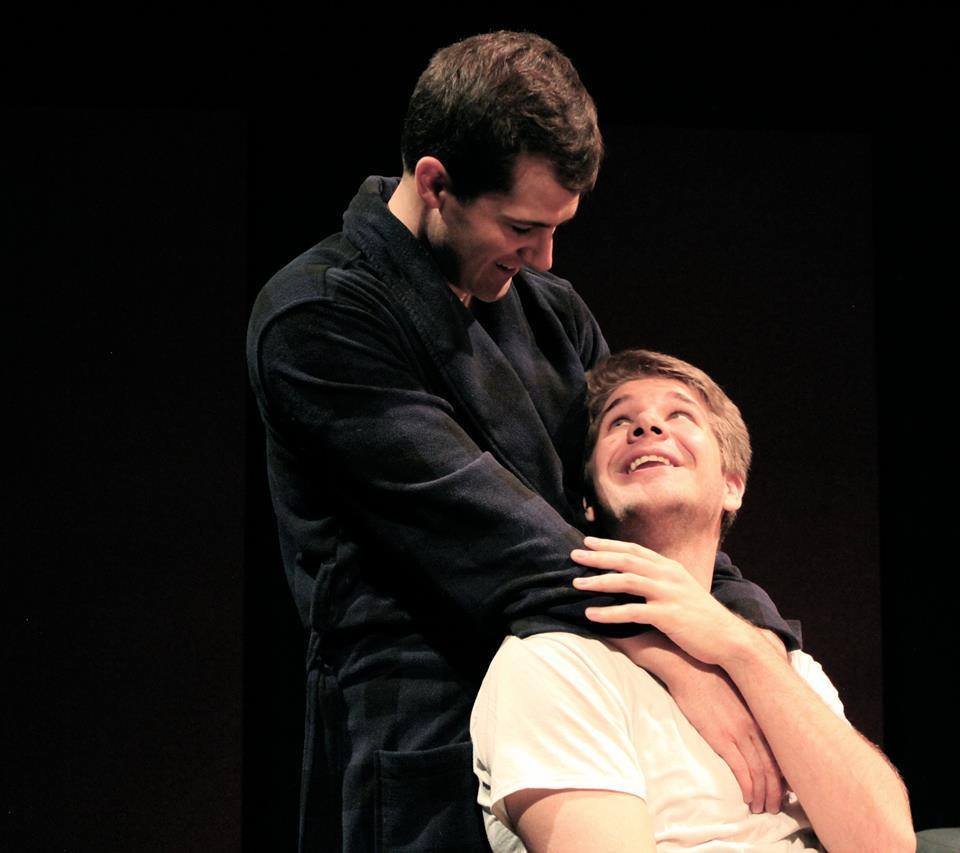 What if Adam (Josef Buchel) a gay man with no religious upbringing struck up a relationship with a younger gay man Luke (Daniel R. Flohr) who came from an evangelical Christian background? What if they moved in together? What if the young man kept putting off telling his parents Arlene and Butch (Julie Ann Nevill, H. William Kirsch) that he was gay, and that he was in a committed relationship for over three years? What if the young man was hit by a car, and his lover and those parents met for the first time at the hospital and were suddenly forced to deal with one another in an incredibly tense situation of crisis? Sounds like it could be a really compelling, moving play that explores the tension between religious faith and human sexuality, plus the evolving definition of family, right? Well, we got Next Fall, so it’s a start.

“It was quirky for, like, ten minutes. Now it’s just rude.”

Revisiting my review of the Jungle Theater’s regional premiere of Next Fall just three and a half years ago, I was surprised to find how positive it was. Yes, I took the script to task in a lot of quarters, but I gave it a very generous portion of benefit of the doubt the first time I saw it. I can remember anticipating the production because I’d read about its New York debut. Off-Broadway to Broadway transfer, two Drama Desk Award nominations, two Outer Critics Circle Award nominations (and one win), and two Tony Award nominations, including one for Best Play. I was excited that the play was surfacing in Minneapolis so soon after its big East Coast success. I was ready to make a lot of excuses for it, and I was also setting myself up for major disappointment and frustration.

Because I yearn for plays that don’t treat people of faith like one-dimensional reactionary idiots. And I yearn for plays that don’t treat gay men like godless oversexed disease-ridden miserable freaks destined to die an early death. You can be Christian and gay. It’s a struggle, but it’s possible, for both the individual and their family, as well as their larger church family. And that’s a struggle I’d pay to see. It’s why plays like Angels In America continue to fascinate and bewitch me despite repeated viewings and even more repeated readings. Last time I saw Next Fall, I wondered aloud whether the author even knew any Christians and if he did, if he’d bothered to talk to them before writing his play. This time I started to actively ponder whether the playwright was even gay.

“You tell someone ‘no’ long enough, they start believing it.”

Thankfully a quick Internet search answered loads of questions. Not only is playwright Geoffrey Nauffts gay, he’s partnered with, probably now married to, a man who grew up evangelical Christian. His husband wasn’t out to his family. Nauffts worried that the situation that happens to Adam and Luke in the play might happen to them. So he’s been introduced to the family, they’ve spent holidays together, they’re thinking of raising kids now, etc. All of which is lovely and makes a play like Next Fall even more baffling. Because Nauffts knows better. He’s lived a more nuanced existence than that with which he provides his characters. He doesn’t even have to invite a Christian friend out for coffee to talk about religion. He can turn over in bed and talk to one. WTF?

Like the Jungle production that came before it, the current production of Next Fall from BOOM! Theater, is a much better production that the play itself probably deserves. Artistic Director (also Director, Set Designer, Sound Designer, Prop Designer, Costume Designer as well as cast member in the role of Brandon, phew) Patrick Kozicky has assembled a strong team of performers here and he guides them well. The actors are all working their tails off to give these characters some real human dimension and emotional and intellectual depth. The script for Next Fall fights them the entire way with unnecessary jokes, contrived circumstances, people being selectively stupid to advance the plot (or jokes, mostly for jokes), and other maddening incidents of generally lazy writing.

The friend who attended the show with me is straight, raised Calvinist, and he, too, was lamenting about the fact that often “Christian stories” are over here, and “gay stories” are somewhere over there. Next Fall, in his opinion, is bringing together things that should never have been apart in the first place. With material this rich and an opportunity this rare, why isn’t Next Fall a better play?

“It’s like Shakespeare. Why are we still doing him after all these years?”
“Yeah, what a hack.”

It might have to do with the fact that the first time Adam sees Luke praying, ever so briefly, over breakfast the morning after they first have sex, he looks at Luke like he just farted. When pressed, Luke defines himself as Christian. The words evangelical and fundamentalist, to my memory, never leave anyone’s lips on stage. Christian is used to paint everyone of faith who believes in Jesus with a broad, intolerant brush. Evangelical is something I got from online research into Nauffts and his own living situation. But that’s the kind of Christian we’re seeing here. The kind that borders on being un-Christian in their treatment of certain people. The kind that believes the Bible is the inerrant word of God, is to be taken literally, and thus things like the theory of evolution or the fact that the Earth is more than 6,000 years old are not to be tolerated. The kind that can’t wait for the Rapture. The kind that consigns everyone that doesn’t believe in their own particular brand of Christianity to an afterlife of eternal hellfire. (And again, even within this brand of Christianity, there’s still a wide range of different schools of thought. Next Fall is really simplistic in its treatment of people of faith, which is a shame.)

“There’s an organ transplant representative back there smiling at everyone. It’s creepy.”

Because evangelicals are just one part of Christianity. It’s certainly the subsection of the faith community that often screams the loudest, but they are not the majority. There are so many different denominations in the Christian church it makes one’s head spin. Catholics and Baptists and Lutherans and Methodists and Episcopalians and Quakers and Mormons and Unitarians and Jehovahs Witnesses and Pentecostals and I could go on, that’s not even taking into account all the different branches and subdivisions within any of those labels. Just like there’s more than one type of gay person, there’s more than one type of Christian. Christians are not all intolerant morons any more than all homosexuals are self-loathing miserably conflicted neurotics – but that’s all we get Next Fall.

On the selectively stupid for the sake of a joke front, we’re supposed to believe that Adam, in school hailed as a young writer of enormous promise, has not even a basic working knowledge of Thornton Wilder’s play Our Town. Our Town, a staple of high schools and community theaters for over three-quarters of a century. Written by a gay man, I might add. Not only does this lame gag recur, but then the ending of Next Fall includes a character recounting an enormous chunk of the plot of Our Town, so the play can somehow piggyback on the work Wilder’s already done. I guess I should be grateful it wasn’t another reference to the Wizard of Oz, one old-school gay stereotype this play managed to avoid. Thornton Wilder gives the larger straight world of 20th century theater Our Town. The gays of the 21st century have to settle for Next Fall.

“Give me an argument that means something.”

Also, powerful as it can often be, killing a character is the bluntest of objects in a writer’s bag of tricks. It’s a cheap and easy way out of a complicated situation. Death levels the playing field, cancels all bets. You know what’s harder? Living. That’s what makes for a thornier, more complex, more compelling narrative—people whose struggles don’t get to neatly end because they check out, people who have to find a way to make life and the relationships around them work. Have the balls to make your characters stand up and fight for something. Don’t give yourself, or them, an easy way out. Though I have to admit it’s fun on a certain level, I’m starting to despair at the sheer number of pieces of entertainment—movies, TV, plays, books – where I can toss around a variation on that ridiculous eulogy from Heathers, “I love my dead gay son!”

“He chose you. Isn’t that enough?”

Just like the last time I saw it, Next Fall does serve the useful purpose of prompting the audience to have spirited discussions of the issues the play itself fails to adequately address. It also offers us some really wonderful moments of acting, despite the source material. Oddly enough, the moment that struck me the most didn’t have any dialogue at all. It came near the end of a scene where Luke was trying to comfort Adam, who was stressing out about possible health issues he might be having. Adam admitted he wished he could find comfort in praying the way that Luke always does. Luke gently encourages Adam to give it a try. So they sit, quietly, side by side. Luke bows his head and closes his eyes, praying silently. Adam tries to follow suit. The look of happiness on Luke’s face, communing with his God, with his boyfriend beside him, is pretty breathtaking. The conflicted look on Adam’s face, like he’s trying, isn’t sure if it’s working, maybe a little afraid of what it means if it does, but also a little hopeful, is the most honest and respectful moment Adam has in regard to religion during the whole play. Director Kozicky wisely allows this moment to just play out. Both Flohr as Luke and Buchel as Adam stay in that moment longer than you think anyone might be comfortable, and man, it really works. Moments like that are what make me wish the play was better than it currently is, these glimpses of how good it could be.

“All of a sudden I can’t speak. I’m afraid I might break him.”

Nevill and Kirsch as Luke’s parents Arlene and Butch manage to overcome a lot of the dumb jokes and cookie-cutter bigotry and offer portraits of parents that aren’t as clueless or backward as everyone thinks they are (including the playwright). Kozicky manages to make Brandon into more than just a sounding board or plot device, making the most of the meagre material he’s presented with which to build a character. And Amy Schweickhardt, not surprisingly, takes the thankless role of the “fag hag” and imbues it with such guts, strength and purpose that you could be forgiven every time she’s on stage for mistakenly believing the play is really somehow about Holly. She grounds the whole weird story in something that comes the closest to how real people speak and act in such uncomfortable situations. Thanks to Schweickhardt, I sort of wish I had a Holly in my life, too.

“If it was that easy, who wouldn’t swallow it?”