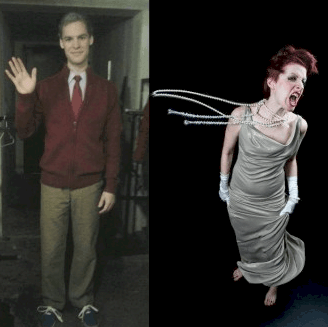 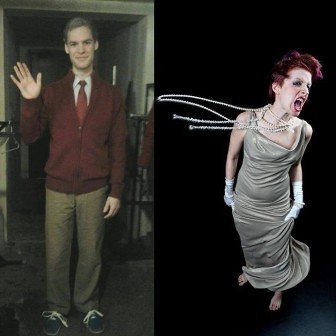 This past spring at Billy Mullaney’s Uncreativity Festival, the audience was treated to a lot of shorts, but also a few tantalizing excerpts of much longer works.  Having whetted the audience’s appetite for more, Mullaney brings back two of those pieces in longer form – visiting Seattle performer Erin Pike presenting a new iteration of That’swhatshesaid, and Mullaney’s ongoing exploration of Mr. Rogers’ Neighborhood.

“There’s only one in this wonderful world.  You are special.”

Both pieces engage in the use of appropriated text.  Pike, in collaboration with playwright Courtney Meaker and director HATLO (yes, that’s her name, all caps), is taking lines out of the mouths of female characters in the most-produced plays of the 2014-2015 theater season (a list compiled annually by the Theater Communications Group [TCG]).  Hence, the title That’swhatshesaid.  Their first stab at this last year used the 2013-2014 most-produced plays list, which turned out to be a bit of an outlier.  That list of 12 plays was split equally down the middle between male and female playwrights, six and six.  The just completed theater season reverts more to form, which is to say less representation and production of women playwrights.  So the lens on female characters is a decidedly male one.  This version is still a work in progress but a very intriguing one.  The first section is the female characters in plays written by men.  The, decidedly shorter, second section is the female characters in the plays written by women.  Taking the lines – and related stage directions – for the women as the raw material for this piece makes for a very illuminating portrait of the state of women onstage in modern theater.

The most produced plays last year were: Vanya and Sonya and Masha and Spike by Christopher Durang; Outside Mullingar by John Patrick Shanley; Bad Jews by Joshua Harmon; Other Desert Cities by Jon Robin Baitz; Around the World In 80 Days, adapted by Mark Brown and Toby Hulse from the novel by Jules Verne; Peter and the Starcatcher, adapted by Rick Elice from Dave Barry and Ridley Pearson; The Whipping Man by Matthew Lopez; Into The Woods, book by James Lapine, music and lyrics by Stephen Sondheim; Venus In Fur by David Ives.  The two women who break into the top 11 are: Nina Raine’s play Tribes; and Amy Herzog’s play 4,000 Miles.  From these 11 plays, there were 74 roles total.  31 of these roles were written for women.  Of the 31 female roles, six were written for women by women.  That’s a daunting place to start.  It’s even more daunting when you start to hear some of the dialogue (and descriptions) that men write for women.  I’m sure they don’t mean to be insulting, but when you hear them out of their original context – all lined up together – it’s kind of mind-blowing.

“Is she a molecule, or a TV weather person?”

While I found it a fascinating exercise in deconstructing a portrait of today’s theater scene, the actress friend next to me when the lights came up simply said, “Well, now I’m depressed.”  On the flip side, as a writer, I was thinking, “I need to write more (better) roles for women.”  But that wouldn’t really help the larger problem – which is more representation by women playwrights, who know the subject a little more intimately and can bring some much needed nuance and complexity to the table. Right now, the portrait of women on stage that’s up for mass consumption by theater audiences is in need of some balance.

That’swhatshesaid is structured and executed in very clever ways.  It wasn’t until afterwards that I realized – “Ah, the stage directions from the plays written by men were done in voiceover by a man, and the plays by women, a female voiceover.”  At first, a key sound effect is unclear, but the further one goes into the women in these plays, the more clear it becomes that the sound effect is of someone turning a page in a script.  They’re turning the page in search of the next line spoken by a woman.  There’s one extended sequence before the end of the male writers’ section of the performance where the page turns, and turns, and turns, and turns, searching in vain for more words from the mouth of a female character. Performer Erin Pike is onstage portraying all these women – from 13 to 90 years old – while director HATLO is seated at a table off to the side of the stage turning the pages of their script in reality.  Sometimes Pike borrows a page, as she memorably did for her sequence from Around the World In 80 Days, where the female character keeps addressing her fellow character as Mr. Fogg.  She is extravagantly in love with him, to the point of hero worship, ever so grateful to him for saving her life.  It goes from being over the top funny to more than a little uncomfortable.

“I thought you might find me ugly and there’s no answer to that.”

Uncomfortable comedy is the order of the day as Pike mugs for the ludicrous stage directions, and invests the dialogue with all the truth she can muster.  These characters are represented by hash marks she writes on her arms as we go (she has plenty of room left over on her arms when she’s done, unfortunately).  A lot of the characters are stuck asking questions about other characters, sometimes just the most basic of prompting questions – Who? What? – and then a whole bunch of listening to the men talk (which we don’t hear, so, silence).  Pike has great comic timing and playwright Meaker has constructed this compilation artfully, so you get a lot of laughs – right before your brain starts thinking, “oh, wait, that’s not really funny in the larger sense, is it?”

“She’s a blank to be filled in by creatures who at heart despise her.”

That’swhatshesaid acknowledges its debt to actor/writer Dylan Marrow’s youtube project Every Single Word – which presents all the lines spoken by a person of color in recent mainstream films.  The fact that they can be contained in a basic youtube video gives you an idea of the brevity of the source material.  Director HATLO questions: “Who is empowered and legitimized to tell stories?  How are they representing the people they are speaking for?”  HATLO also admits that if you applied the That’swhatshesaid model to theater’s inclusion of “other underrepresented identities: queer people, people of color, people with disabilities – the play would absolutely be shorter and, most likely, the characterizations even harder to watch.”  Looking at women on stage in isolation makes for a challenging snapshot of today’s theater.

Mullaney makes full use of the Open Eye Figure Theater stage to give us a low-tech recreation of a full episode of Mr. Rogers’ Neighborhood.  Tackling this character without irony for a full half hour is more of a challenge than you might expect in our sarcastic 21st century.  Mullaney describes Fred Rogers’ kindness as “anachronistic” and that is both sad, and very true.  The things that captivated me when I saw this resurrection of the spirit of Mr. Rogers’ Neighborhood in miniature in the Uncreativity Festival still captivate me here in long form.  First, of course, it harkens back to my own childhood sitting in front of the TV watching PBS (my earliest frame of reference for Morgan Freeman, for example, was his time in the cast of The Electric Company).  Here, though, Mullaney doesn’t just take the stage by himself as Rogers – there’s a full-on trip to the Land of Make Believe, complete with King Friday XIII’s castle inhabited by the King, Queen Sarah, and Prince Tuesday.  There’s the beloved (and anthropomorphized) trolley, Lady Elaine Fairchild, the daily feeding of the fish (yes, live fish in a fish bowl), even a traffic light as part of the decor.  Mr. Rogers also gets a call from some musician friends – here, the Lux String Quartet of Erika Olson Bianco, Sam Rudy, Benjamin Davis, and Lars Krogstad Ortiz – and goes to visit them in their studio.

Along the way, Mullaney as Rogers questions and explains things so patiently and simply, it doesn’t seem like he’s exercising a great deal of patience at all.  This gentleness of personality is built into the fabric of the show.  Mullaney also channels Rogers’ sense of wonder and appreciation of things that we quite easily take for granted.  Again, judging by the laughter of the audience, some laughing with him, but others I think laughing at him, maintaining that demeanor without winking at the audience is harder than you think.  And taking it in, in the spirit in which it’s intended, is perhaps equally hard.  We keep waiting for the punch line that never comes.  Rogers is genuinely interested in the well-being and the self-esteem and growing, questioning minds of children.  He engages his audience of neighbors not by talking down to them, but by giving them credit for being able to learn, and maybe even talk about things (like going to the hospital) which might scare them.

“Have you always liked playing music from when you were little children?”

A little oasis of songs, mischief with puppets, and an adult’s full undivided attention – it seems like such a simple concept, but not everyone can execute it with such care.  Fred Rogers did it for over 30 years, almost until the very end of his life.  Mr. Rogers and the TV show he’s known for have been gone for over ten years now.  The fact that Mullaney is taking up Fred Rogers’ mantle – complete with comfy red sweater and a pair of sneakers – seems both strange, and an oddly perfect fit.  This word for word evocation of another brand of storytelling and performer addressing an audience is a fascinating experiment.   The longer Mullaney stays in character, the more the audience has an opportunity to relax, let its guard down, and genuinely visit Mr. Rogers’ Neighborhood.  Eric Mayson’s piano playing is perfectly in the spirit of the original, and a marvel to listen to – a great supporting player following Rogers through his day.  Mullaney also has able support in creating this world from Eric Larson, Rachel Petrie, and Jane Rennick.

“I’ll be back when the day is new.
And I’ll have more ideas for you.
And you’ll have things you want to talk about.
I will, too.”

Mr. Rogers’ Neighborhood and That’swhatshesaid share a double bill together but each is brief, only about a half hour each, with a half hour between the two.  So it’s a pleasant and thought-provoking way to begin your evening, and still have some of it left when you’re done.  Both take your brain to places you probably weren’t expecting to go, but are well worth visiting.