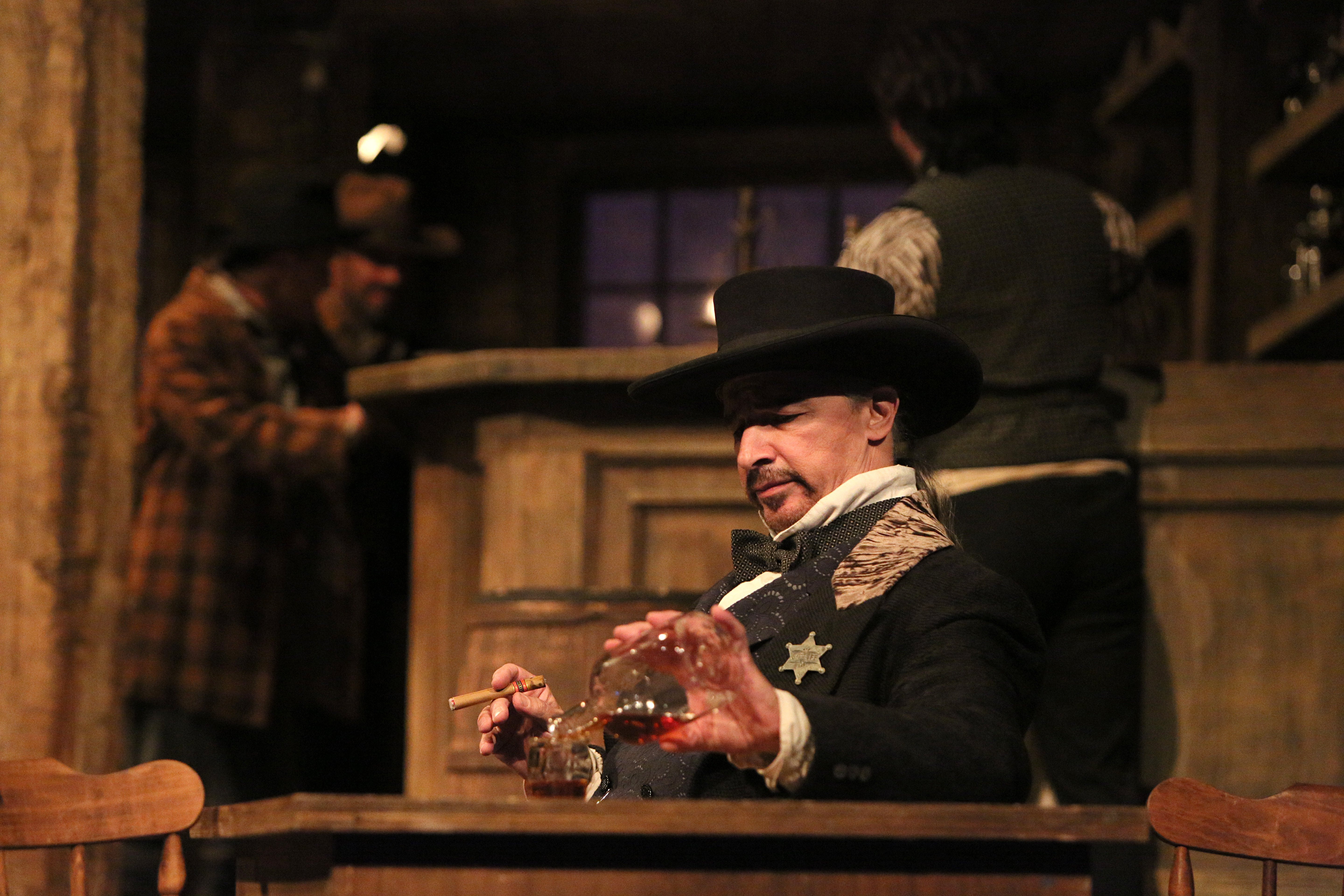 The Twin Cities opera scene kicked into high gear on Saturday with Minnesota Opera’s annual gala and opening night of La fanciulla del west. The opera’s live performance at the Ordway was simulcast into neighboring Rice Park, courtesy of grants from the Knight Foundation and the St. Paul Cultural Star. The outdoor event drew an audience that began assembling more than two hours in advance and stuck out through a pre-show rainsquall.

La fanciulla del west (“The Damsel of the Wild West” comes closest to the Italian title’s spirit) is one of Puccini’s less well-known operas; although it is periodically staged, most fans know it strictly from recordings. The story is a Western fable about the California Gold Rush, with a cast of rough-hewn gold prospectors, frontiersmen, and the titular damsel that they all adore: Minnie (Claire Rutter). Much of the narrative unfolds in a frontier mining camp, where routines are upset by the arrival of the bandit Ramerrez (Rafael Davila) and his budding relationship with Minnie. This being the Wild West, gunshots, rivals, and bitter jealousy soon dog their forbidden romance. The onstage action unfolds with an exquisite score, at times recalling episodes from the better-known Tosca and La bohème.

One area that La fanciulla differs from its counterparts is in its number of arias: there aren’t simply aren’t many standalone musical set pieces. Instead, the music organically expands and contracts according to the intensity of a given moment in drama, eschewing stylistically separate recitative and aria except for a few select occasions. This places a heavier acting burden than normal on the cast, and a heavier vocal burden on the singer playing Minnie in particular. Fortunately, Rutter rises admirably to the task; as Minnie, she commands the stage at all times, mixing smooth charm with a tough-as-nails personality hiding beneath.

The two main rivals for Minnie’s hand are Sheriff Jack Rance (Greer Grimsley) and Ramerrez. Grimsley’s glowering bass voice is an excellent fit for the brooding character, especially in the finale when he malevolently crows about hanging his rival. Tenor Rafael Davila’s near-swan song, “Ch’ella mi creda”, would have made a fine curtain-closer on its own. Davila and Rutter’s onstage and vocal chemistry sparkles from their first shared scene.

Doug Scholz-Carlson’s direction worked excellently in the opening crowd scenes, giving a strong sense of many individuals and groups within the larger mass. Act III was more inconsistent: many group entrances and exits at the start seemed busy rather than purposeful. Several moments in the dénouement also felt unscripted, with cast members milling in place; only as “E anche tu lo vorrai, Joe” came together did the sense of a larger group gel again. This may have been an intentional effort to not distract from some of the opera’s most beautiful singing, but it came across as incompletely rendered.

Some elements detracted more strongly from the overall experience. The opera orchestra was in generally strong form on Saturday – too strong, as a fact, when it covered up Minnie/Rutter when her voice dipped into lower registers. This made the Italian lyrics quite difficult to make out and exposed a more general issue with the supertitles. Quite simply, the supertitles often do not show translations that match the text being sung. On one extreme, translations tended to arrive in too-large chunks that spilled the beans about what was being said, undermining dramatic tension and telling jokes too soon. On the other extreme, the projection screen sat blank for much of the complex ensemble pieces that are such a highlight of the score – a real shame, because the interlocking lines of music and text are much more marvelous when you can actually tell what’s being sung. The English translation also missed several key parallels in the Italian text, especially when Minnie explains why she loves Ramerrez.

These criticisms are not intended to overshadow what is, overall, a very pleasing performance of a beautiful gem from the opera closet. Dialogue and text are so key to this opera, however, that not smoothing out the rough spots would be a shame – and just because a set of supertitles is used at the Metropolitan Opera doesn’t mean that it should be accepted as-is.