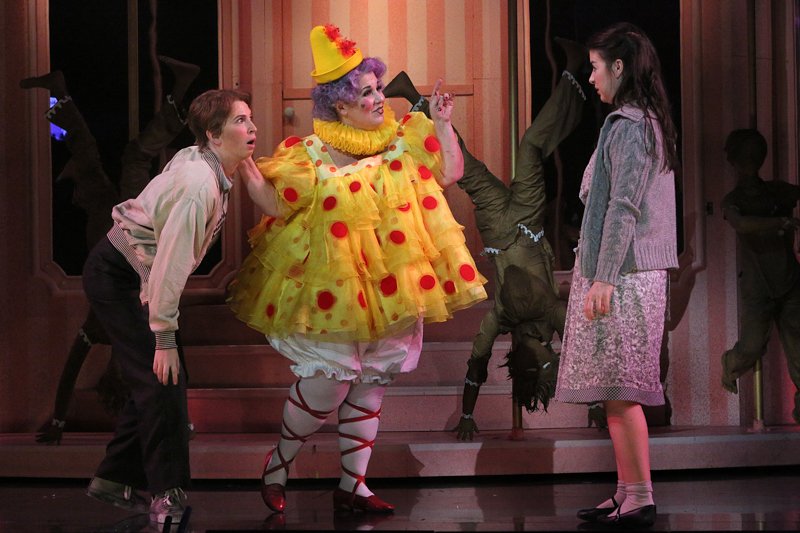 Hansel and Gretel was a beloved fairy tale long before it was collected by the Brothers Grimm and published in 1812. In this classic story, the eponymous children are sent into the woods by an angry mother and run afoul of an evil witch who ensnares them with a mix of magic and alluring candy. For parents who think trick-or-treating has gone too far (and those who just enjoy a bit of demented fun), Minnesota Opera’s decision to open the opera the day after Halloween is a piece of genius.

Most productions of Hansel and Gretel stay close to its roots, using a rustic, pre-industrial setting for the story. This staging goes farther afield, transplanting the action to the Great Depression and turning the witch’s forest into an abandoned amusement park named Playland. Monsters become carnies and clowns, the gingerbread house a strikingly decorated carousel, and the witch…well, a picture says a thousand words. Although there are a few bruised edges, as a whole this re-envisioned production is fresh, appealing, and visually fun.

Much of the opera is carried solely on the backs and voices of Hansel (mezzo-soprano Stephanie Lauricella) and Gretel (soprano Angela Mortellaro). This pair is excellently cast, playing off each other with dynamic sibling chemistry; many small touches from stage director and choreographer Doug Varone enhance the authentic and compelling delivery. Mortellaro’s performance as Jean Acker in last season’s The Dream of Valentino was sweet but too brief, but this role gives her far more stage time – and showcases far better her ringing voice and vibrant stage presence. Lauricella’s portrayal of Hansel is laced with bursts of adolescent fire. Both are a joy to listen to and watch.

Speaking of watching, there is a lot to enjoy visually as well as musically. The set and costume designs are both clever and visually interesting, and enhanced with neat touches of stagecraft; more than one scrim hides a head-turning reveal. The lighting and shadow effects, courtesy of Robert Wierzel and Marcus Dilliard, also play a significant dramatic role, especially when the children’s father (Craig Irvin) vividly describes the dangers of Playland and its resident witch (Marianne Cornetti, also playing the children’s mother). Once she dons her witch-clown garb, Cornetti dazzles vocally and visually as she twirls malevolently around the stage.

Accommodating this new setting is done principally by changing a few English supertitles while leaving the sung German intact. These changes are often humorous and infrequent enough to minimize distraction, but there are a few points where some additional license would have been welcome to remove plot problems–such as when the father arrives and, without having set eye on the witch before, instantly and without prompting identifies her as a giant cupcake. Garbing the Sandman (Shannon Prickett) and a wordless compatriot in shiny white suits furrowed brows in confusion, and picking strawberries from ornamental trees is just botanically inaccurate.

These distractions are the exception, however, and not the rule; most of the tweaks introduce excitement and unexpected humor. The arrival of a rather pissed-off Dew Fairy (Siena Forest) to wake the children, for example, occasioned nods for the coloratura and laughter for the unfortunate chorus members to cross her path. The carnie chorus of dancers (most of whom are members of Zenon Dance Company) is sinisterly charming – not unlike Hannibal Lecter – and the 24-member children’s chorus well-drilled. The lush score sounds excellent under visiting conductor Anne Manson’s baton, with none of the problems with covering over singers from certain productions earlier in the year. Her direction also highlighted many interesting aspects of the lush orchestration that are often covered or rushed over, and appropriately adjusted for a dance scene that could have been taken out of the Ziegfeld Follies. Minnesota Opera’s production is not your parents’ Hansel and Gretel, but with a few demented clowns and musical comedy flourishes it’s all the more fun for it.