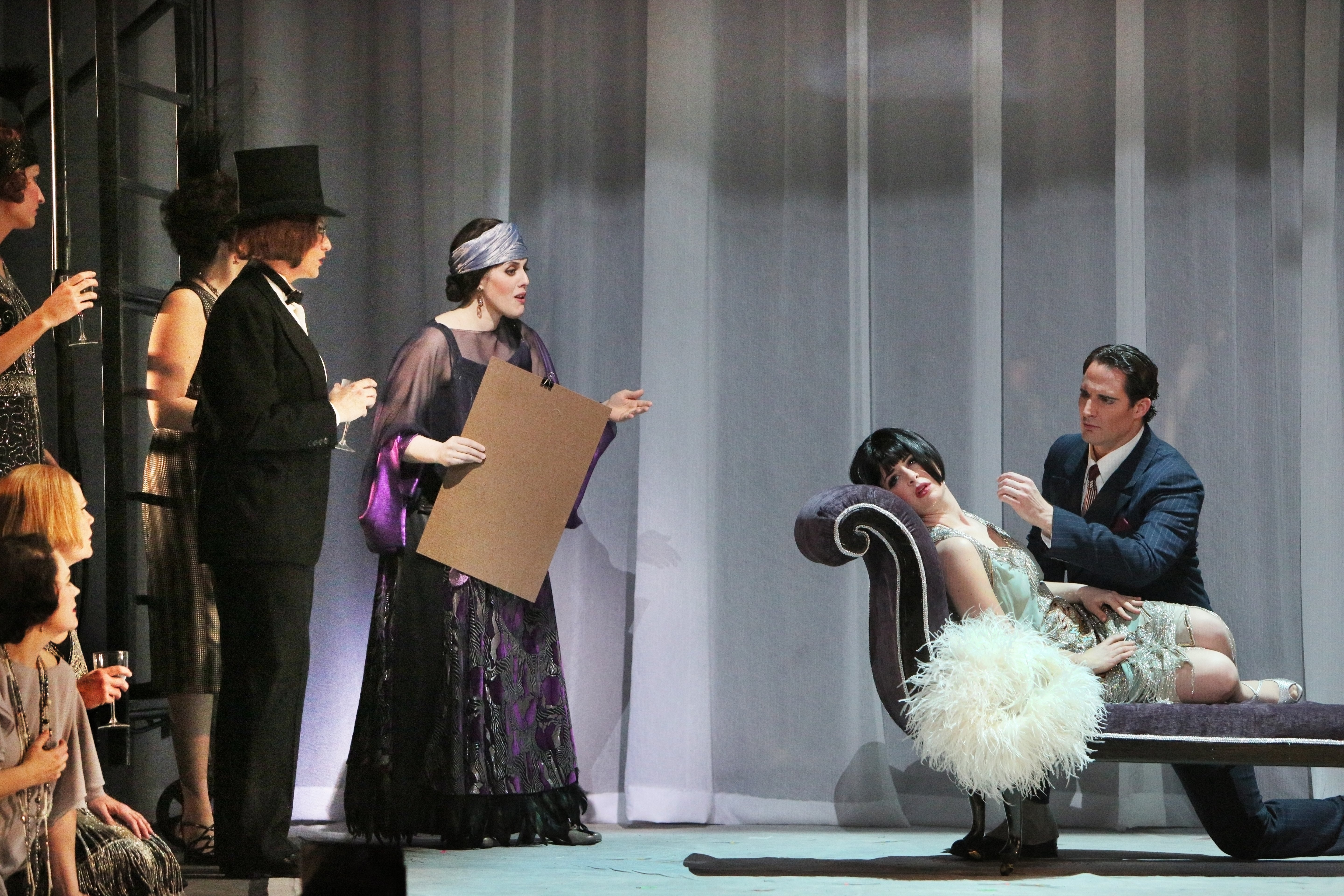 The Dream of Valentino is billed as a tango-tinged tale of seduction and scandal. This is true after a fashion, but the seducer at the heart of this opera is the magic of the early silver screen. It is in its filmmaking scenes and evocations of old-school Hollywood glamor that this production truly dazzles and enchants.

The storyline follows the rise of the real-life-dancer-turned-silent-film star Rodolfo Valentino, one of the most famous actors of his day and a beloved, if controversial, sex symbol. Although no prior knowledge of Valentino’s biography is required, many references will make more sense with a little advance reading of David Sanders’ program notes (if you have time, read Valentino’s Wikipedia article instead – it gives a better sense of the rougher edges of the man and his celebrity). This is in part because composer Dominick Argento has radically revised and shortened an opera that first premiered twenty years ago at the Kennedy Center. Much was left on the cutting room floor, but the flow of the evening is greatly improved.

The titular role in Minnesota Opera’s production is played by James Valenti, a tenor whose tall and dashing looks affably recall the real-life star. For believers in serendipity, the resemblance doesn’t stop there: Valenti’s name not only recalls Valentino, but he also had his professional debut playing another Rodolfo in Puccini’s La Bohème. This time, though, it’s not Mimi who dies young and in tragic circumstances – it is Valenti’s Rodolfo, with thousands of adoring women to mourn him. Valenti’s smoldering portrayal mesmerizes, and his chemistry with his female co-stars buoys the plot through some of the script’s shortcomings. (Much could similarly be said about the real-life Rodolfo and his films.)

Valentino’s praises are sung incessantly from the stage by June Matthis (Brenda Harris), his mentor/patron/strongly implied would-be cougar figure. Matthis may be Valentino’s number one fan, but this gets repetitive – as do the frequent assertions of the unnamed film mogul (Alan Held) that he “made” Valentino a star. Fortunately, the on-stage/on-screen magic is rivetingly compelling by itself, especially the carefully composed audition scene when Valentino wordlessly charms a room full of jaded women and men alike. Valentino/Valenti’s allure is never better demonstrated than when he literally dances off with the young actress Jean Acker (a scene-stealing delivery by soprano Angela Mortellaro) and returns to announce that they are engaged.

The staging work by Eric Simonson adds much to the visual glamor of this production; combined with Erhard Rom’s film set-based scenic design, it does much to present Valentino as a larger-than-life figure moving through shifting seas of entranced fans and the jadedly jealous. Projected images of actual movie posters, clippings from historical newspapers, and snippets of film add to the immersion – as do recreations of a few classic Valentino movie scenes. Other sublime moments include a plot-moving tango scene glimpsed only in projected silhouette (Aleutian Calabay and Ann Person are the dancers) and the diagetic music used in the filming scenes. As in silent films where gesture and posture must substitute for words, it is in these moments of economy that Argento’s score is most beautiful.