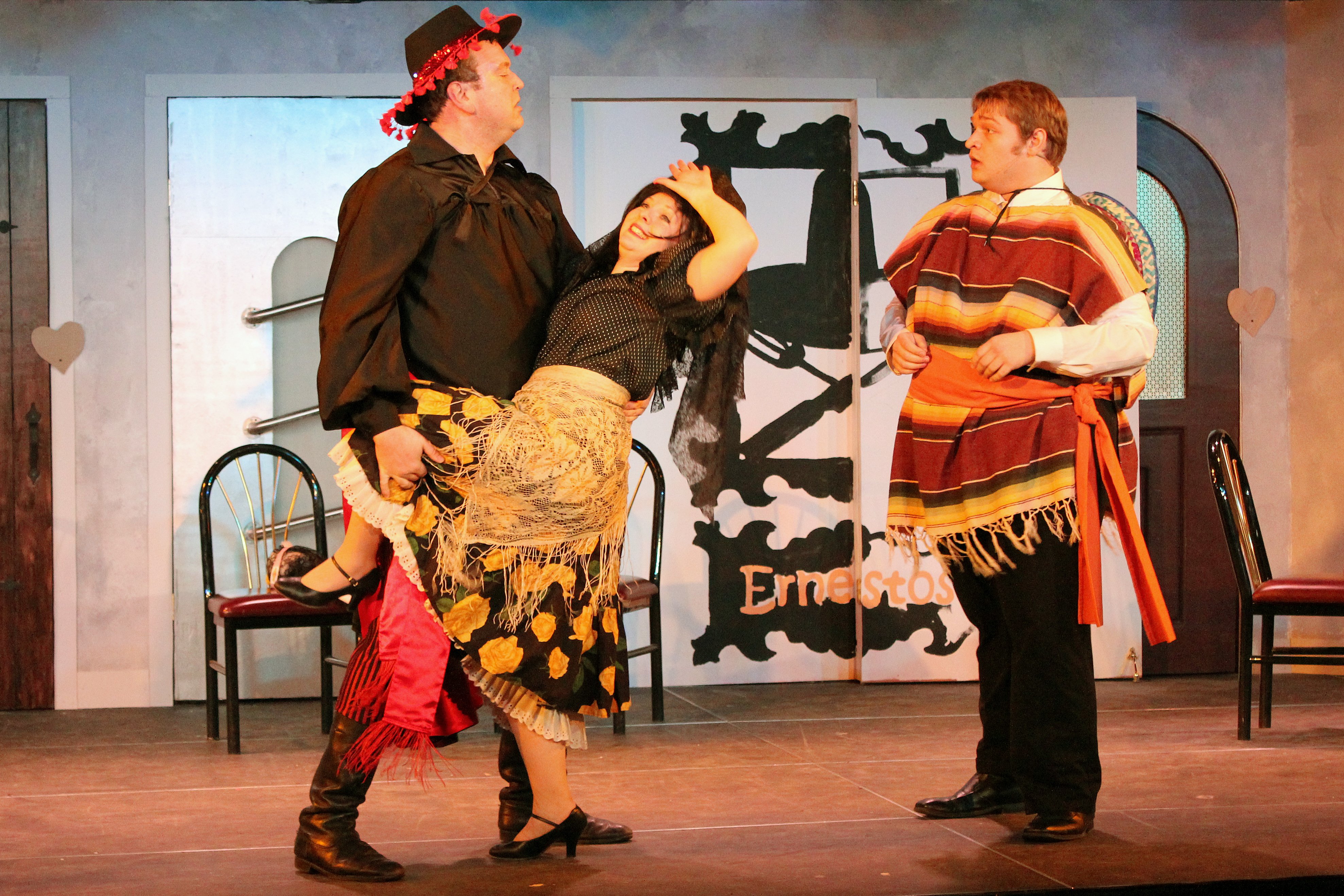 The best parts of Five Course Love are the appetizer and the dessert. The entrées in the middle are not without their virtues, but the cuts of meat are tougher and the seasoning hit-or-miss. Whether or not a musical dish is relished or ultimately sent back to the kitchen will vary based on the individual palette.

Five Course Love, presented by Minneapolis Musical Theatre at the New Century Theatre, is a series of five romantic (or would-be romantic) vignettes set in or near restaurants. Three cast members play fifteen characters over the course of the evening, with one of the pleasant surprises being the stark character metamorpheses that take place between scenes. A nervous and balding stammerer in one scene transforms into a hard-nosed mobster the next, a dominatrix into a nervous schoolgirl, and a bumbling waiter into a Zorro-like vigilante – to name just a few. Running gags are sprinkled throughout the show and many grow on the audience; sets and costumes have a fun, campy air to them.

The show proper begins with “A Very Single Man,” a hilarious song about a middle-aged man (Ryan McGuire Grimes) on his way to a blind date. It is one of the funniest and freshest songs in the score, and marks the start of a strong, sung-through chain of numbers. Upon arriving at the restaurant, the very single man is treated to a delicious and showy country western number by the waiter (Joseph Pyfferoen) and enjoys a spicy duet with his date (Amanda Weis, “Jumping the Gun”) – and then the date starts to go wrong in a rather spectacular musical fashion.

This is a strong opening and one that the score unfortunately does not always live up to. Many of the later numbers recall favorites from other shows (two bring to mind songs from Little Shop of Horrors, for example), some of which are decidedly fresher than others. A similar issue applies to the frequent sexual references and national stereotypes; at Sunday’s show, the audience seemed evenly divided in finding these offensive, humorous, tasteless, or titillating. (This is not a show to bring younger children to, by the way.) The performances were delivered with great gusto, but the musical itself has more than one type of rough patch.

Whether some of these rough patches came from the directing or the script is unclear. The high-pitched screech of Rosalinda (Amanda Weis) in the Zorro parody quickly grew old; the faux Mexican accents of her suitors would be considered quite offensive closer to our southern border. On the other hand, the courtship song “Come Be My Love” was a fun and delightful battle of one-upsmanship. The closing, though, was much less ambigious; a pleasant homage to Grease, Bye Bye Birdie, and others that swept the problems under the rug for a bang finish.