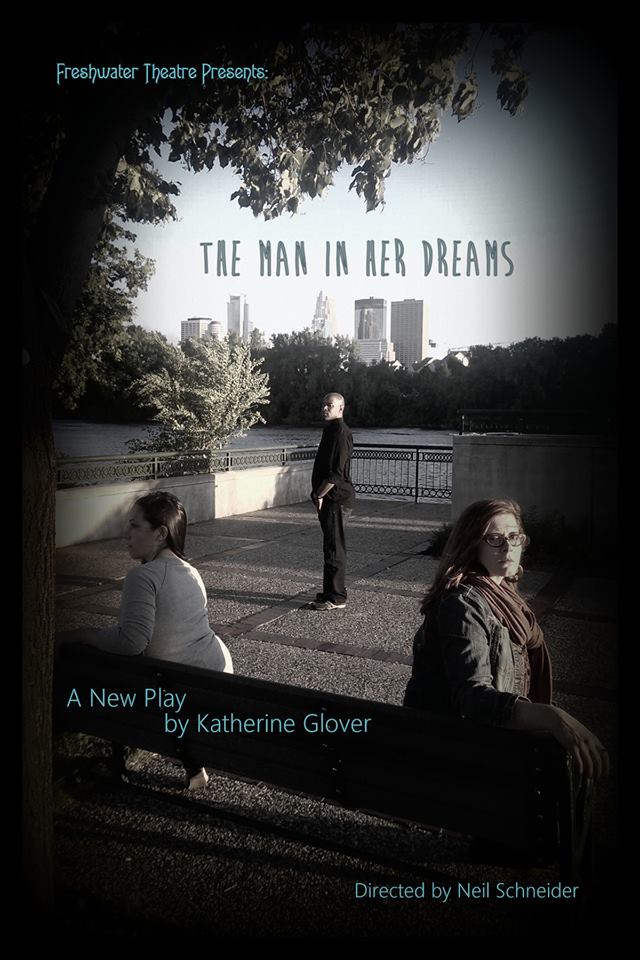 Even though I’ve been writing about theater created by people I know for a number of years now, with the Freshwater Theatre production of Katherine Glover’s new play The Man In Her Dreams I may have finally run across something with which I’m so familiar that it’s almost impossible to evaluate it objectively. In fact, I’ve already written an entirely different review that, upon re-reading, I’m scrapping in order to start over. That’s how turned around this play’s gotten me. I’m familiar with the theater company, the director, several of the actors, the playwright, the source material, and even seen parts of earlier drafts of the play worked through in a writing group of which I’m a part. Layer on top of that the fact that The Man In Her Dreams is dealing with sensitive issues of race and gender, guilt, innocence and justice, and it gets harder and harder to approach objectively as if I were an audience member who had never seen any of the material before, on the page or in performance.

“My husband’s in prison but he didn’t do it. Doesn’t everyone say that?”

The Man In Her Dreams is an ensemble drama that has its roots, both in subject matter and storyline, in Katherine Glover’s one person show, Dead Wrong. Dead Wrong was a powerful meditation on how a woman’s memory betrays her, causing her to be the reason an innocent man goes to prison. When she discovers her error, she has to fight the system she once felt was protecting her in order to get the man released. The Man In Her Dreams expands the world of this story beyond the woman who learns she’s not the reliable witness she thought she was. The Man In Her Dreams introduces us to the man she sent to prison, his wife, and his mother, and tries to give a window into the lingering impact this miscarriage of justice has on all their lives, even after the man is set free.

“Things like this aren’t supposed to happen, I know. But they do.”

Megan Shepard (Katie Starks) is the woman coping with the aftermath of her rape. She is guided through the criminal justice system by Detective Jack Lewis (Kevin McLaughlin) and an aggressive prosecutor (Gina Gomez). Her own healing doesn’t really begin until after the trial when she begins a relationship with a librarian named Izzy (Gomez again).

“Sorry has never felt like such an empty and meaningless word.”

On the other side of the case, the accused Jabari Woods (Richard “Doc” Woods) ends up saddled with a less than adequate lawyer (Elohim Pena). So his white wife Nikki (Rebecca Gebhart) and his god-fearing mother Gloria (Julia Hines) end up watching helplessly as the prosecution runs rings around the defense, and Jabari gets sent to jail for a crime he didn’t commit.

“I guess these things are never really over.”

Part of me wonders if black and white audience members view this play differently. Do white audience members trust that the system will reach a just conclusion? Do African American viewers look at this and see a system stacked against them, in which only the very best lawyer has a prayer of getting you off, even if you’re innocent? Or is that bleeding heart liberal side of me outrageously over-generalizing?

Glover has set herself a daunting task as a writer, and I admire her and Freshwater for having the guts to go for it. The production—acting, directing, design—gives the play all the support it could ever ask for. The challenge right now is that the play’s not quite there yet in its metamorphosis from one person storytelling to multi-character play. The balance still tips toward Megan having the most fully realized story (not surprisingly, her story had a big headstart in its development). Even the curtain call the night I attended reinforced this—Starks as Megan got an individual bow after the big group bow. (I’m not saying Starks isn’t doing good work. She is. She has to carry the weight of a great deal of the play and does it beautifully.) Megan is the Her, of The Man In Her Dreams (of the attack). Jabari actually isn’t that Man, even though for a long time Megan thinks he is. But if the play is really about how the system is screwing all these people, no one person should need to be singled out.

“Guess we all look alike to you, huh?”

It feels horrible to say this, but we’ve seen Megan’s story plenty of times. We’ve even seen this particular Megan’s story in a completely separate play (and a damn good one at that). The story that hasn’t seen as much daylight (or stage light) is Jabari’s story—and Nikki’s, and Gloria’s. How does a family hold itself together when one of the key people in the family is sent to jail for something they didn’t do, and society and the justice system are deaf to all entreaties for fair treatment, reconsideration, even the presumption of innocence? How does a man hold on to his sanity in prison? How does he remain connected to the people he loves and the outside world? How does his role as a father to his children suffer? How does he find his faith in God again at the lowest point in his life? How does he learn to forgive the woman who sent him to prison? How does he fight the expectations of a society that greets his release not by accepting his innocence, but only continuing to see the fact that he was once in prison?

“I feel all clenched up, like my heart’s afraid to beat.”

The story of Dead Wrong was Megan’s. The meat of the story in The Man In Her Dreams doesn’t really kick in until Jabari is sent to jail. The rest is prologue. Right now that prologue is almost the entirety of act one. The play starts too early, and then ends up short handing a lot of the struggle of the African American family. Megan’s story still holds sway over The Man In Her Dreams, and I’d argue that it shouldn’t. There’s a lot of Megan that could and probably should be shorthanded here (including the truly beautiful lesbian relationship of her and Izzy that kicks off act two, showing that Megan is no longer isolated, which I would hate to see go, but…). If the point of The Man In Her Dreams is to unpack the miscarriage of justice of sending an innocent man to jail, and the role that cross-racial misidentification plays in many of those cases, then I’m more interested in seeing Megan’s white privilege dissected. I’m more interested in seeing the racial bias in the legal system laid bare. I’m more interested in seeing how a man’s, and a family’s, soul rises to the test of such a horrible mistake, and where the breaking points come. I’m extremely interested to hear more about the work of groups like the Minnesota Innocence Project, and programs that help people, rightly or wrongly convicted, reintegrate into society.

“Tips are better on Saturdays. Avoiding your mother’s just an added bonus.”

There is a fascinating scene that, even as I’m arguing for it and much of the first act to be reworked, was an exciting glimpse into the potential of the script, the writer and this production around the notion of exploring white privilege and racial bias in the criminal justice system. The detective comes to Jabari’s home because it’s near the park where Megan was attacked, and because Jabari had some run-ins with the law when he was younger. Now, having faced the alcohol problem of his youth, Jabari has built a life, gotten married, started a family. He even has an alibi for the night in question. Jabari’s white wife Nikki bristles at what she perceives to be the detective racially profiling her husband. Jabari himself is nothing but deferential and polite to the detective. When the detective leaves—after Nikki makes a point that he is no longer welcome in her home—Jabari essentially asks his wife, “Why were you confronting the police officer? Were you trying to get him to shoot me?” Nikki sees police harassment as something you push back against. Jabari sees all encounters with the police as something you just try to get out of alive. As much as some of white society is scared of black men, black society seems equally worried about setting off anyone with a uniform, a badge and a gun. That seemingly simple exchange is enormously weighted with the entire troubled history of our country. Material like that in The Man In Her Dreams, allowed room to breathe, would make for a very complex, moving, powerful and important play. It’s a play this writer and this theater are capable of nurturing.

“He says he’s innocent. He has to admit he did it to be eligible for parole.”

Once you wrong a person, you can’t unring that bell—but there may be things you can do to atone. How does Megan, how does the justice system, how does society, atone for the wrong done to Jabari Woods, who should never have been The Man In Her Dreams? Dead Wrong was all about the question of “how did it happen?” The Man In Her Dreams seems to be trying to answer the question of “after it happened, now what?” It needs to take a little more time exploring that. Freshwater’s production is a good start. I look forward to seeing more of this play’s good intentions fully realized in the future.