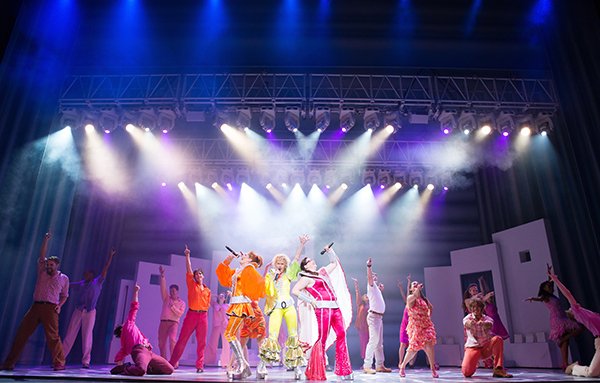 Theater is a varied menu. Some days, the appetite demands a serious drama; other nights, perhaps a comedy. A palette that normally prefers logical, well-constructed stories with excellent dialogue does not exclude enjoying the theatrical equivalent of angel food cake heaped with frosting. Cake and frosting mixed with ABBA more or less sums up Mamma Mia!, now playing at the Orpheum Theatre – and that’s not a bad thing here.

The typical Broadway musical circa 1914 was a random grab bag of songs, stitched together by paper-thin dialogue, jokes, and slapstick; it was not for nothing that “comedian” was the normal term for a leading actor. One came mostly to hear pretty music, hear jokes, and see some fancy sets and scantily clad chorus girls dancing (sorry, ladies). So long as you didn’t mind plot holes that you could drive a truck through, it was a fine time – at least until pieces like Show Boat came along and showed what a tightly written script and songs that actually tied into the plot had to offer. A century later, Mamma Mia! reminds us that having a good time is still a perfectly wonderful reason to head out to the theatre.

The musical’s plot is not worth mentioning, not least because the plot holes are as numerous as the potholes on Hennepin. The show is at its best when it doesn’t take itself too seriously and embraces what it is – an ABBA tribute jukebox of a musical, with pretty songs, a liberal helping of jokes and double entendres, and a lot of dancing. (The set was surprisingly undistinguished for a touring Broadway production, but on the flip side the women in the audience get more scantily clad chorus men.) Act I starts off slowly, mostly because of a misguided effort to shoehorn songs into servicing the plot, but halfway through it picks up steam when the rhinestone-studded costumes finally come out.

The show runs almost three hours with intermission, but does not feel long. “Less talk and more rock” is the order of the day, and ABBA’s long list of hits means that there’re plenty of songs to get through. Here, the musical adaptation is sometimes too slavish: songs are presented in their original keys (to maximize singalong potential?), leading to some vocal range problems when songs are gender-reassigned to men. Returning audiences who caught last year’s run should know that the choreography has been significantly updated and promises something new; like the music, the last three quarters are much better than the first.

Perhaps the best takeaway from Mamma Mia! is the profusion of smiles in the packed house on Tuesday night. The script is no Shakespeare and the whole package is about as far from Oklahoma! as you can get, but boy is it fun to watch when things really get started – snorkel & fins ballet, rhinestones, and all.

A word to the wise: when the show seems to reach its nominal ending, don’t run for the nearest ramp yet: There’s a full-on mini-concert left that should not be missed.