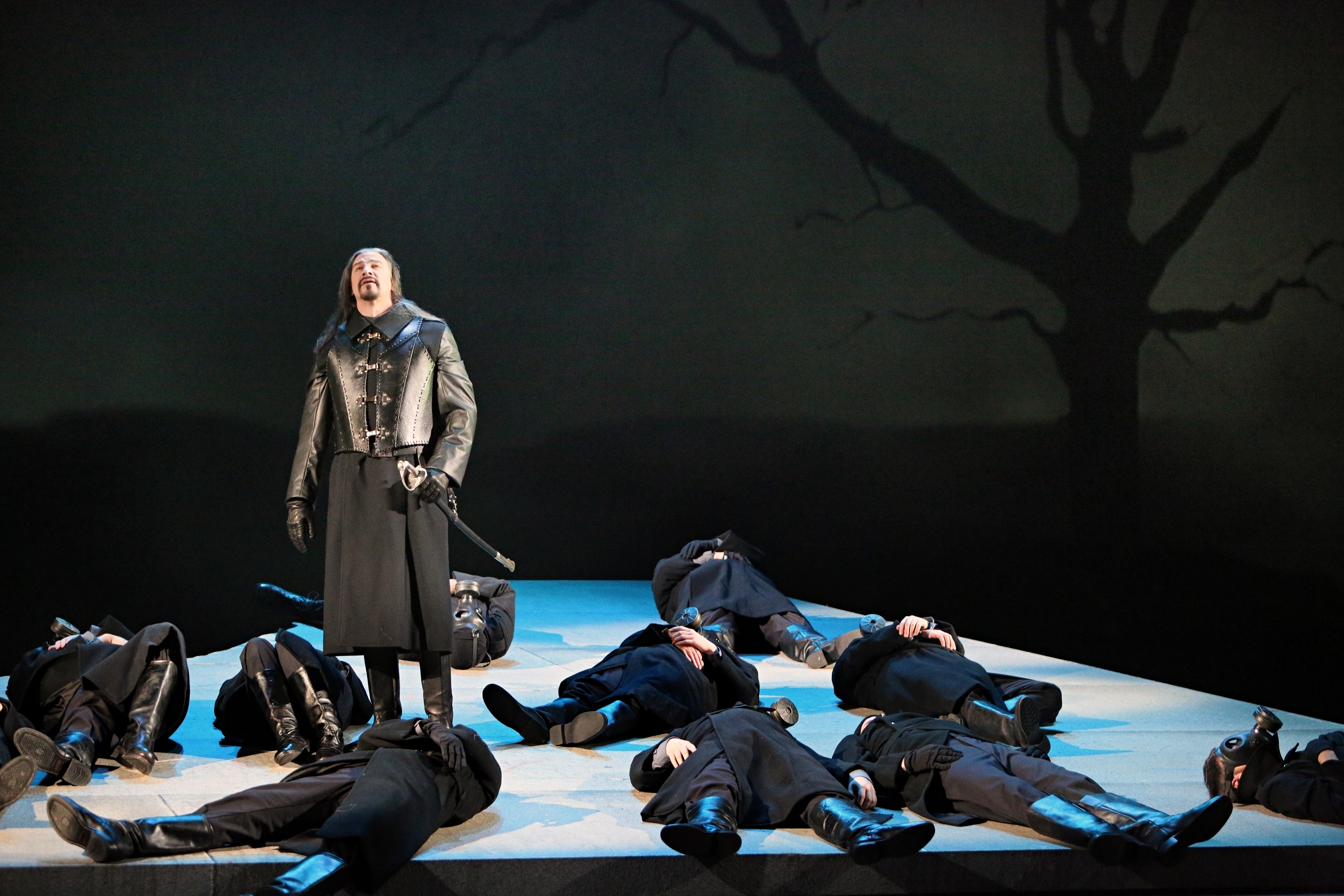 Macbeth is not a story of happiness. Success begets greed, violence escalates, and blood once shed demands more and more, even as guilt devours. All of these are greatly heightened in Verdi’s operatic adaptation of the classic Shakespeare play, currently presented by Minnesota Opera at the Ordway Center for the Performing Arts.

There is no comedy and little mirth in this presentation; in their place, Macbeth and Lady Macbeth loom larger than even the Bard of Stratford upon Avon crafted them. The plot is telescoped, the cast of featured parts trimmed, and the number of witches greatly multiplied. Fog, black magic, pools of blood, and ghosts (inner and outer) spill across the stage in profusion. Lady Macbeth’s ruthlessness is terrifying, the character truly unlikable – and the sterling delivery by Brenda Harris much applauded. She eggs her husband (Greer Grimsley) on at every turn, berating him for his ghosts and gnawing guilt; the only weakness we see is from her unconscious, sleepwalking self.

Although the bloody couple holds center stage for much of the opera, their fellow principals carry a great burden in moving the plot forward. Banquo was so well played by Alfred Walker that it seemed a shame that his character died so early; had Verdi been revising the work today, Walker would have received another aria. Shannon Pricket and Christian Zaremba’s shared interlude during the sleepwalking scene was brief but very memorable; Harold Meers’s turn as Macduff was weighed down only by not having so memorable music to sing.

Macbeth demands powerful stagecraft to match its prophecies, sorcery, and foreshadowing; of this particular delivery, many good things can be said. Brutalism as an architectural movement has many drawbacks, but as the design aesthetic for Macbeth’s castle (and, by extension, his bloody reign of terror) it is highly appropriate. The decision to unveil the castle set in its full, stark coldness as the backdrop for Banquo’s murder was inspired. Facial expressions were often hard to make out in dimly lit scenes (especially near the front of the stage), but Jason Hand’s mood lighting cues added excellent foreshadowing at key moments – especially the letter scene when Lady Macbeth further resolves to kill King Duncan. The witches’ sabbath in Act III was masterfully done, full of eye-catching, spewing cauldrons and lighting flashes during the conjuring.

Some other aspects merit criticism. Macbeth’s first reaction to stumbling across several dozen witches is far too blasé; the choreography of Banquo’s assassination is simply odd, as he is praised as Scotland’s greatest warrior but seems to suddenly offer himself up to the assassins’ swords. (His son’s escape also seems rather unlikely, given this and the very large number of assassins placed closely onstage.) The flow of dialogue across the supertitles was also sometimes problematic; it rather deflates the dynamic back-and-forth of a musical conversation when the answer is projected next to the question before either is voiced.

These nitpicks aside, this production of Macbeth shines. Greer Grimsley’s journey as the eponymous tyrant is just as riveting as Evita across the river at the Orpheum Theatre – and waiting for Macbeth to get his comeuppance is part of the fun.