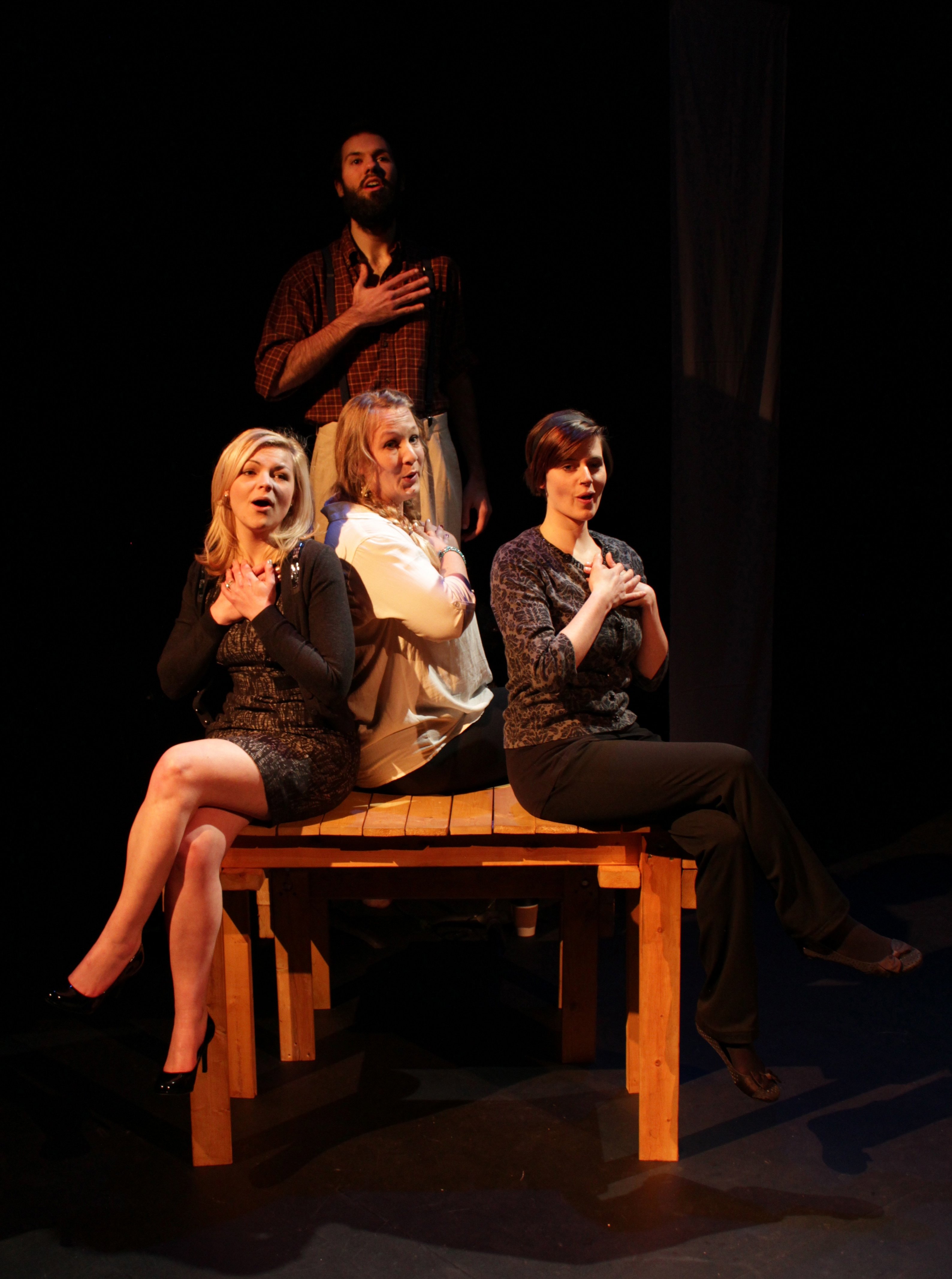 It was sprawling and strange and a little bit messy but I really enjoyed Savage Umbrella’s first attempt at staging Leaves in 2010. At the same time, it drove some of my fellow writers and theatergoers nuts. We had a very lively discussion about it.

“I know I’ve been asking you for this but now that you’ve said yes, I’m scared.”

The 2013 version of Leaves is more concentrated and more polished. Where the first outing was more of a play with music, the current Leaves more fully embraces the identity of a piece of musical theater (there are 11 songs and a reprise, all dutifully listed in the program). This new Leaves also puts Walt Whitman and his words front and center in a way the previous version flirted with but didn’t completely commit to. Leaves seems to have decided what it wants to be when it grows up. Do I love it just as much as I did when it was a kid?

“That sweet little story you’ve woven might be falling apart.”

We gather in the small town of Springfield for the burial of Abe, a man who raised his two grandchildren Sam (Paul Rutledge) and Mabel (Hannah K. Holman) to adulthood. Sam went to war in Afghanistan and is finding readjustment to civilian life difficult, particularly since he can’t find a job. The death of his father figure isn’t helping. Sam’s wife Ashley (Heidi Jedlicka Halvarson) is trying to hold things together—supporting Sam emotionally, being the breadwinner, and raising their own two children. Ashley has dreams of her own, however. Her band might be going somewhere, if she could commit to it. But Sam resents her time away as it is. Something’s gotta give.

“There’s this heightened awareness like a deer during hunting season.”

Meanwhile Mabel is feeling even more lost than her brother. She loves her job baking and serving at the local diner, but the world’s a big place. Is there something else for her? Might it be Bek (Laura Leffler-McCabe), a freelance journalist passing through town, looking for the identity of queer America outside the big cities? The upheaval in Mabel’s life causes her to be open to radical decisions she never considered before.

“O harsh surrounding cloud that will not free my soul.”

Weaving in an out of all this is a drifter named Whit (Russ Dugger). His presence seems benign enough, but just by being present as a mirror in which the other characters can see themselves, he sets things loose that might otherwise have remained dormant.

The words of Walt Whitman are both a blessing and a curse in Leaves. Whitman provides a strong foundation on which to build and grow the story. But poetry and song lyrics are not necessarily the same thing. A composer friend of mine is fond of saying that you need fewer words for song lyrics because the words don’t have to do all the work by themselves. The music adds something the words alone couldn’t accomplish. So the words in some sense need to make room for the music. Whitman’s poetry is many things, but one would never call it sparse. If anything, Whitman is full to bursting with words and a muscular style. Whitman’s words are ideal for reading and speaking—and the character of Whit does a lot of the latter in Leaves. Singing is another matter.

“Today at the funeral all I wanted to do was hold your hand.”

Savage Umbrella makes the choice to not try and constrain Whitman’s poetry or alter it in any radical way. Leaves, both the plot and the music, is shaped around Whitman’s words. In a weird way, Whitman is confining the play and the songs rather than the other way around. This is most true of the music. Whitman’s poetry almost refuses a standard melody line or any repetition. The music here follows the ebb and flow of the words of Whitman’s poems. While this does make them all sound like they’re coming from the same songbook, it also makes them tough to sing. The cast here all have lovely voices, and there are moments throughout the play when they blend to great effect. But often because they’re cranking out so many words, they don’t have a legitimate chance to catch their breath. Everyone keeps the songs moving along, but in riding the back of these unruly melodies it’s all they can do just to hang on. None of the songs really allow these performers‘ voices to soar. They have to stay latched onto the music tightly for it to work. They can’t be allowed to deviate. So I found myself resenting Whitman just a little for keeping these actors’ voices in a bottle. Which is strange, since Whitman normally seems all about setting people free to be more fully themselves.

“I confess the world is full of funny people.”

The plot, which used to be all over the place in a big sloppy way, now seems tamped down as well. But I’m not sure it makes more sense. If my fading memory of the previous Leaves isn’t failing me, the former Bek used to be one of Abe’s students, so she had a reason for coming to town for the funeral. In this go-round, she just shows up by chance, which seems a little too “Plot Convenience Playhouse,” particularly since we already have one transformational drifter passing through town in the form of Whit.

“How lucky it is to be born. It’s just so unexpected.”

Also, while Ashley’s dreams of a music career certainly make her ideal fodder for a musical theater piece, we don’t get to invest in that side of her soon enough. She and Sam talk about it, a lot. But we don’t see her in action with her band until Act 2, which I think is too late. If anything, I’d argue for her kicking us off right up front. She should be winning us over before Sam has a chance to be a wet blanket on the idea. “But Sam,” we should be thinking, “you should hear this gal sing!” Instead, it just seems like some housewife’s pipe dream, when it should be all hands on deck right now trying to get her military vet husband reacclimated to life in small town America.

“We have somewhere surely lived a life of joy together.”

Not that there’s anything wrong with displays of fluid sexuality either, but I get the uncomfortable feeling with Mabel and Bek’s plot line, and the way in which it intersects in intriguing ways with Whit, that the (unintended, accidental) message the play is sending is, “See? Being gay or bisexual is a choice!  Go, lesbians!” If we really are seeing Mabel’s awakening to another side of herself, it needs a little more room to breathe. Right now, the audience wants to sit poor Mabel down and say, “Honey, maybe right after your grandpa died isn’t the best time to be making any big life decisions.” On the other hand, if death staring you in the face doesn’t make your reevaluate your life and think, “What am I waiting for?” then what will?

“Give me the time beyond my dreams. I’ll prove how lucky we are.”

In a weird way, even though they have more time in this version to tell the story, and fewer plot lines to juggle, Leaves’ plotting still feels a little rushed. You could spend all your time with Sam and Ashley with a dash of Whit, or all your time with Mabel and Bek and a dash of Whit, and you’d have yourself a full play. These are rich characters, in the hands of very capable actors (who can also sing!) Leaves hasn’t tapped their full potential yet.

“He said the kindest weirdest things.”

That said, leaving the audience wanting more rather than less of something is a good thing. I wasn’t frustrated by Leaves so much as I was full of questions. The decision to focus more fully on the source material of Whitman is a good choice. It gives the play its personality and its voice. It makes it feel uniquely American somehow. I have a hard time defining it, but Whitman’s poetry is what a certain slice of America feels like to me. The fact that Whitman’s identity is all tied up with both war and queerness provides some delightful tension and complexity. But right now, with two plot strands each with its own very full plate of things to explore, Whitman feels like he’s crowding them just a little. There might legitimately be two full musicals in here about mourning and redefining your life struggling to get out. The end of one era or phase of life for the characters, and the beginning of another. The end of one stage of a play’s evolution, and the beginning of another (or two).