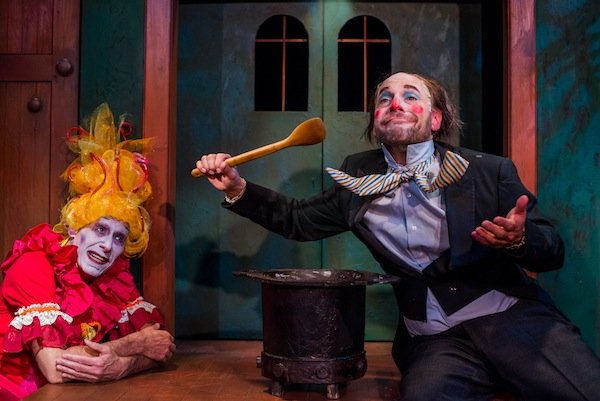 Photo by Mark Vancleave. Julian McFaul as the Father, Robert Rosen as the Stepmother.

In The Juniper Tree, Open Eye Figure Theatre delves into the dark and twisted minds of the Brothers Grimm, recreating a charming children’s story full of murder and cannibalism. Even with the gruesome bits, you’re probably okay to take the kids—hopefully they won’t be scarred for life after watching the black pudding scene.

As fans of Open Eye might expect, the show boasts a spectacular visual appeal, with a cast of incredibly expressive marionettes puppeteered by Liz Schachterle, Justin Spooner and Tara Loeper. Michael Sommers, who adapted, directed and acted as Production Designer for the show has created a dark and shadowy world where hopes and dreams loom over the characters through the branches of a magical Juniper Tree, whose ghostlike movements provide some of the most enchanting moments in the show. In fact the brightest colors and most of the show’s comedy, come from the evil stepmother, Madame Traum, played with bursting energy by Robert Rosen.

The design contains wonderful twists and turns in perspective, with the aid of the puppets to change the size of the characters, but also sometimes shifting planes so that we can watch The Father, played by Julian McFaul and The Mother, played by Liz Schachterle in bed as the actors are standing up, for example.

There’s also a wonderful score composed by Michael Koerner and a live band that will have you singing some of the songs after the show.

I enjoyed the production, but I did have a gnawing unease about the misogyny of the original story. The evil stepmother trope, so prevalent in the Grimm’s fairy tales and indeed much of Western folklore, gets really tiresome for a feminist to sit through. Maybe that’s why there’s been such a movement lately to make these stories more palatable by turning them around, showing the stepmother/witch/evil sorceress from a different perspective. Think Into the Woods, which gives the perspective of the Witch, or even Frozen, which gets rid of the Snow Queen altogether in favor of a story that focuses on two sisters. There’s also Maleficent, starring Angelina Jolie, who portrays the witch in Sleeping Beauty as a kind but misunderstood fairy.

I’m not saying Open Eye should necessarily have changed the original story to appease the sexism phobic among the audience, but it was something I was acutely aware of throughout the play.

At first I wasn’t sure how I felt about the cross casting of Madame Traum. I just don’t find men dressing up as women inherently hilarious, especially if it’s not within the context of a specifically lgbt or queer performance. And given my reservations about the anti-woman sentiment of the Grimm’s story, I had to warm up to the idea of the convention, because I was worried it would lend itself too much toward caricature.

But Rosen is funny in the role—for other reasons than his cross-dressing. His performance is so infectious, it became impossible for me not to delight in his silliness. His jolly wicked stepmother took extreme joy in her evil ways, so much so that even in her ultimate act of horror–snapping off the head of her stepson, it read more like an accident than a deliberate choice. Plus, Rosen offered a lovely three-dimensionality to the performance, illustrating moments of yearning and of regret.

In the end, Sommers adaptation of the story becomes less about how horrible stepmothers can be and more about the power of hope and dreams. That’s a message I can get behind.