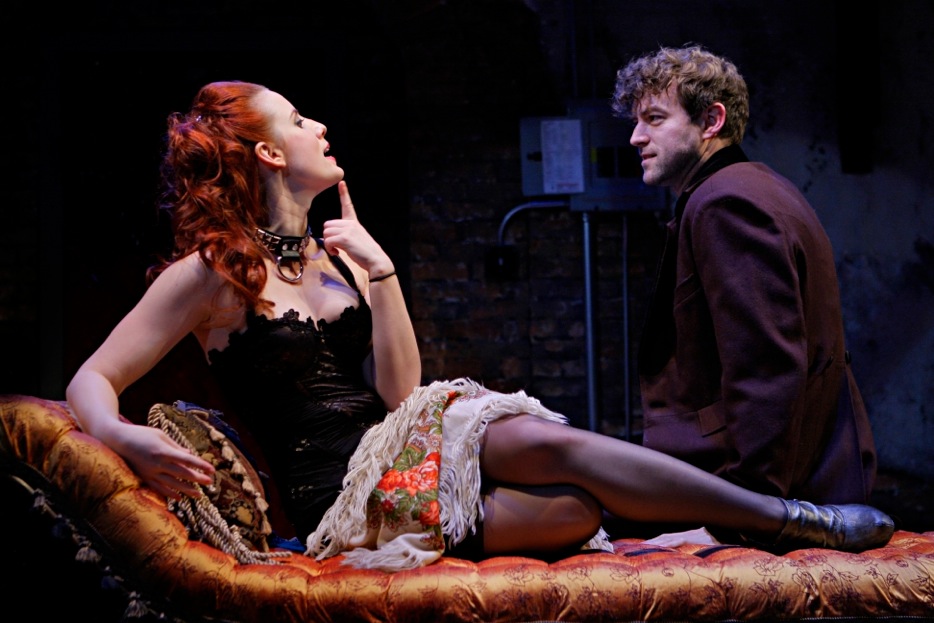 I was standing in the lobby of the Jungle Theater on February 1, wondering how I was going to summarize my reaction to Venus in Fur, when Bain Boehlke—the theater’s artistic director—approached me with a microphone, a cameraman shooting over his shoulder. I struggled to finish the massive shrimp in my mouth in time to answer Boehlke’s questions, all of which I answered honestly but…diplomatically. Finally, Boehlke asked what I thought of the ending, whether I was surprised. I said something noncommittal, which Boehlke managed to summarize succinctly. “It didn’t turn you around,” he said, “because you weren’t sure where you had been led.” I nodded. Yes, that was it.

David Ives’s 2010 play contains many reversals, so some confusion—on the part of both the characters and the audience—is by design. Director Joel Sass’s Jungle production, though, leaves the audience in a form of confusion that fades into indifference. These characters are so mercurial and unsympathetic that, by the play’s would-be shocking conclusion, we just don’t care who’s holding the chain and who’s wearing the collar.

There are only two characters in the play—though each of those characters plays two different characters in the Venus in Fur within this Venus in Fur, so you get six for the price of two. Fortunately, the two actors are both very fine (in both senses of the word): Peter Christian Hansen and Anna Sundberg. Hansen’s Thomas is a playwright looking to cast a female lead in his play, an adaptation of Leopold von Sacher-Masoch’s 1870 novel Venus in Furs—a classic text in the history of S&M. Sundberg’s Vanda, whose name is conveniently similar to that of the heroine of Thomas’s play, shows up late for an audition and Thomas agrees to read a few pages with her.

Both actors are very adept, and undeniably well-cast. There’s a lot of meat in the script, which has earned ecstatic praise on Broadway. Where this production slips its gears is in the tone of the show, which slides all over the map both when it should and when it shouldn’t. Both actors start out playing very broad and comic, which is clearly meant to contrast with their later seriousness and (relative) subtlety but that also means we don’t develop a meaningful relationship with either character—so by the time Hansen and Sundberg are trying to get us to care, the die has been cast.

The curtain call is accompanied by Florence and the Machine’s “Kiss with a Fist,” a song that makes a physically abusive relationship seem dangerously sexy and exciting. The selection of that song seems to confirm that’s, indeed, what Sass and his team were going for here. Unfortunately, little about this Venus feels dangerous, sexy, or exciting.