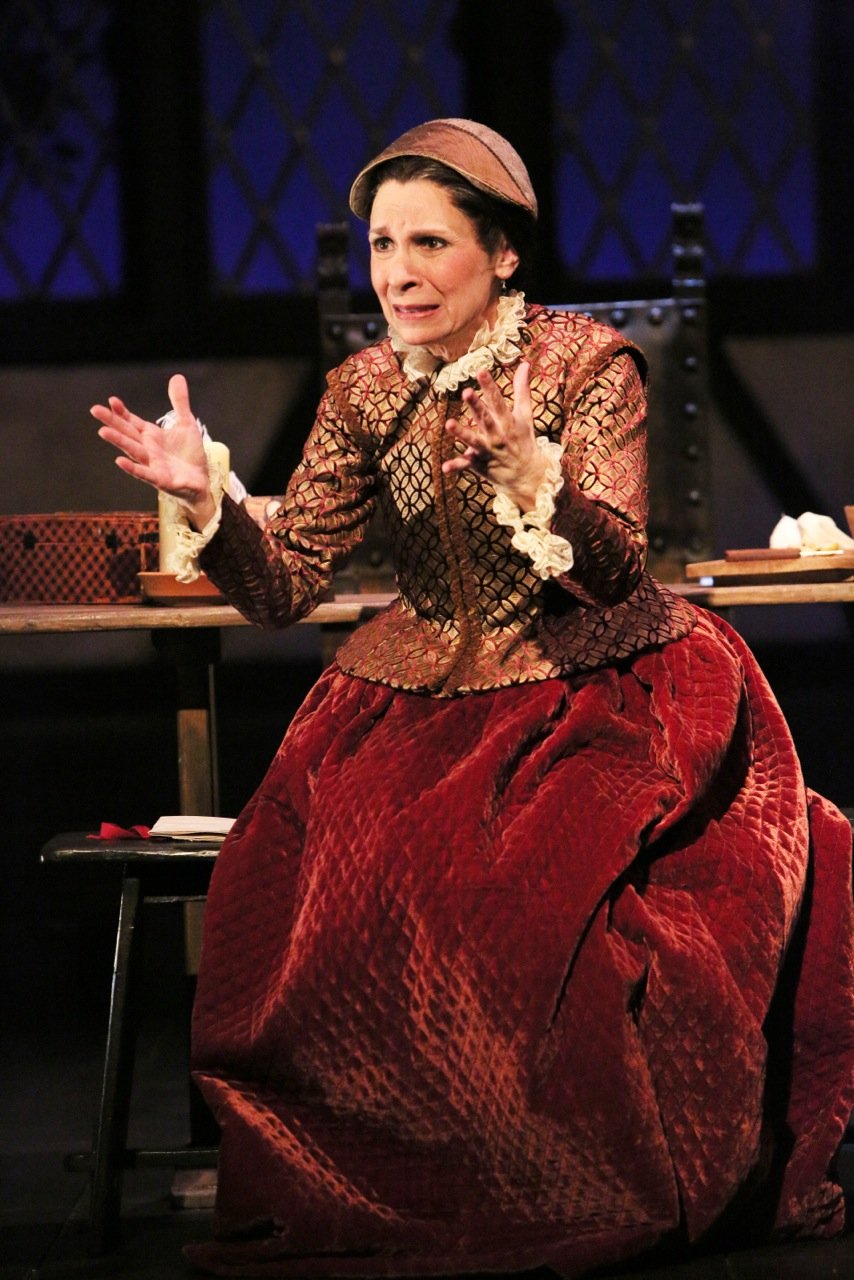 The name Anne Hathaway tends to recall a certain contemporary actress. Amongst Shakespeare scholars, however, the name is instantly recognized as that of the Bard of Stratford-upon-Avon’s wife – a figure who remains something of a mystery woman despite centuries of investigation. Anne was eight years older than her husband, lived most of her married life apart from him while Shakespeare pursued his career in London, and was strangely slighted in his will. The play Shakespeare’s Will, now playing at the Jungle Theater, is an entertaining and sardonic look at the couple’s marriage.

The play itself is a one-woman show, with Cathleen Fuller as the Bard’s long-suffering wife. The setting is simple: a room in her house the night after his funeral, his last will and testament still unread. Much of the pull comes from foreshadowing; attendees – even Shakespeare afficianados – are advised to brush up their Shakespeare(an history) by reading the program notes beforehand, as many of the jokes and references will resonate more and give the titular plot turn that much more gravitas. This is an intimate reminiscence on the couple’s marriage, an episodic tale that frequently commands attention. Atmosphere is provided primarily through Fuller’s impressive delivery and an excellent soundscape by C. Andrew Mayer, although perhaps the coordination of sound effects to memory was a little too predictable. Given how many times it was referenced, one could have stood to hear the sea mentioned at least once without the sound of the waves obligingly rolling in. The connection between movement and action was not always apparent, perhaps because of the particularly sparse furnishings in the one-room set.

There are many monologues in this show, but interwoven are snippets of letters and remembered dialogue, often delivered with a laconic humor whose novelty does not wear down. The exchanges between Hathaway and Shakespeare are particularly funny, and seemed especially enjoyed by the couples in the audience. The most riveting parts, however, are the gripping accounts of fever and plague sweeping through town – dark journeys of fear and horror that counterbalance the wry reminiscences. Fuller shines here, setting a high bar that only the climactic monologue exceeds.

As the playwright’s notes hasten to point out, Shakespeare’s Will does not claim to be historically accurate; among other things, we simply know too little about Anne Hathaway and about Shakespeare for such a reconstruction. As a piece of historical fiction, it is is engaging, humorous, and makes great use of quotation and reference. Cathleen Fuller’s portrayal of Anne Hathway is engrossing.