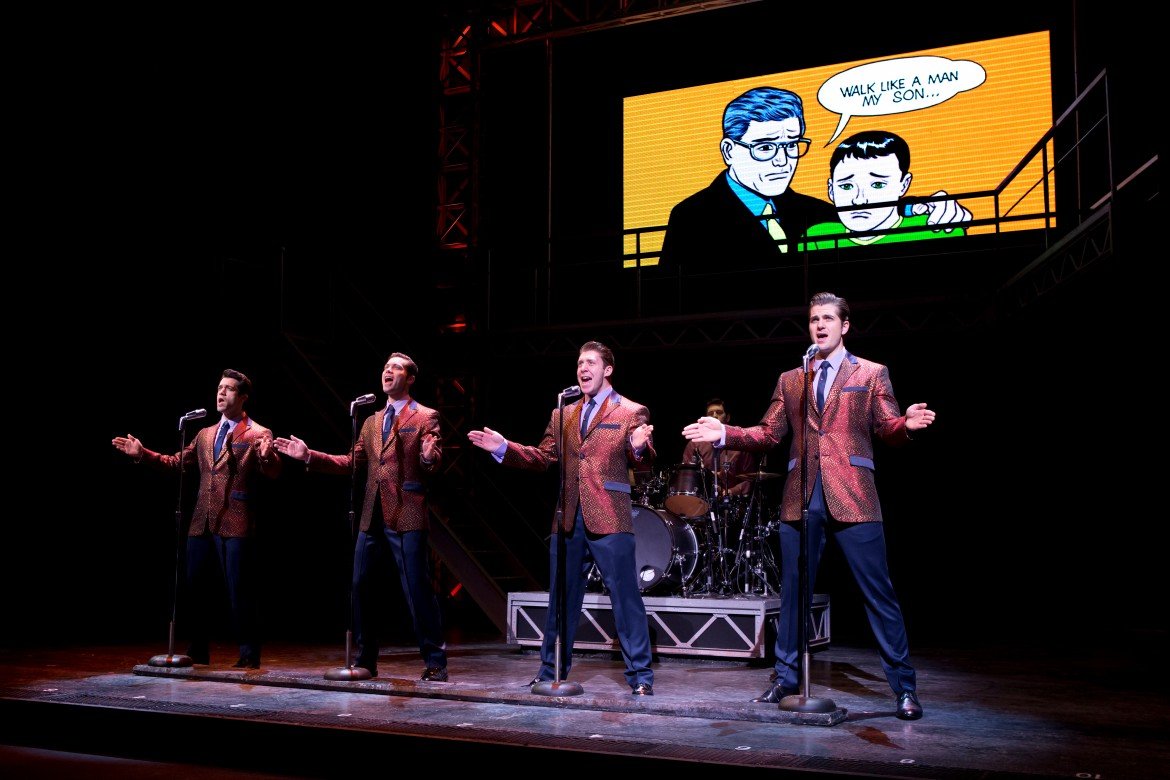 November 6 of this year will mark the 10th anniversary of Jersey Boys’ opening on Broadway. For a show that starts with “Oh, what a night!” this means an awful lot of nights of rocking the charts 60s-style. So what does it mean when this show tour – still running after nine years on the road – touches down on Hennepin Ave? Is the magic still there?

The answer to the second question is, “Yes.” The answer to the first is, “If you haven’t seen it already, buy your tickets for a ride on an amazing musical rollercoaster.” The show production is a tightly paced, comedic yet affectingly serious journey through a profoundly varied song catalog of hits. It is a jukebox musical, but a jukebox musical par excellence that puts many original shows to shame with the intricately arranged score. It’s also one of the best putting-the-band-together shows of recent decades, well-sung, and well-delivered.

Great credit goes to the book writers Marshall Brickman (one of Woody Allen’s collaborators) and Rick Elice (book writer for the excellent Peter and the Starcatcher, which visited last year). This is a script that sparkles with memorable dialogue and pushes the boundaries of what seems logistically doable onstage. Several of the company members play a dozen or more distinct parts, flying on and offstage in completely different costumes and hairpieces, anchoring the sorts of visual and musical montages normally restricted to a much, much larger cast or the cinema screen. No song sounds and no scene looks alike, yielding a great depth of variety that still knits into a cohesive and compelling whole.

The four main stars are, as you might expect, the titular Jersey Boys – the four young men who eventually united into The Four Seasons, one of the most successful acts in pop music history. (Sorry, ladies, the spotlight’s fixed on the boys.) This quartet is excellently played by Matthew Dailey (Tommy DeVito), Keith Hines (Nick Massi), Hayden Milanes (Frankie Valli), and Drew Seeley (Bob Gaudio), in a balanced feat of writing and acting portrayals that keeps anyone (Ringo Starr jokes aside, and there’s a good one) from receding into the background, even when little is said. Milanes and Seeley are gifted with the most featured vocal material, at which both excel. Some memorable supporting performances are turned in by Jaycie Dotin, De’lon Grant, and Thomas Fiscella, among others.

The hard slog to success and the struggle to retain that success are some of the most compelling parts of the storyline. When Milanes/Valli and Seeley/Gaudio discuss their frustrations in trying to craft a new sound, or how much they’d like to be able to afford a horn section, it is much more engaging than a typical making-the-record film. Hearing the musical elements put together one by one, slowly turning a fragment of song into an exquisite thing, is a wonderful journey – and when that hoped for horn section finally does appear, it’s impossible to forget. The look and feel of their tightly choreographed acts is hard to forget, too, and makes one want to harken back to a different era of concerts.