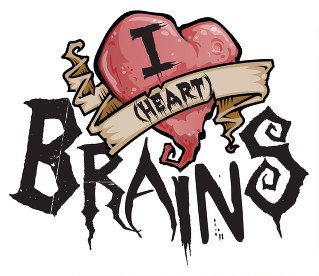 The musical I (Heart) Brains, which just finished its run on June 28 at the Historic Mounds Theatre, is the latest entry in the current zombie pop-culture renaissance. The show is based on a simple premise: What would you do if you discovered that your significant other was a zombie, and had been for the entire breadth of your heretofore-happy relationship? If this premise strikes you as a great setup and campy Youtube videos are your thing, I (Heart) Brains would ♥ to know you better. If either are lost on you, run like the living dead are after you.

The concept of a warm-blood-zombie romance is not new–Goodreads.com lists 114 books, and the basic theme got a big screen treatment last year with Warm Bodies. Zombies themselves have taken the small stage in the Twin Cities in several productions this past season, and there’s at least one zombie-themed show heading for the Minnesota Fringe Festival. So what, besides a love of cranial matter, does I (Heart) Brains bring to the table?

Some caveats: This is a community theater production, and the freshman musical theater outing for the writing team. The work is rough-hewn in its execution and the staging bare-boned, but the audience that filled the house didn’t seem to mind that most of the flesh of theatrical trappings had been gnawed off. Camp and situational humor are the real draws, not individual qualities of the performance or staging. The script, a joint effort by four writers, has some very good ideas with a rougher execution; after the living dead have had their way with it in this run, some trimming and polishing could yield an excellent Fringe concept show down the road. The score, by College of Saint Benedict and Saint John’s University graduate John Clintsman, would also benefit from cutting away some of the fat and fine-tuning the dramatic pacing. The use of sound amplification was often more visible than audible; more attention to this could significantly improve the energy of the musical.

The show’s program doesn’t include a listing of the songs, which is unfortunate because this is exactly the sort of event where one likes to say something like, “I really enjoyed ‘Attack of the Zombie Ex-Boyfriend’” afterwards. That song, not incidentally, is one of the show’s best and campiest exemplars, and served with gusto and an acid rock twist by Adam Peterson as the titular ex. If you think that learning your girlfriend’s a zombie (“Have You Ever Noticed?”) makes things awkward, just wait until you try and apologize for your friends trying to (re-)kill her (“Guts”). Ridiculousness is the way of the game, and that’s not so bad–if you’re into zombies and that sort of thing.