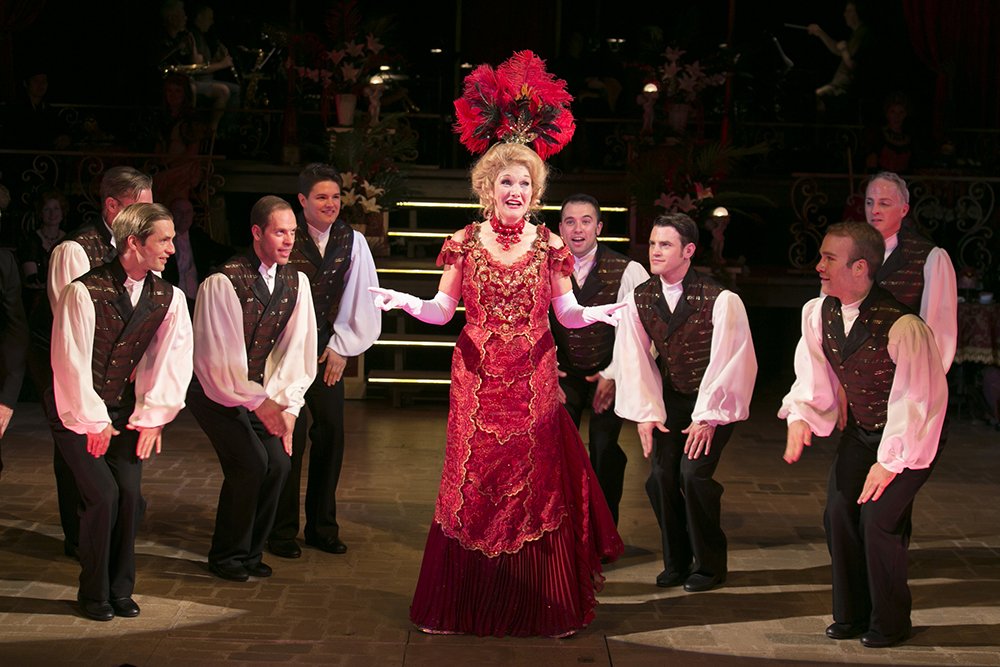 Chanhassen Dinner Theatres has been under new ownership for three and a half years, now, and the artistic team seems to have settled into a strong groove. Spring and summer see a contemporary work gracing the main stage, while autumn and winter see something out of the cabinet of classic repertoire. Hello, Dolly!, which opened on Saturday, September 12, is one of the latter blasts from the past. This is a show with bright fall colors and flavors that are predominately light, refreshing, and a little sweet; it’s more apfelwein than heavy beer and bratwurst – not that there’s anything wrong with that.

This is Hello, Dolly!’s third appearance at Chanhassen, with prior productions in 1982 and 1992. (2002 was a My Fair Lady/Music Man/Camelot affair.) Its star is nominally Michelle Barber as the titular Dolly Levi, a fast-talking matchmaker set on pairing herself off with one of her clients. Barber is commanding and Dolly’s lines are a hoot, but her costars give her a run for the money with their own scene-stealing performances. Cat Brindisi is arresting and magnetic as the businesswoman Irene Molloy, pursued alternately by Horace Vandergelder (the object of Dolly’s affection, played by Keith Rice) and Cornelius Hackl (Tyler Michaels). All of these characters are gifted with memorable dialogue and excellently brought to life.

Lively and witty is the name of the game here, and both the dancing and the singing measure up elegantly. Before the first scene is over, Dolly/Barber sets things a-thrumming with “I Put My Hand In”–the first of many excellent hits loaded into Jerry Herman’s score. If there’s anything wrong with the music, it’s that the first act is loaded with hit after hit (“It Takes a Woman,” “Put On Your Sunday Clothes” and “Ribbons Down My Back” amongst others), while Act II builds up to just one, the titular “Hello, Dolly”–but the extended “Waiters’ Gallop” dance sequence more than makes up for it. Tamara Kangas Erickson’s choreography is a notable feature of the production, and the costumes by Rich Hamson look amazing as they twirl by close-up. (Theatergoers who caught Little Mermaid will be extra amused to see Tyler Michaels having his own trembling-legged “learning to dance” number.)

Hello, Dolly! is not a show that deals with particularly weighty issues, although it’s far from saccharine. What it is is an excellent escapist comedy with sterling performances, catchy songs, and witty dialogue that makes you yearn for the old days–and enough lively dancing to vicariously burn off your meal.