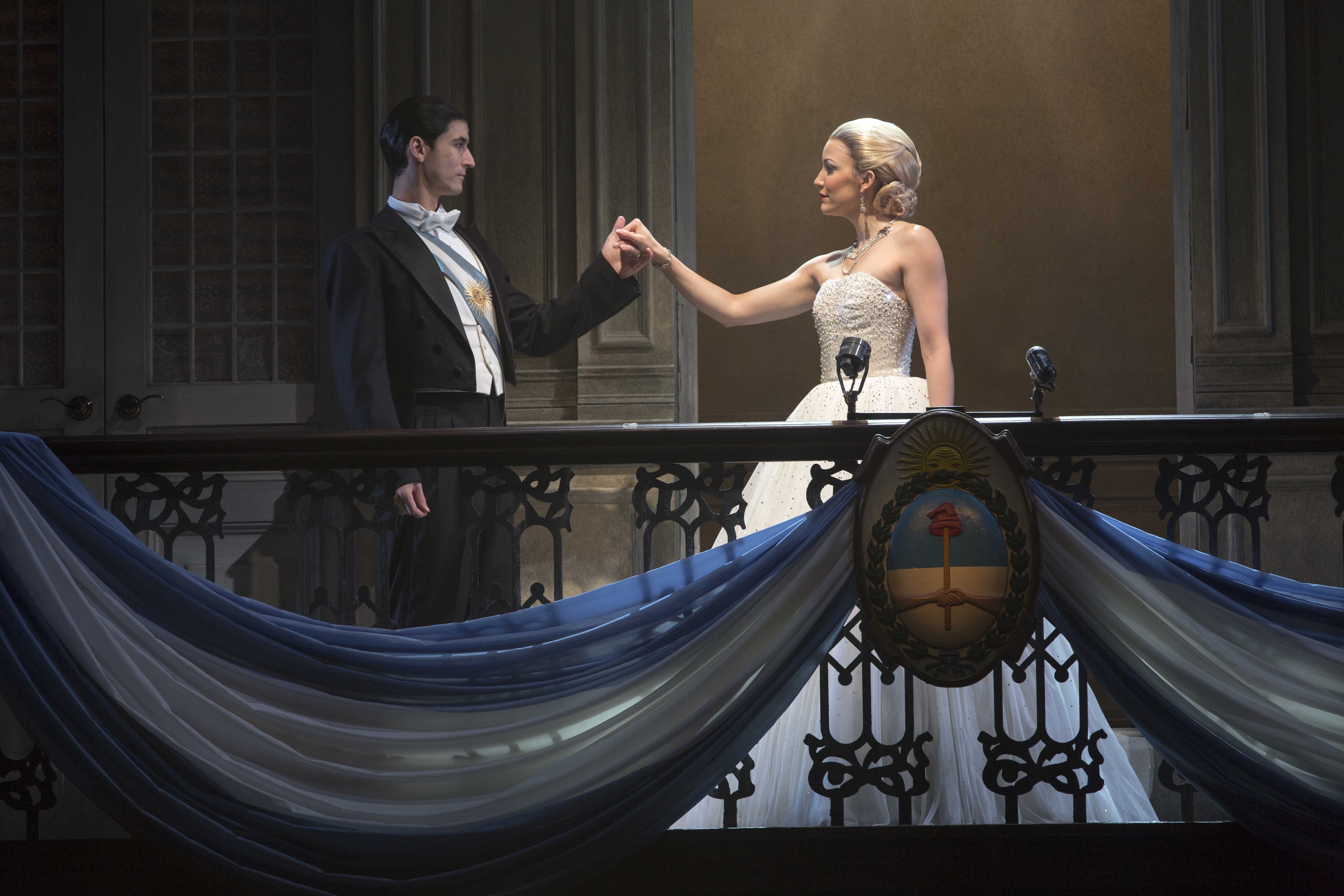 The Orpheum Theatre is going through a retro-fabulous phase this season; Broadway blockbusters musicals of the 80s are the current exhibit. So many of these shows have become popular icons that it’s easy to forget that they were considered daring and controversial when first unveiled. The new touring production of Evita, which opened Tuesday, January 28 at the Orpheum, does not shy away from some of the rough edges that made the show famous.

Technically, Evita is a child of the 70s; the original Broadway production opened in the fall of 1979, just six weeks before the Iran hostage crisis began. That production ran for four fruitful years and its West End counterpart in London for eight. This may seem like peanuts compared to the record set by Phantom of the Opera – still going strong today at 25 years – but in its day Evita was a very popular show indeed, much like its eponymous character.

A biographical show about a woman famous for mesmerizing and energizing crowds demands a powerful and radiant lead; Caroline Bowman fit the bill and rose to the occasion. Her first act performance splendidly captured the mix of anger and ambition that fuels Eva Peron’s on-stage rise to power, a journey that leaves more than broken hearts along the way. The young Eva/Evita has an impressive (and slightly one-note) façade of invulnerability in the first act, but after intermission glimpses start to show of a hidden, vulnerable side. It is the songs that engage with this vulnerability, whether professed (“Don’t Cry for Me Argentina”) or actual (“You Must Love Me”) that make her most enchanting and seem like more than flashy spectacle.

Flashy spectacle is still on prominent exhibit: The Evita tour has a large cast that is put to use in numerous elaborate production numbers. The opening and several dance numbers make prominent use of fog machines to excellent visual effect; although there were a few technical glitches with the set on opening night, the stage is well decorated with a suitable air of grandeur and variety. A steamer trunk ballet of sorts, “Rainbow High”, injected a strong dose of adrenaline into the second act’s arm.

This touring production of Evita is based on the 2012 Broadway revival and has been on the road since last fall. One of the new elements, its choreography, is unfortunately decidedly not fresh at times and is overly reliant on repetitions of a very simple pattern of tango steps. This was not out of place the first few times it appeared, but wore out its welcome before the first act was halfway through. A glimpse of some of Argentina’s other Latin dances would have injected much needed variety without requiring musical changes; a journey into some of tango’s more advanced figures would also have been welcome. In several numbers, the dancers also seemed guarded in their movements – precise, but measured, as if still unsure of the space.

Evita focuses on its star character, but much of the commentary comes by way of Che (Josh Young), the narrator, who carries the show from beat to beat. Josh Young shined in this vocally demanding role. Sean MacLaughlin and Krystina Alabado gave excellent supporting performances, but Bowman and Young were unmistakably the brightest stars.