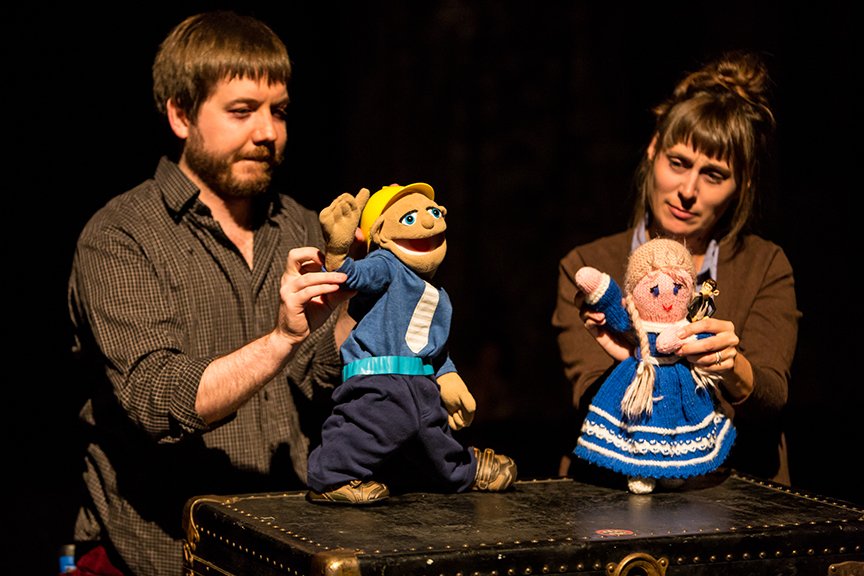 As an audience member at the Twin Cities Horror Festival, one hopes that the most unsettling thing you’re about to see in Four Humors’ Doll Collection is the very first thing you see when you enter the theater. Every single seat in the Southern Theater holds a doll or stuffed animal. Words and even pictures don’t do it justice. You really have to see it for yourself. It’s a brilliant little theatrical flourish to kick off your viewing experience. Followed of course by the fact that you then need to choose your seat, and decide what to do with your inanimate companion. Winnie the Pooh sat on my lap while I took notes, as a sort of security blanket. You hope that’s the most unsettling thing you’re about to see. You, of course, would be wrong.

“The neighbors are practically deaf so you can scream all you want.”

After a few minutes of a child’s music box doing covers of songs that aren’t exactly nursery rhymes, a living doll (Katie Kaufmann) in a bright red dress and porcelain face makeup, twirling a regular doll-sized parasol, comes clumping down the Southern Theater steps through the audience at her own robotic pace and rearranges a few of the dolls (yes, more dolls) onstage. Then she brings on some real human playthings (Brant Miller, Matt Spring, and Keely Wolter), who she arranges and grooms to her liking, just as a little girl would play with her dolls. Once they’re presentable, it’s time for the human toys to perform for the doll.  Doll Collection is just that, a collection of darkly comic vignettes involving dolls, playing to all our worst instincts to be creeped out by the not quite human things. Director Jason Ballweber wrote the pieces in conjunction with Miller and Spring, with additional material from Kaufmann and Wolter. Four Humors is very good at poking those sensitive spots in our psyches.

“The problem with hopes and prayers is that you never know who or what is listening.”

There’s a guy who is obsessed with the notion that his doll moves when he isn’t looking, and how that staring contest goes horribly awry. There’s a sequence in which a young woman goes home with a ventriloquist and his horny, verbally abusive dummy (what could possibly go wrong?) One scene has a cutting-edge doll maker being interviewed about a new line of dolls where even the dolls don’t know they’re not human—and there’s an ax nearby. Of course, you gotta throw a scene with a blow-up sex doll in there, right? Blow-up sex doll society has a way of dealing with misbehaving human beings.

“I am flesh and blood. He is cloth and stuffing.”

There’s also a delightfully twisted “children’s story” (well, a story with a child in it) acted out with dolls in which a young girl accidentally turns one of her toys into a kind of voodoo doll which goes to extremes to grant the girl’s desire that her daddy never leave home to go on a business trip. Daddy thinks he knows how to handle this situation. Daddy is wrong. The spirit of another little girl very persistently haunts an island full of dolls and the two men who are unfortunate enough to land on it.

“Do you want to be normal, or happy?”

The closing scene performed for the human doll lady focuses on a happily married but childless couple who have focused their loving attention instead on a set of doll babies. The story they tell the audience offers a lot of food for thought, and is a fitting cap to the humans’ performance for their doll controller.

The actual end of the show takes us back to that framing device of “doll playing with humans like toys.” Coming after the doll parents, it seems a little unnecessary. Not that it’s not disquieting, the previous material was just stronger. In fact, nearly all of the vignettes pack quite a punch, some in ways you don’t see coming. As with some other horror offerings, sometimes leaving things unexplained and unresolved is more effective than trying to tie things off with a bow. Letting the effect of the doll parents, for instance, just hang in the air as we fade to black, and never giving resolution to the doll and her captive humans, actually might have left the audience with more ambiguity about human/doll relations (and just why they creep us out so). That said, Doll Collection is still a collection of dolls you won’t soon forget (or want to turn to back on).