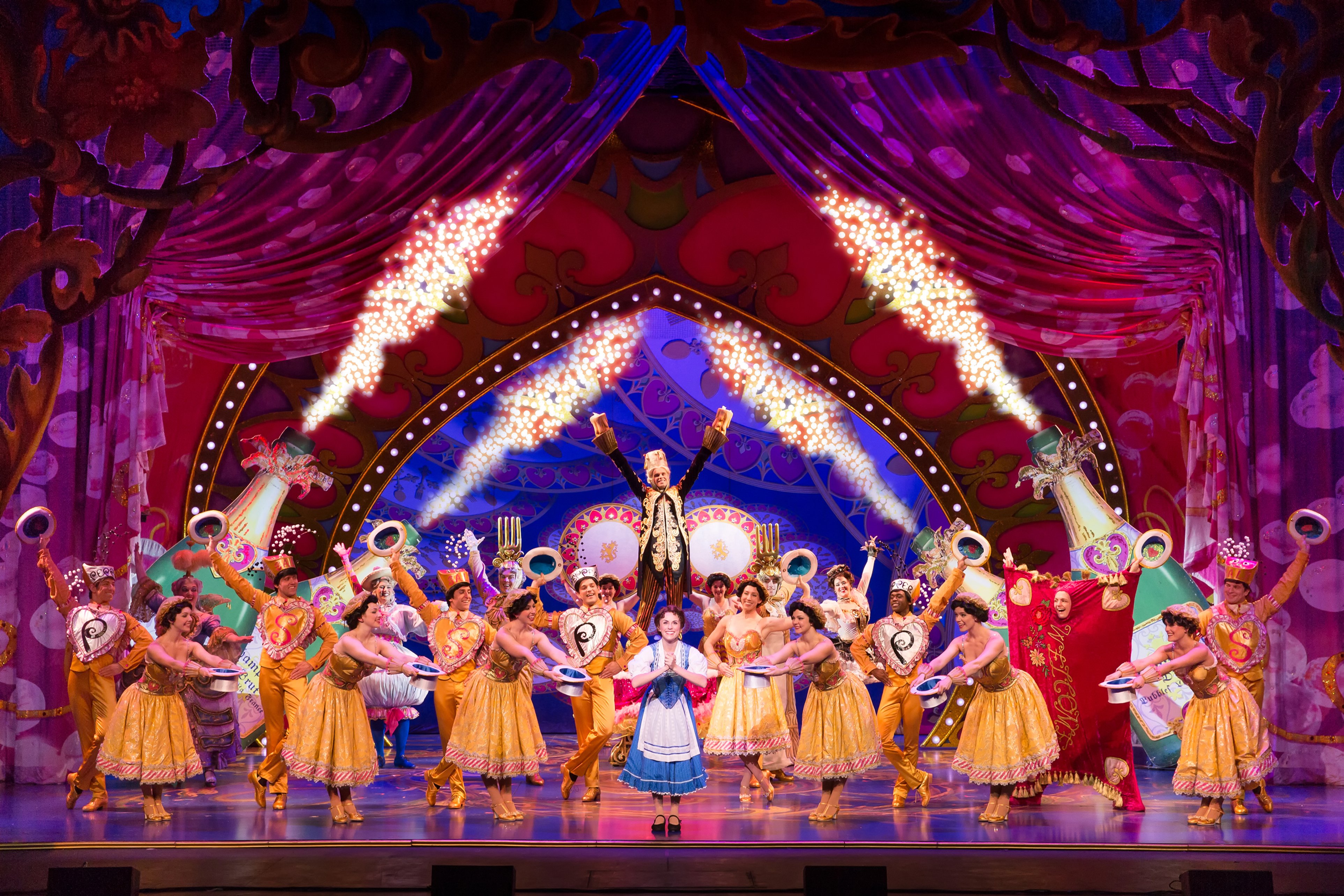 The crowd that filled the seats on Tuesday, Mar. 10 for the opening night of Disney’s Beauty and the Beast consisted heavily of children, but that doesn’t mean their parents weren’t humming along during intermission (and in the bathroom). The age range indicates throwback Disney movies aren’t going anywhere (as if there was any question), and reincarnated forms like the musical production of Beauty and the Beast only prolong Disney’s success. Among being a master at creating ear worms, Disney productions strike a chord with generations across the board, even despite the criticism the movies have received on social issues like gender and racial stereotypes.

Beauty and the Beast is set in a 19th-century French village where Belle (Jillian Butterfield) finds herself wanting more than what “this poor provincial town” has to offer. Because she is a voracious reader and her father is an eccentric inventor (Thomas Mothershed), the people of her small town treat her as an outcast (“Look there she goes that girl is so peculiar / I wonder if she’s feeling well / With a dreamy, far-off look / And her nose stuck in a book / What a puzzle to the rest of us is Belle”). What really makes people—especially the women—question Belle is her rejection of the egotistical town hunk, Gaston (Cameron Bond), who’s drawn to her beauty and sets out to marry her. When Belle’s father ends up imprisoned by the Beast (Ryan Everett Wood)—a once handsome prince whose exterior was made to reflect his inner self when a beggar woman cast a spell on him after he closed his mansion doors on her—Belle offers herself as prisoner in exchange for her father’s release. Though Belle is the Beast’s prisoner, the two manage to find common ground and form feelings for each other (turns out the Beast is just a spoiled brat). Now before you can say “Stockholm syndrome,” the Beast lets Belle free when she finds that her father is once again in peril. In the end, Belle’s love for the Beast breaks the spell, he becomes human again (along with his staff) and she gets her fairy tale that she vicariously lived through so many times in her books, including “far-off places, daring swordfights, magic spells, a prince in disguise” and then some.

When the 1991 movie was made, Belle was created to be a strong heroine who’s motivated by more than just to fall in love after receiving criticism for Disney’ negative depiction of women in previous films. Even though she ends up married (this is Disney after all), the message of falling in love with someone in spite of their appearance (and maybe even their bad manners) is as good as you can ask for. The non-movie songs (the Beast’s “If I Can’t Love Her” and Belle’s “A Change in Me”) strive to give Beast and Belle more depth. But “A Change in Me” unravels everything Belle is supposed to be in its attempt to explain Belle’s motive to ditch her dreams for a dude (“I never thought I’d leave behind / My childhood dreams / But I don’t mind / I’m where and who I want to be”). She comes off as weak, nothing like the strong, independent woman she embodied in Act I.

The touring production, only in Minneapolis through March 15, doesn’t do much to cover that it is, indeed, just passing through. While the costume design by Ann Hould-Ward is a vision and the set design (Stanley A. Meyer) looks like it could’ve been ripped from on screen—not to mention “Be Our Guest” and “Gaston” are colorfully and cleverly choreographed (Connor Gallagher)—the production lacks that wow factor that, say, The Lion King Broadway musical delivers. Based on the 84-minute animated Disney flick, the staged musical manages to make the story last almost twice that at 150 minutes, which proves to be a little long for the restless little ones in the crowd (there are six reprises according to the program). But despite its flaws, you’d be hard-pressed to find someone who didn’t leave the Orpheum Theatre with a little hop in their step. Kids will laugh at Gaston’s squirrely and acrobatic sidekick Lefou (Tony D’Alelio) and adults will get a kick out of Lumiere (Patrick Pevehouse) and Babette’s (Melissa Jones) not-so-subtle sexual tension. Because in the end it’s Disney, and people still love Disney,