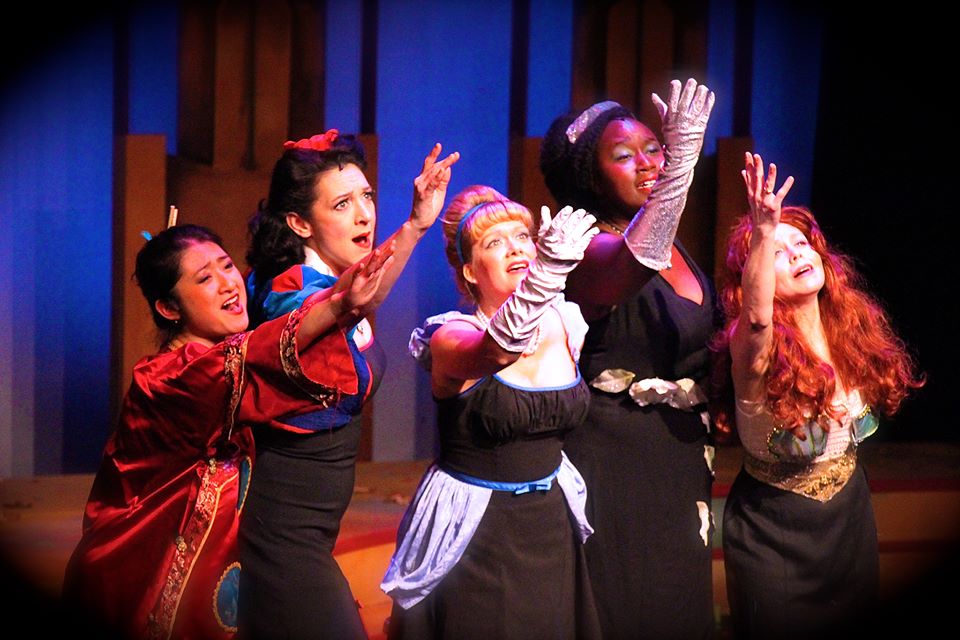 The cast of Disenchanted! sing their wishes in "Once Upon A Time". Photo courtesy of Casting Spells Productions, LLC.

Disenchanted!: A New Musical Comedy That Gives Fairy Tales the Bird is a very timely show. In the past year, numerous memes have swept across the Internet critiquing the tropes of Disney fairy tale princesses, roasting the company’s brand management for altering beloved characters’ body proportions, and presenting alternative takes on everything from costume designs to post-credit-aftermath to the fundamental morals derived from the stories that the company has adapted. At the same time, the Disney/Pixar steamroller continues to cut across (and, according to some, pillage) cultures, with millions of official Frozen Elsa costumes reportedly sold in the lead-up to Halloween. That these trends do not sit well together gives ripe potential for comedy, and this show cleverly revels in those tensions.

This brainchild of composer-playwright Dennis Giacino–himself a former Disney World Cast Member–has a smart premise, a flair for bitingly funny satire, and the all-important timing of its comedy down pat. The show features a cast of fairy-tale princesses venting about how Disney has ruined their stories, their happiness, and (especially in one case) their sanity. Well-honed dialogue, amusing song lyrics, and a bit of old-fashioned vaudeville mix onstage into a cocktail of laughter in the seats. At the show’s opening performance, where a large portion of the audience wore costumes, comic book heroes, monsters, and more than a few tiara-toting ladies (and gents) kept up a regular murmur of chuckles punctuated by eruptions of laughter. There’s a lot of word-play, some excellent running gags, and the songs don’t disappoint, either.

Much of the show is hosted by Snow White (Jen Burleigh-Bentz), who takes on something of an MC role with the assistance of fellow princesses Cinderella (Bonni Allen) and Sleeping Beauty (Katherine Tieben-Holt). Without giving too much away, songs tackle topics like sexed-up character designs (“Big Tits”), the anorexia required to maintain an idealized figure (“All I Wanna Do Is Eat”), lack of royalties (“Not V’One Red Cent”), Mulan’s lesbian leanings (“Without the Guy”), and more. A variety of other princesses are played by Kim Kivens (much better employed than in her recent Fringe appearance), Stephanie Bertumen, and Joy Dolo. Although some of the voices are much stronger than others, the comedy shines strongly through all of these performances.

Disenchanted! has been working its way through the regional theater circuit for the past several years, something that shows in its polish and refinement. This is a show with the legs to go places–and, indeed, the current Minneapolis run by Casting Spells Production is its last stop before opening Off-Broadway for the holidays. If Disney’s been part of your diet, catch it while you can.