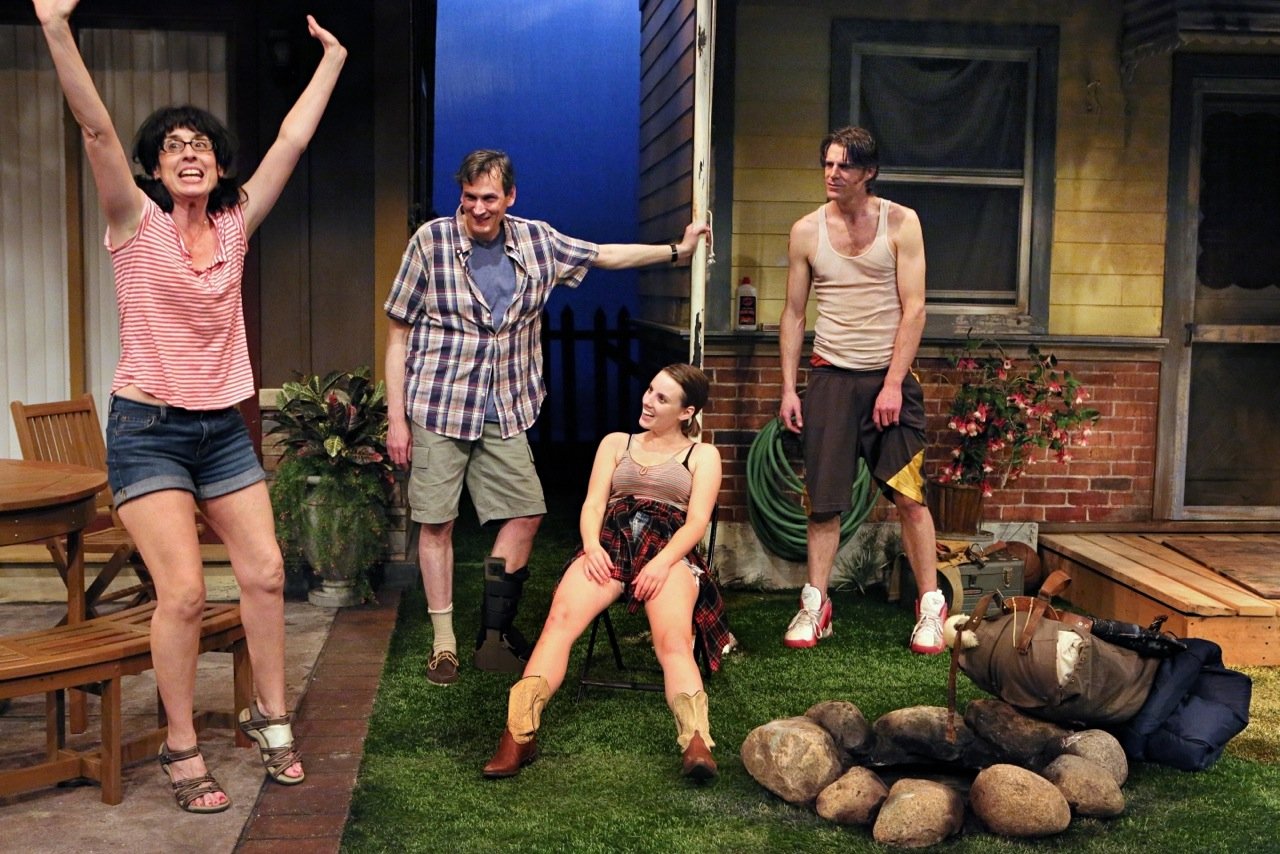 The characters in Lisa D’Amour’s Detroit at Jungle Theater are a mess. Take a suburban couple, add two just-out-of-rehab neighbors, and mix them on the lawn with alcohol and a grill. Stir vigorously, spice with lies and cascading revelations, and wait for problems to (a)rise. This delicious dish takes 110 minutes to prepare and is most definitely cooked on high.

Things burn in Detroit, both figuratively and literally. The special effects of this production are fantastically executed and of the sort to make insurance buyers weep and fire marshals lose their hair. Characters suffer graphic injuries, things get smashed, and the physical and emotional devastation piles up even as the flames lick higher into the air. Hamburgers sizzle, smoke wafts out from the grill, and the smell of burning food hits you just as the characters notice. And, yes, that’s a real fire erupting onstage – hopefully not a metaphor for the real-life Detroit, which is pretty down on its luck already.

Is this play a drama? A comedy? A snapshot of one messed-up piece of real life? It’s all of these things, unfolding in a generic but run-down piece of suburbia that could just as easily be on the outskirts of Motor City as it could be in the heart of Camden – places that have seen better times. Long-time residents Ben (John Middleton) and Mary (Angela Timberman) seem to have things mostly together, in a fairly dull but stereotypically WASP fashion – but the more they get to know their new neighbors, the more the audience learns that plenty of problems lie beneath the surface. The progressive reveals make the characters more compelling and interesting as the play advances.

This is not to say that their neighbors have nothing to hide themselves – far from it. Sharon (Anna Sundberg) and Kenny (Tyson Forbes) are supposedly just out of rehab and making a fresh start, but frequent slips in their stories make it clear that they, too, are not quite what they seem. There’s plenty of schadenfreude in watching the awkwardness as the quartet become friends, make plans, and take a shot at whatever it is they’re trying to attain. (Whether or not that last one is what they say it is is another matter.) As the pace picks up in the second half, the audience become onlookers to a splendid meltdown-in-progress. It’s delicious fun if you’ve ever been ticked off at your neighbors’ antics (and who hasn’t), and seeing what will be broken and who will be injured by what next is part of the main course.

The slowest part of Detroit is its last scene – an epilogue that runs too long while explaining what the audience has probably guessed. It’s worth it, though, to gaze a little while longer at the smoking ruins of the American Dream on this stage.