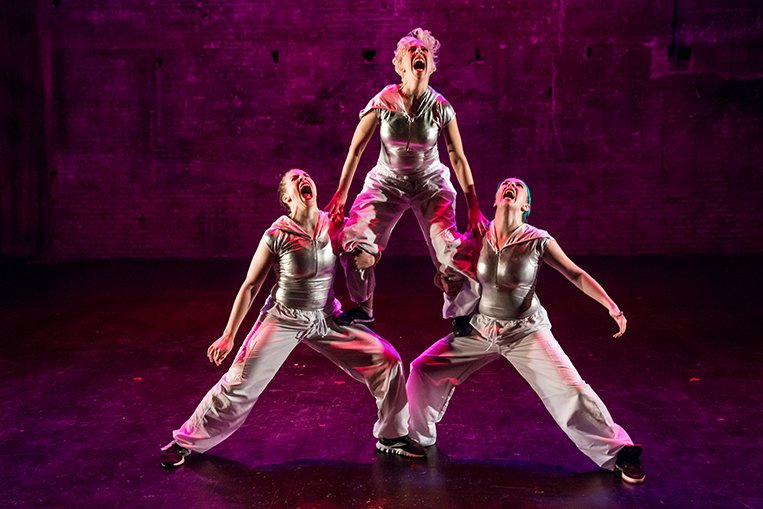 Regan K. Saunders, Jessica Schilling and Erin Sheppard as Cerberus in Dance With The Devil as part of the Twin Cities Horror Festival; photography by Dan Norman

One of the many great things about something like the Twin Cities Horror Festival is that I get introduced to all kinds of artists I might have missed before. For instance, I wasn’t familiar with the work of dancer/choreographer Erin Sheppard or storyteller Rita Boersma, but after seeing them in Sheppard’s TCHF offering Dance With the Devil, I’m a fan.

“How could these sins be avoided, and how are there only seven of them?”

Sheppard has enlisted the help of fellow dancer/choreographers Rhett Romsaas, Regan K. Saunders, and Jessica Schilling, as well as the dancing talents of Coralee Kaivo, Caroline Sable and Rob Ward, to create seven short dance pieces that are all in some way dancing with, making a deal with, the devil. At first it seems the pieces might be only thematically related, but the final work brings them all neatly together.  Nice trick, nicely done.

“He should be more than the memory of a boy in a blizzard.”

Sometimes we see the results of the deals with the devil right away, sometimes the payoff is delayed. Someone lonely gets a dance partner. Someone casts a spell to resurrect a loved one from the dead (nothing ever goes wrong with that, right?) A pop music star’s biggest fan learns a little too late that fame (and your backup singers) can turn on you. A man who used be unable to get his dream girl’s attention suddenly can’t get rid of her. We also get a dance trio who portray Cerberus, guard dog for the gates of hell. There’s a lot of variety and good storytelling among the dance moves throughout the show.

“I can out sweat anyone in this room even at a resting heart rate.”

Interspersed with the dance numbers, Rita Boersma offers up her meditations on the seven deadly sins. Though there’s copious humor throughout, Boersma doesn’t shy away from the serious side of her subject either. Her understanding of sin has evolved since her Catholic schoolgirl days, and has as much to do with addiction issues in her family as it does her relationship to the church past and present. Sin doesn’t hinge so much for Boersma on what we do as what we don’t do – sins of omission, not living up to one’s full potential. It’s a fascinating conceit and she makes a strong, and funny, case for it. Her willingness to be vulnerable and not hide behind punchlines really helped the audience bond with her. It was a great idea for filling out the time between dances that didn’t feel like filler at all. Honestly it felt more like I was getting two shows for the price of one.

“We are good at missing the thing we might be great at.”

Though Dance With the Devil does have a body count, it’s not horrifying and blood-soaked like some other entries in the festival. It is, nonetheless, a great way to get some dance as a part of this horror-filled week.