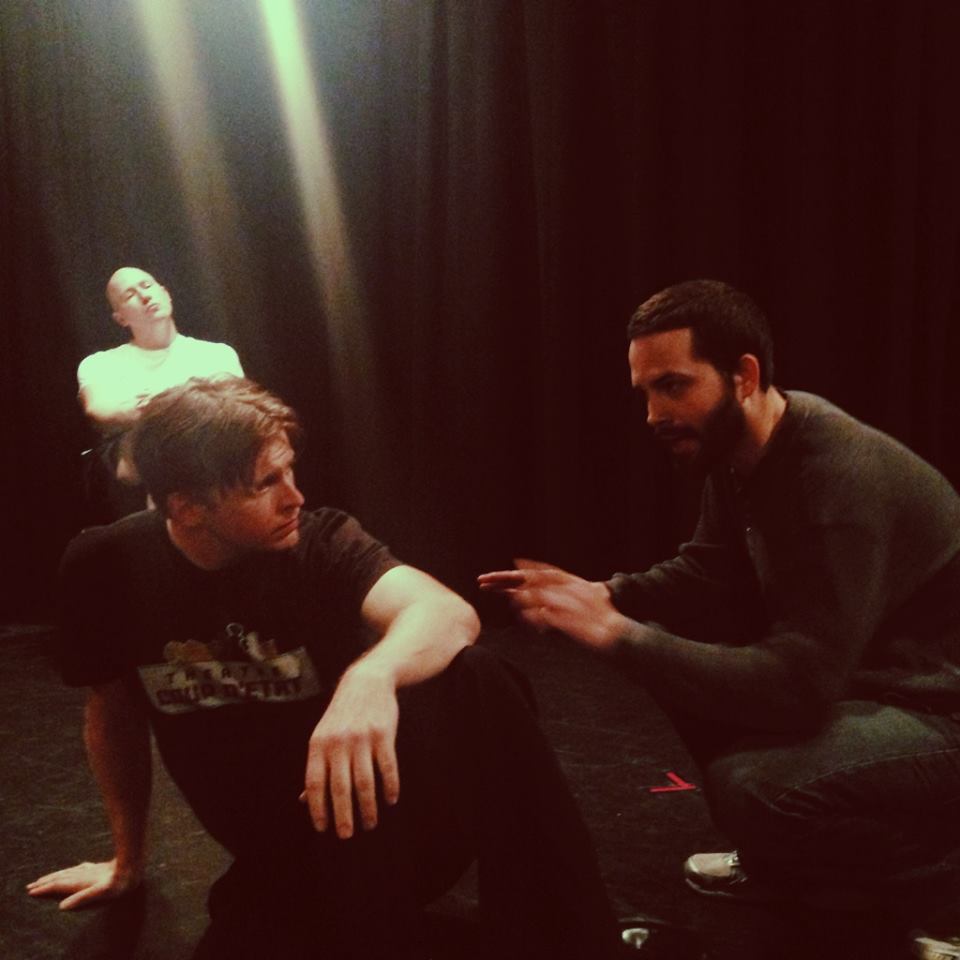 (foreground) Romeo (James Napoleon Stone) is unconvinced by Benvolio (Peter Beard) as the narrator (Adam Scarpello) looks on in the first of 37 rapid-fire deconstructions in The Compleat Works of Wllm Skspre (Abridged); photo courtesy of Theatre Coup d'Etat

It was bound to happen. Theatre Coup d’Etat has spent so much time taking Shakespeare seriously that they were destined to stick a pin in Shakespeare at some point and have a little fun with him. The perfect play with which to do this, of course, is Jess Borgeson, Adam Long, and Daniel Singer’s accelerated comedy tour of Shakespeare’s plays The Complete Works of William Shakespeare (Abridged). The wacky play shows its Fringe Festival origins, being extremely simple to produce, requiring only three actors to get the job done.

“O cursed spite, that ever I was born to exit right.”

Here those three actors are Coup d’Etat leaders Peter Beard and James Napoleon Stone, and Coup d’Etat regular and fight choreographer Adam Scarpello. As is the custom with this play, they use their real names and refer to each other as Peter, James and Adam. Peter does the female roles as necessary, including rather outlandish big haired wigs and ridiculous dresses. Also, as is pointed out to him by his fellow actors later in the action, all of his tragic Shakespearean heroines feel the need to run around the audience pretending to vomit right before they die.

“I will not do dry, boring, vomitless Shakespeare!”

First they skewer Romeo and Juliet, at one point dragging on a large plastic skeleton as a much-used prop and stand-in for various characters throughout the night. Something else that gets a lot of use throughout the show are swords. One upside to having a company who’s used to putting on a good sword fight in an actual Shakespearean tragedy or two is that they can put on quite a show even on the tiny Bryant Lake Bowl stage. The previous experience of all three actors in this regard shows. Oh, they often play the swordplay for laughs, but there’s a lot of deadly serious skill at play as well. It’s an added level of fun and puts the use of weaponry in sharper relief than if some other actors were just goofing off.

“The version in which appears the famous chihuahua scene.”

Titus Andronicus, where the title character serves up his daughter’s rapists to their mother in a pie (no, seriously) is transformed into a perverse cooking show. Othello with three white guys could get very uncomfortable, but they quickly detour into white guy rap instead, proving there are rhymes for everything, including Desdemona. For instance:

They make quick work of all 16 comedies by putting the plot elements and the titles in a blender and dealing with all the twins and shipwrecks and women dressed as men and people coming back from the dead and even the bear all in one big ridiculous plot.

Outrageously broad Scottish accents (and more swords) quickly finish off Macbeth. A Marlon Brando impression ties together Julius Caesar and Antony and Cleopatra. We get an attempt at a little Troilus and Cressida before moving into a football game in which the crown for rule of England keeps getting passed up and down the field between King John, Richard II and Richard III, and Henrys IV, V, VI and VIII.  King Lear cuts in (“Cordelia, go long!”) before getting a penalty called for “fictional character on the field.” They sidestep Coriolanus because one of them is uncomfortable doing “the anus play.” One of them has the mistaken impression that Shakespeare wrote a play called Chernobyl Kinsmen (Uh, that’s Two Noble Kinsmen). That just leaves—oh no, Hamlet.

“Shakespeare when he was younger went through a ‘blood and guts’ period.”

Coup d’Etat could gamely make all sorts of inside jokes about the fact that they won an Ivey Award for 2013’s production of Hamlet, but instead avoid the topic altogether. If you saw it, then it’s funnier that Peter (Hamlet in 2013) steadfastly refuses to do the play now. Adam actually takes on the role of Hamlet. Peter instead is Hamlet’s mother Gertrude, uncle Claudius, girlfriend Ophelia and a host of others. James reprises his turn as Laertes among others. The second half of the show is all lampooning Hamlet. A fuller telling first, then a faster version, then faster still (a gunshot apiece of finish off each of the three actors), then, what the heck, why not do it backwards quickly? “Listen for the Satanic messages,” they admonish the audience. The one cheeky in-joke on their own production of Hamlet is the one moment in which Claudius is being fed his lines through an earpiece (I almost laughed quite loudly at that, then I felt mean and restrained myself.)

“As soon as you said Agamemnon, I fell asleep.”

I was struck this time in watching the play by how much of it is almost “straight white frat boy humor.” Not dumb by any stretch. No one could either write or perform this script well without a keen intellect and a thorough background in the classics. But there’s a lot of humor based on discomfort with intimacy (“Dude, don’t kiss me.”) and oh ha ha, how funny, a guy in a wig and a dress.  Even the improv around Hamlet’s To Be Or Not To Be breakdown revolves around deeply felt emotions while playing a video game. There’s also a vague sense of “F**k this guy!” in the attitude toward Shakespeare and his plays that goes beyond the usual irreverence to something almost dismissive and hostile. Do I actually think they hate Shakespeare? No. Does it seem like they’re trying to work out some pent up aggression against a playwright who constantly challenges them but is long dead. Yup.

“Where, in a scene of timeless romance,
He’ll try to get in Juliet’s pants.”

The Compleat Works of William Shakespeare (Abridged) is kind of perfect for the Bryant Lake Bowl. A place where you can eat and drink, and play drinking games while watching the play is ideal (drinking is encouraged in the director’s note, even though they technically didn’t have a director). The intimacy of the space and the relationship between actor and audience works well. If you can’t do a play like this in a bowling alley/bar/theater, where the heck can you?  In a strange way it feels like it’s coming home. Comedy’s hard with a tiny crowd, there were only a dozen there the night I attended, and the cast had to put some effort into engaging us and getting the laughs going. Hopefully as word spreads, they’ll have more people in the seats to play along with the goofiness. If you want to unwind at the end of the day with a dumb laugh that’s not as dumb as it seems, The Complete Works of Wllm Shkspr (Abridged) should do the trick.