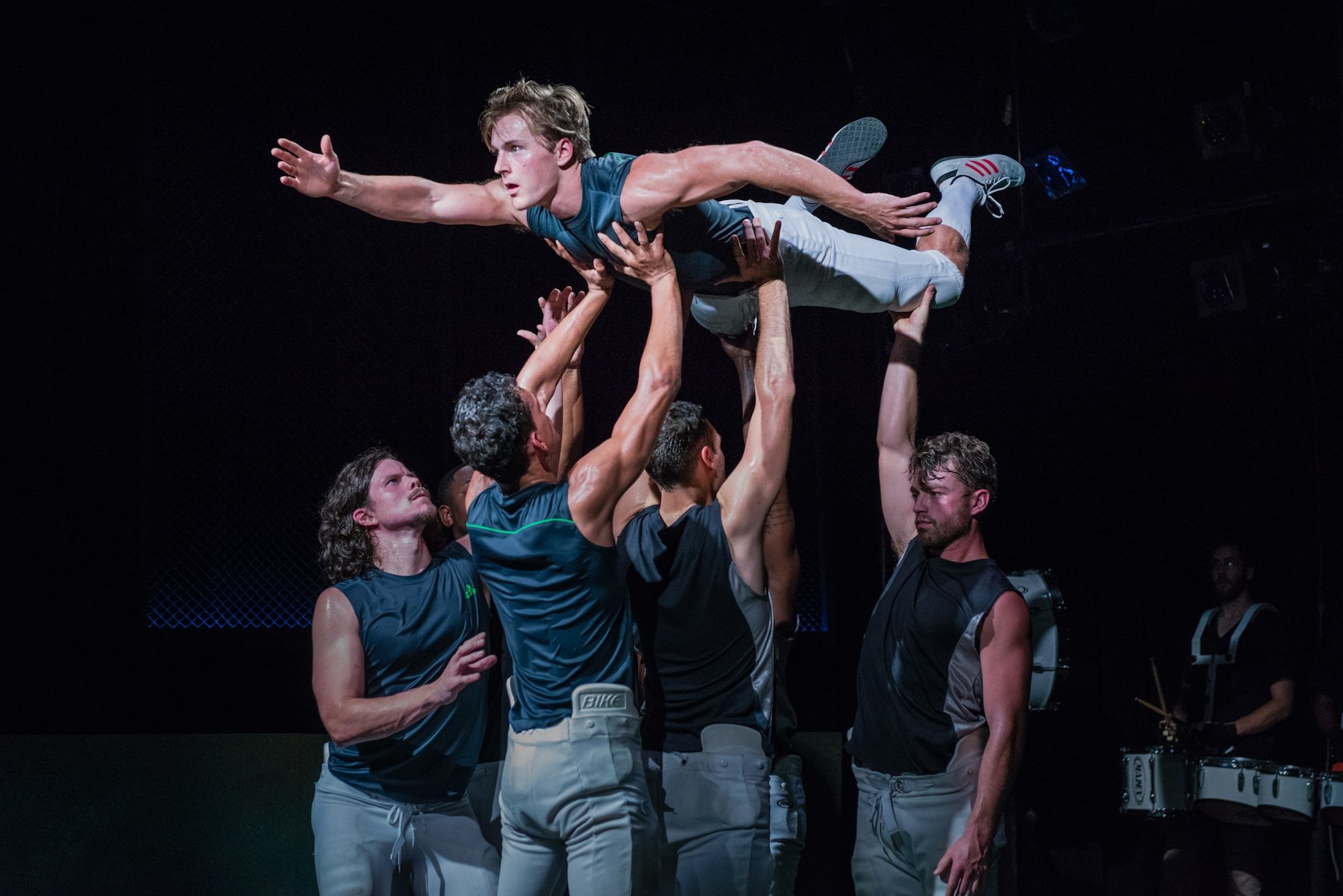 Playwright Andrew Hinderaker’s mentor challenged him to write an unproducible play. So Hinderaker created a story that required a football team, a drum line, a modern dance company, and an actor in a wheelchair who is quadriplegic (21 performers in all). The play was structured to take place just like a football game—four quarters of 15 minutes each, plus a halftime show, and a pre-show warm-up. That play became Colossal, and instead of being unproducible, it’s getting a rolling world premiere at five different theaters across the United States as part of the National New Play Network. One those theaters is Minneapolis’ own Mixed Blood. Colossal lives up to its name and then some, in both physical size and emotional scope. It’s a powerful meditation on the seductive power of America’s most popular contact sport (some would argue its most popular form of entertainment, period).  It’s also a haunting rumination on the way young men punish their bodies for a shot at glory, and punish their hearts in the elusive pursuit of love—a love of people and a sport that may not love them back.

Mike (Toby Forrest) struggles both with his body and his pride as he seeks to gain some independence in his new wheelchair-bound life after an accident on the football field. Both his physical therapist Jerry (Ansa Akyea) and his father Damon (David Deblieck) battle Mike’s resistance in an effort to help him adjust. Mike’s former Coach (Stephen Yoakam) brings him in to lecture young athletes on playing the game safely. But Mike’s continued return to his past game tapes, and the game that changed his life forever, conjure up unforgiving memories of his past. Mike’s younger self, of little more than a year ago, is an almost unrecognizable mirror image. With full use of his arms and legs and his body in peak physical condition, young Mike (Torsten Johnson) taunts present day Mike with an athleticism he will never recapture. In addition, young Mike’s passionate devotion to his team co-captain Marcus (Darius Dotch) breaks the boundaries of the homoeroticism of sports and confines young Mike’s body not to a wheelchair but a metaphorical closet—unable to bring the true nature of their relationship out into the light of day.

“I’m the only boy in the history of the United States to disappoint his father by choosing football over dance.”

Mike and his father—a noted choreographer—must also make peace with the rift Mike caused by first choosing football over a career in dance in his father’s dance company. That previously mentioned half-time show is an example of Mike’s work with his father and his dancers, pushing their bodies in a different way to create another kind of ensemble movement on a stage rather than a green field. This glimpse into Mike’s other possible life makes the loss of the use of his limbs that much more heartbreaking. But it also provides Mike and his father with a physical language they can use to help heal some wounds.

“You think anyone cares about how your story plays out?”

This makes Colossal sound like it’s loaded down with gimmicks, but it’s fascinating how quickly you forget things like the scoreboard that keeps counting down the minutes in each quarter, or the fact that, despite the audience being seated on bleachers, we are not in a stadium. Director Will Davis and choreographer Angharad Davies have worked together to create a language of movement that blends football and dance so that the violence and chaos of the sport can be contained on a stage but not confined by it. Though it’s never a literal football game with a hundred yards of space to play in, the audience is dropped right into the middle of a gridiron battle that seems all too real, even as it descends into slow motion interpretive fantasy. The violence and shocks of this game are reinforced by the work of the drum line under the music direction of composer Joe Pulice. Karin Olson’s lighting helps transform Joseph Stanley’s set (an abstracted green field that might also be a chalkboard on which plays are diagrammed) into any environment a scene requires, even if that place is deep inside Mike’s mind.

Though the dialogue of Colossal packs a lot of power in a short period of time, some of the most powerful moments in the story are visual – focused sometimes with uncomfortable intensity on the beauty and fragility of the human body. Alone in his room, Mike struggles to rise from his chair. In that moment, the rest of the football team (Mathias Becker, Ryan Colbert, Casey Hoekstra, Darrick Mosely, Josh Wilder, and Ian Zahren) all rise as one to their feet in a single fluid motion. It’s easy to stand, until you can’t. Those same football players again serve as silent witness when Mike’s therapist Jerry speaks to him about his various other clientele from the sport of football. As Jerry catalogs each catastrophic injury, one of the young seemingly invincible football players moves to stand by Mike’s wheelchair, until Mike is surrounded by young men who will one day succumb to the future Jerry describes.

“When I’m through with you, you’re gonna live in the past.”

Young Mike taunts his future self in the wheelchair often with the simplest of moves. At the sight of his favorite T-shirt, young Mike peels off his workout uniform revealing his chiseled frame to the audience and Mike in the wheelchair for the first time. He lets him look, then easily pulls on the T-shirt that clings to his torso.  Meanwhile, Mike in the present struggles with his own T-shirt, reluctantly accepting help from his father, as his atrophied muscles fight him the whole way. Young Mike is on display in a completely different fashion in the halftime show where his dad’s dance company and the drum line (Gabriel Blackburn, Promise Ehlman, Charles Gehr, Malerie Gutterman, Camille Horstmann, Luis Nufio, Toby Ramaswamy, Spencer Schoeneman, and Simone Thompson) provide a living backdrop to the spectacle of a father and son moving together in graceful unison. There are many times when they seem to be carrying one another, and the audience can’t help but remember that one day soon the father will be helping lift the son again, a son who can’t respond in kind.  Seeing young Mike dance shows the spectators yet another dimension of all that Mike has lost.

“Everyone loves football but the people who don’t know it yet.”

But Colossal isn’t just a one-sided indictment of football. It also helps you understand why the people who play it and the people who watch it love it so much. Colossal also shows us the toll that dance is taking on Mike’s father’s aching body. Basically, Colossal reminds us that anything you love is probably going to hurt. It will require something of you and it won’t always be pretty. You have to figure out if you’re willing to live with the consequences. Love isn’t entirely blind. It makes allowances. But it’s also not without its rewards. For the family on the football field that Mike lost, he gets a chance to reconnect with his father on a deeper level. For every man like Mike or Marcus that runs from love when it’s dragged into the light, there’s a man like Jerry who’s perfectly happy and comfortable with his homosexuality. Things happen. But you control how you respond, and move on.

The best thing about Colossal is that it trusts the audience to be able to make these connections. The story isn’t told in a strictly linear fashion in either the past or the present. People almost never fully say what they mean. Memory is unreliable and changing. But the writer and the production wisely puts the puzzle pieces in the audience’s hands and lets them shape the narrative and find the truth inside it. Even if (like me) you don’t really understand football or dance or men in love, you’ll recognize and connect with the human struggles in Colossal. Emotionally and intellectually, Colossal is an enormously satisfying viewing experience. For an unproducible piece of theater, it turned out remarkably well.