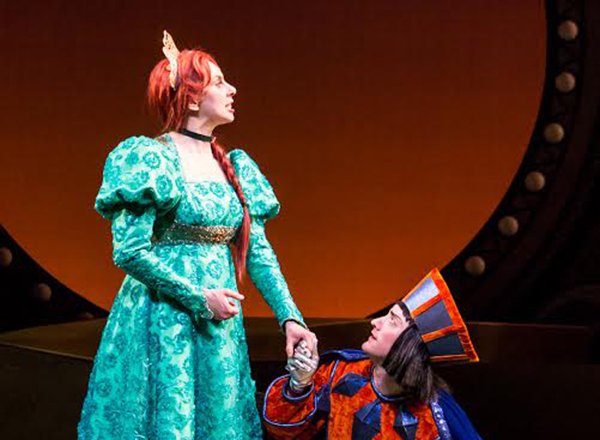 The Children’s Theatre Company’s productions of Balloonancy and Shrek the Musical are dramatically different approaches to children’s entertainment. Balloonancy is like an elegant and delectable fruit tart topped with a small scoop of gelato: eminently enjoyable, balanced, and possessed of a certain elegance. Shrek, on the other hand, is more like a deep-fried Snickers bar: some people will love it, and some people won’t touch it. If you thought that the 2001 movie needed more dancing and a whole lot more fart jokes, you’ll be right at home.

It’s not that Shrek the Musical is an unpleasant romp. Indeed, it has some great bits of stagecraft and camp, including every appearance of Lord Farquaad (Adam Qualls)–one of several instances where this stage production outdoes its animated sibling. Rather, its sins are that the script is highly derivative (much of it straight from the movie) and the music quite forgettable. (There are also a few gaping holes in the plot large enough to fly a dragon through, but this didn’t seem to bother Sunday’s audience.) Its virtues include gorgeous costumes, engaging dancing, and a kick-a** Dragon (Lauren Davis).

Most of the story, of course, follows the triangle of Shrek (Reed Sigmund), Fiona (Autumn Ness), and Donkey (Ansa Akyea). Camp is the name of the game, and the cast take to it with gusto; Sigmund and Ness, both regular members of the CTC Acting Company, have a strong chemistry in moments both pungent and sweet. Akyea’s performance is delightfully campy and a strong crowd-pleaser, able to elicit chuckles from the mixed audience even when the dialogue is quite atrocious. The musical runs two hours but doesn’t feel long.

What more is there to say? Shrek the Musical is a show for people who loved the movie or the original children’s book on which the film was based. You won’t leave whistling the tunes–in fact, you’d be hard-pressed to remember any of them, aside from Neil Diamond’s “I’m a Believer”–but you will leave with some good memories of fun times, a killer Dragon song & dance number, and, probably, an onstage farting contest.