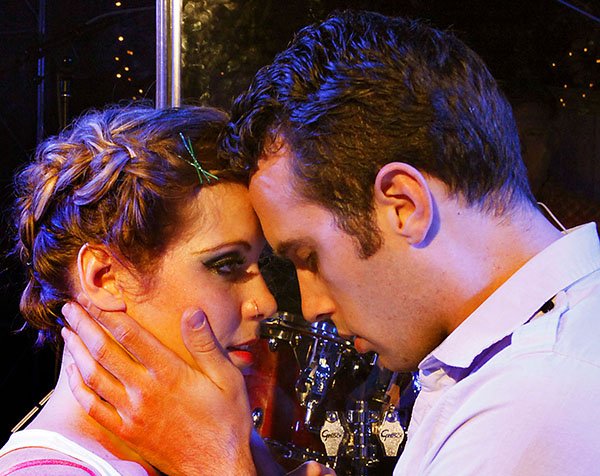 One of the most controversial works of the Twin Cities’ 2013-2014 theatrical season has turned out not to be one of the works glamorizing dictatorship, depicting an imaginary demented cartoon, an infamous and polarizing lawyer, or even any of the myriad plays delving into social issues, violence, modern genocide, or trauma. The lucky winner of this distinction is in fact a rock musical about the United States’ seventh president and events in the early-to-mid-19th century. What this says about audience tastes, artistic programming, or cultural memory is beyond the scope of this review, but it will be very interesting to see if an artistic response comes out of the current storms of controversy.

Bloody Bloody Andrew Jackson is not an historically accurate piece, nor does it claim to be. It depicts the titular commander-in-chief-to-be (Philip C. Matthews) as an emo rock star whose derisive remarks, fawning groupies, and in-your-face hair-trigger responses clash endlessly with Washington politicians and tragically with Native Americans. Many aspects of the script recall the 2006 cult hit movie Idiocracy, an association that cuts both ways. If Ayn Rand had lived in fear of direct democracy instead of communism, this story could easily have worked in The Fountainhead. Such are the source materials, for better or worse.

These reservations aside, there is much to recommend the performances delivered in this Minneapolis Musical Theatre/Hennepin Theatre Trust co-production. The large cast is vocally talented, eye-catchingly dressed and made up, and frequently spills from the stage at the New Century Theatre into the aisles. The rock concert-style numbers are energetic and engaging, and much of the dialogue alternates between hitting hard or tickling a funny bone; the walk between camp and serious is often quite short, but director Steven Meerdink has found a path that avoids any train wrecks. While what the show means will likely take a long time to settle, there’s never any doubt that the individual and collective performances are very finely done.

The basic show narrative is delivered, at least at first, by a storyteller (Amanda Weis) who guides us through an Oregon Trail-like riff on Jackson’s early life to his launching into an iconoclastic career in politics. Matthews embraces the idiosyncrasies of the role, powering through with a charismatic yet disturbing performance. His exchanges with Black Fox (Christian Unser), the Native American leader whose collaborations with Jackson ultimately do not protect him and his tribe, are some of the most tense and loaded moments in the show, overshadowing the “regular” political confrontations. Unser gives an interesting portrayal of the conflicted chief, his face often speaking more volumes than the terse dialogue.

The cast jumps in frequently to lighten things from Jackson’s brooding, making frequent use of the full space to convey the thronging crowds of the story.  This works surprisingly well in rendering the pressing backdrop of frontier violence, and the ensemble takes on a variety of hats as groupies, politicians, and other characters. The script never departs from Jackson for long, though, and it’s Matthews’ portrayal that knits together the episodic commentary and humorous musical numbers sprinkled between the darker ones. What the show means outside the theater may be up for debate, but there’s no doubt that the rendering by the cast is fervently and engrossingly done–even as (or perhaps because) the story leaves you feeling bruised, battered, and a little numb.