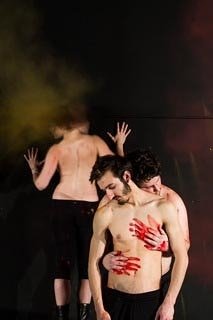 One of the reasons I was looking forward to the first year of ARTshare programming at the Southern Theater was the inclusion of dance companies in the mix of resident artists. After all, the Southern is a great venue in which to see dance, and I don’t see enough dance outside of the Minnesota Fringe Festival each year. I figured having access to regular programming by dance companies already slotted into my schedule would get me out of my habit of only managing to see dance for one week in August. I knew of Black Label Movement, but I hadn’t actually seen one of their shows. Their latest presentation, The Illumination, made me take a closer look at their name. Oh right, Black Label Movement. It’s not strictly dance as expression. It’s theater incorporating movement as one of the primary elements of storytelling. Graceful, exuberant, balletic movement, to be sure, but it’s not a standard modern dance showcase. There’s words to go with all the music and whirling about. Not what I was expecting, but then I was trying to go in cold to this one and not presuppose too much.

“I have great need of your kindness.”

The words here are adapted by New York director/choreographer Scott Rink from the writings of that tortured literary couple Arthur Rimbaud and Paul Verlaine (poetry, letters, and court documents, which gives you an idea of how out of hand things can get). My theatergoing companion wasn’t familiar with Verlaine and Rimbaud but The Illumination doesn’t require you to be. It’s easy enough to follow along. The volatile and selfish poet Verlaine (Alex Brightwell) is married to young Mathilde (Felicity Stiverson) but drawn into a tempestuous sexual affair with fellow poet Rimbaud (Austen Fisher). This bisexual open marriage is funded by Verlaine’s mother (Patricia Kent), just as patient and long-suffering as poor Mathilde needs to be under the circumstances. The whole thing is set to the live musical accompaniment of Joe Strachan on piano and the stunning operatic voice of Kent, performing the music of Claude Debussy and Benjamin Britten. The Illumination is a full visual, aural feast.

“In the ancient park, dejected and frozen, two specters are recalling the past.”

Torry Bends’ set has a large section of the stage floor covered in sand, underneath which are different bands of color. As the performers dance and romp and playfully/violently displace the sand, the color reveals a variety of different patterns that add to the puzzle for the eyes. Behind the sand, engulfing nearly the entire proscenium arch of the Southern is an enormous tilted frame, inside of which is a reflective surface. Not quite a mirror, more metallic in nature. People’s shapes can be seen, but they are distorted, unrecognizable.  In a climatic moment late in the performance, even this frame gets in on the action.

“I follow him wherever he goes.  I have to.”

The costumes of Tracy Christensen are all in shades of biege and white, the better to blend in with the sand, and skin, and the better to offset the vibrant splashes of color that are introduced through the liberal use of brightly colored chalky dust that the actors continually mark each other with each time they touch (or slap, or grab) one another. These vessels of color are also thrown or dropped in the course of the action, adding further visual punctuation to the interactions between the characters.

“We must reinvent love.”

This type of person, that creates their own drama and doesn’t seem to care how their outsized feelings and appetites impact other people, is the kind of soul I normally don’t have much patience for. Being an artist doesn’t give you a license to be a neurotic asshole. The notion’s certainly been romanticized by popular culture through the ages but it’s not something I wish to encourage in other people as a strategy for getting through life. However, the cast here makes it sadly easy to understand how guys like Verlaine get away with their behavior. When you can talk about love and pain so eloquently, and when you focus your attention so intently on one person, it can be intoxicating for the people in your life to be the target of such affection. You’re willing to make excuses for their behavior—at least until the guns are drawn (and sometimes even then…)

“I leapt on every happiness, and wrung its neck.”

The Illumination is a fascinating mix of performance styles. Stiverson as Mathilde rarely speaks, but her dancer’s moves always make her feelings crystal clear to the audience. Kent as Madame Verlaine also doesn’t do much in the way of dialogue, but her amazing singing voice, in concert with Strachan on piano, gives the tale of two misbehaving poets the gravitas it needs to warrant our attention. Brightwell uses Verlaine’s words to seduce pretty much everyone in sight, including the audience (his misogynist rants are repulsive, but they’re all the more stark given the beauty of his poetry the rest of the time—it puts the man’s extremes in stark relief). Fisher as Rimbaud gets to use both Verlaine’s weapon of words and Mathilde’s language of movement to fully express himself. It’s telling that both Mathilde and Rimbaud are introduced facing away from the audience, at first only seen as a bare back in motion, a body displacing sand. We see them first as a body before we ever see their faces and get to know them as human—probably much as Verlaine himself saw them.

“A morbid thirst darkens my veins.”

At an hour, The Illumination is brief, but very full, almost to bursting—with emotion, with words, with movement, with music, with visual spectacle. It may not have been the show I was expecting when I walked into the theater, but it’s a damn fine piece of work nonetheless.