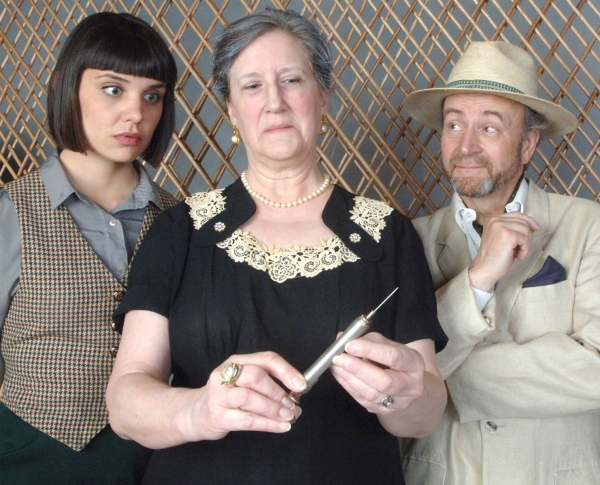 Photo © Act One, Too, Ltd., courtesy Theatre in the Round

“Appointment in Samma,” an ancient fable about the inescapability of fate, has been cribbed by the immortals: W. Somerset Maugham, novelist John O’Hara, and, of course, Agatha Christie for the stage rewrite (extensive at that) of her book Appointment With Death, which receives a pleasant production at Theatre in the Round.

If you came expecting to find profundity, you should have noticed the playwright’s name and stayed home. The packed house that I saw the show with knew exactly what they were going to get—whodunit fluff—and had a very nice time. The plot is skimpy: everybody has reason to hate the Boynton matriach, so, who’s going to beat the other to the task of doing the stuffy old, infernally meddling and manipulative bat in? If you know the story, you’ll enjoy the cast and John Gaspard’s directing. If you don’t know the story and are a fan, you can catch up on your Agatha Christie—and still, of course, experience state-of-the-art professionalism, which what Theatre in the Round at its best is all about.

Gaspard (Rosencrantz and Guildenstern Are Dead, Come Blow Your Horn), whose work is familiar to Theatre in the Round attendees, has a deft touch with the 13-strong ensemble of solid performers. His sure, understated hand, in fact, is exactly what the script calls for, keeping you interested in an unfolding drama that talks a lot but really doesn’t do much unfolding and actually isn’t all that dramatic. You are quite willing to go along because Gaspard keeps you entertained.

Theater in the Round veteran Muriel J. Bonertz (most recently Alan Ayckbourn’s Round and Round the Garden) is quite effective as Mrs. Boynton, a thoroughly unlikable snob and generally controlling witch you could enjoy seeing burned at the stake. Bonertz makes the character a bland, ruthlessly sadistic villain you find fascinating despite yourself, wondering how on earth anyone can be that unfeeling. Dr. Theodore Gerard, a sort of tour guide to this assortment of neurotic well-to-dos vacationing in Jerusalem, gets a skilled reading by Scott Keely (A Man For All Seasons, Angel Street at Theatre in the Round). You get the distinct idea that Gerard, a psychologist, is the only one among them not woefully dysfunction or about to fall apart at the seams. Accordingly, Keely is a subtly mannered observer of and at the same anchor for these foundering headcases.

H. William Kirsch (Bus Stop, Harvey) has quietly established himself as master of the craft, one of the Twin Cities’ more gifted presences. Here he plays Alderman Higgs, a spunk sort who refuses to see his hotel room bullied out from under him by the snooty, hifalutin’ Lady Westholme, done to a fine turn by Anita O’Sullivan (The Cripple of Inishman, Cat on a Hot Tin Roof). Andy Josephson, his first time at Theatre in the Round, is splendid comic relief as the set-upon Hotel Clerk who calmly takes in stride these people who so frenetically take themselves and way too seriously.

Excellently executed, Appointment With Death isn’t a half bad way at all to cap off Theatre in the Round’s 61st season—especially if you’re an Agatha Christie fan. Runs through July 28th.