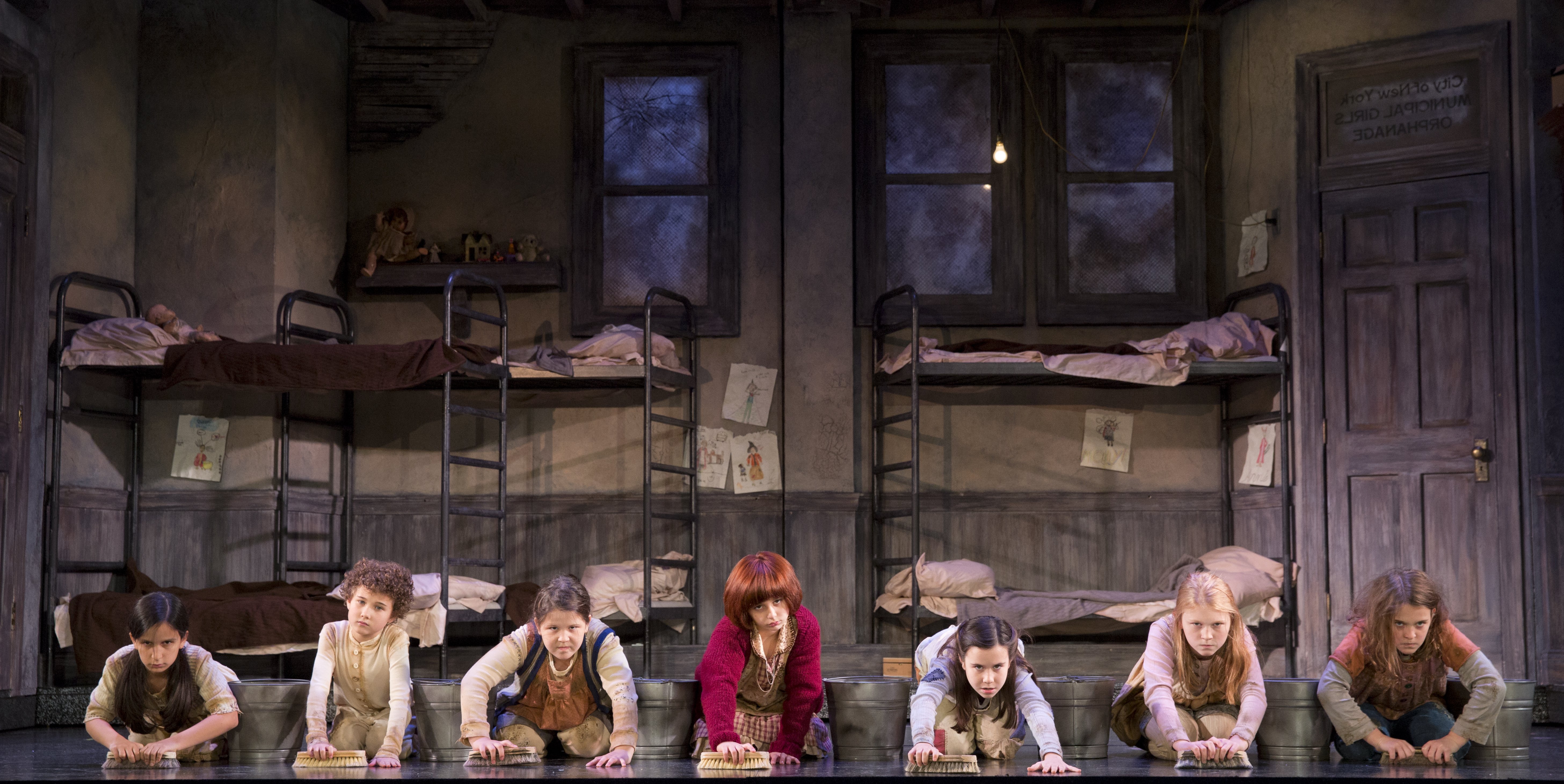 Stop what you’re doing right now and get all expectations of cliches out of your system. Sure, go ahead, say something along the lines of “I’ll see the production ‘Tomorrow.’” Make a few cracks regarding what a “Hard Knock Life” you’d experience if you missed this show. Go ahead and make reference to the barely related Jay-Z track. Just work it out of your system quick. We can wait.

It figures you had one more in you.

Alright, with all that said and done, let’s get down to business: This production of Annie is wonderful. Vibrant and full of energy and optimism, this production feels surprisingly fresh for a play that is almost 40 years old that is based on material from almost 90 years ago. There is a timelessness to Annie’s story much as there is a timelessness to all great myths, a timelessness linked to basic human concepts which we can all understand, if not relate to, in this case the concept of a child seeking basic love and acceptance. It is the strength of this concept that has allowed Annie to be adapted time and again, and it is the universality of this concept that has allowed this production to be translated into 28 languages and to be performed in 34 countries. This most recent production, headed by young Issie Swickle in the eponymous role, captures this essence flawlessly, bringing to life a character that could feel incredibly dated and irrelevant but which feels neither.

Swickle is ridiculously charming in her performance as Annie, managing to perfectly walk that tight-rope of being sweet without ever falling into the realm of saccharine. She has a natural presence and a fantastic rapport with Oliver Warbucks, played by Gilgamesh Taggett. In fact it would be dishonest to say that Swickle didn’t seem to have a rapport with everyone on the stage, be it the antagonistic Miss Hannigan (who will will get to momentarily), or any member of the supporting cast, from Warbucks’ assistant Grace to practically the gamut of Annie’s… co-orphans?

Is that a term?

Let’s roll with it. From Grace to the co-orphans, Swickle’s Annie felt natural, she felt like an individual who had genuinely earned her affections and had, in spite of few on-stage actions, endeared herself to those around her. The audience could feel the same warmth from Annie that the characters felt, and in this none of the relationships felt forced or for the sake of a production: in a short amount of time one could feel relationships built between characters that breathed and were alive.

Everyone in the production was on point, but it seemed none more so than Lynn Andrews, whose performance as Miss Hannigan was completely out of this world. Andrews owned the stage with an amazing performance, displaying an oddly Beyonce-like stage presence, emerging from an ensemble role in much the same way Beyonce emerged from Destiny’s Child to steal the show. Every moment that Andrews’ spent on stage was a treat, and her energy and enthusiasm was obvious in her unforgettable performance. If every hero is only as valid as their foil, Andrews’ made Swickle’s Annie valuable indeed.

As to the set and stage design, the set pieces were gorgeous, evoking a taste of an era long gone, giving a breathtaking sense of depth to the proceedings on the stage.

This production was not without a few opening night jitters. A few miscues on the part of the set crew happened here or there, with a backdrop perhaps overstaying its welcome or overextending itself, but the performances were spot on and immensely enjoyable.

Annie is a fantastic production that may appeal not just to adults, but to youth as well. A number of children were in attendance at the show, and while children and theater may not seem to mix, Annie, with its young protagonist, seemed to give the children in the audience a figure they could in some ways relate to. While the period references would escape the young, the themes are common to all. For those who may seek to give their children a taste of the stage, this may be just the production to give them some appreciation for the theater.

Overall, this is a fantastic show with, obviously, more than a few earworms to burrow their way into your head for quite a time after the production is through. Beautifully designed and wonderfully performed, one would do well not to miss this production of a decades-old classic.