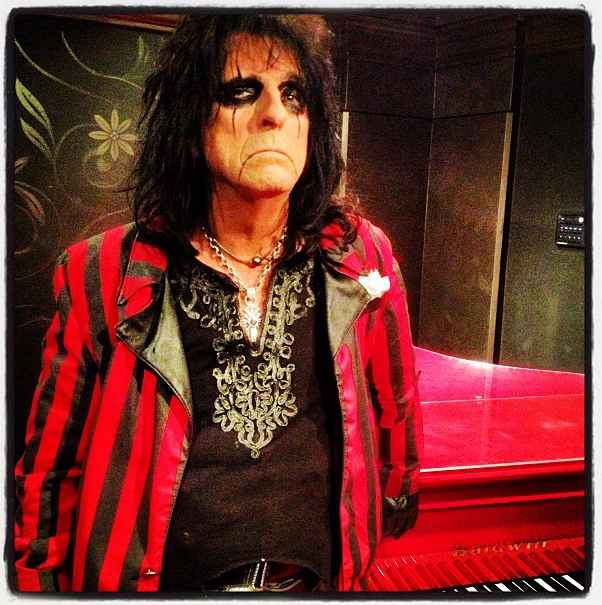 As I said a little bit back, if Alice Cooper is a dinosaur, relic, has-been, or what else have you, someone certainly neglected to inform him. At an age when many just don’t get around that well anymore, he bulls right through a high-energy hour-and-a-half set, doing a national tour hard on the heels of having closed “Masters of Madness: Shock Therapy” on June 30th, a traveling double-bill with Marilyn Manson. July 14 and 15, at the State Theatre in Minneapolis, the ageless, indefatigable, original harbinger of goth-rock left no doubt he’s got plenty get-up-and-go, still possesses admirable ability, and remains a fascinating performer.

It was Halloween in July for fans who, faithful after all these years, flocked give or take 2,100 strong to both shows.  Some dragged kids along—20s, teens, and younger, making it an intergenerational thing. Whatever age, if you were there you had one hell of a fine time. The first night, one fella had a bit too fine of a time, deciding at a concert surrounded by folk was the appropriate setting to drop his trousers (security didn’t agree and the show ended early for him).

There is an enduring mystique about Alice Cooper, a cleverly crafted character by one savvy marketer—and he does a fantastic job of sustaining it in concert. He pulled out all the theatrical stops, including a gigantic puppet for “Frankenstein,” and rocked straight through, never saying a word to the crowd except, “Thank you” when it was all over. Which actually accomplished two things: it kept his bizarre image completely intact, and left more time for the music. Which was pretty good, including hits like, “Poison,” “No More Mr. Nice Guy,” “I’m Eighteen,” and “School’s Out”—along with a true stroke of genius.

Right in line with the macabre milieu that featured tombstones for Jim Morrison, John Lennon, Jimi Hendrix, and Keith Moon, there was a marvelous medley: back-to-back, full-length renditions of The Doors’ “Break On Through,” The Beatles’ “Revolution,” the Jimi Hendrix Experience’s “Foxy Lady,” and The Who’s “My Generation.” Hellified homage, showcasing excellent guitar work and—it came as no surprise to his fans, but threw this me for a loop—honest-to-goodness singing mixed in which his trademark raw edge. Ironically, that came on “Foxy Lady,” not the most melodic tune ever written.

Every member of the band cooked (though the bass was buried in the mix). Still, Orianthi,  a relative youngster at 28 (Alice Cooper probably has equipment older than her), was a standout. There’s just something about a drop-dead gorgeous blonde strangling pure hell out of a guitar, clad in a black, calf-length jacket, grey-plaid, camouflage cut-offs, net hose, and a t-shirt saying “Keep Calm and Kill Zombies” that catches your attention—and holds it like glue.

Strong as Alice Copper is in the studio (his sales soundly attest to that), the stage is something else. Once you’ve caught him action, it isn’t hard at all to understand why his old fans are still with him and new ones have joined the ranks.