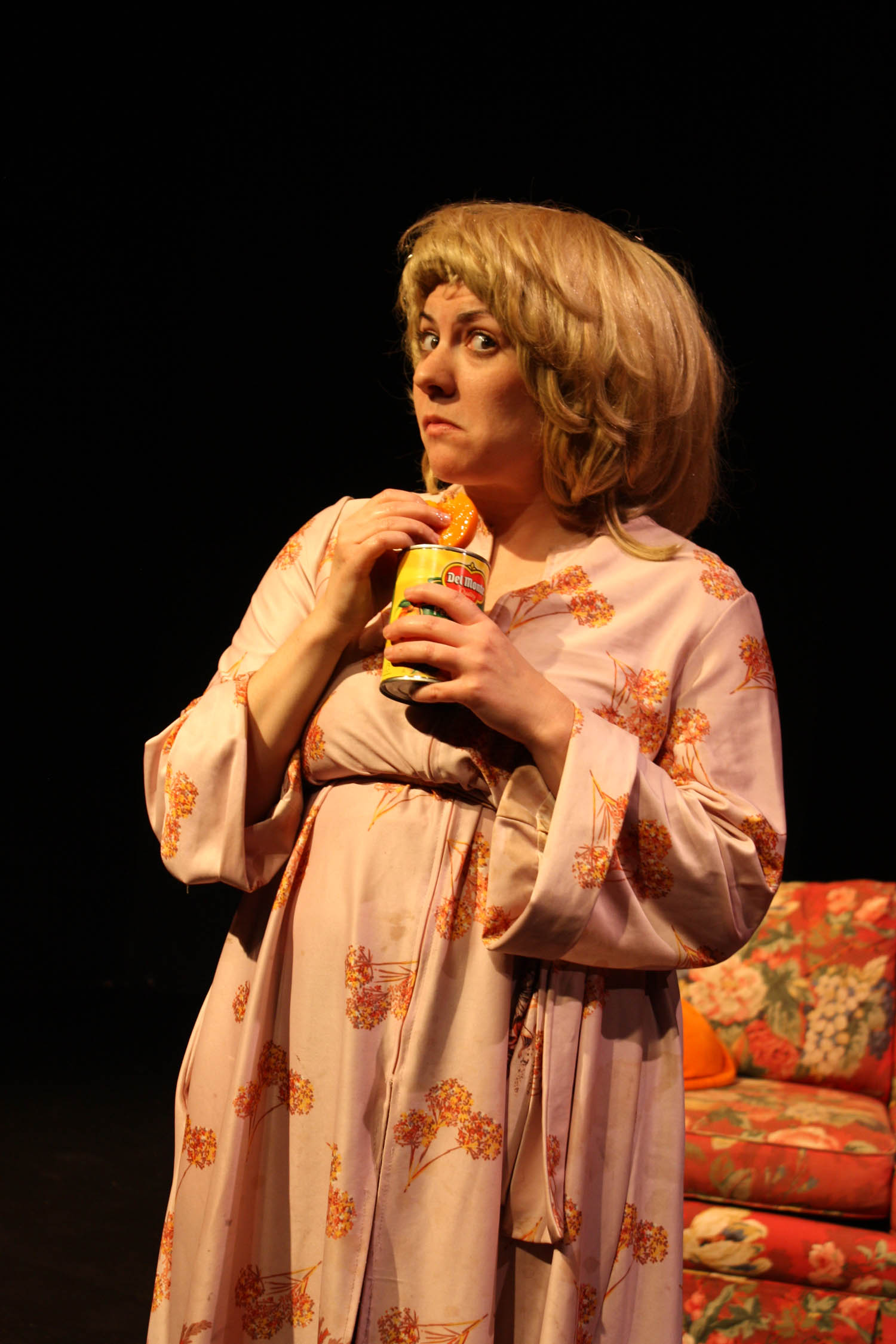 Q-STAGE is a three-part mini-festival of six new works by local queer artists/performing groups being offered up for the first time (and certainly not the last) by 20% Theatre Company. Judging by the spectrum of work on display in the two pieces that make up what they call Set A, the series encompasses everything from the sweet and sentimental to the bawdy and outrageous, both of which I’m very happy to see.

Puck Matz took a challenge from his sister to write something light and sweet (rather than the often standard go-to queer guideposts of dark and sad) and came up with a children’s tale entitled Catch A Falling Star. Matz plays the titular star in question but the plot centers around the character played by 8th grader Julianna Prohofsky.

“That better not be a monster.  I don’t have time for that right now.”

Juliana’s character has run away from home in the middle of the night, which she quickly regrets because that, of course, means it’s dark outside. Sometimes you just have to get out of the house and away from the noises and demands of family, but choosing to head out in daylight would have been preferable.  She quickly admits to the audience that she’s lost, and soon after happens upon Matz’s star which has fallen out of the sky.

Both of them want to get home, neither of them is sure how to do so. But it turns out Matz isn’t just any star. Matz is the star who was assigned to Juliana’s character at birth. Matz’s star holds all of the girl’s stories, and the girl being nearby helps the star to burn brightly again. They team up to find the way back home again.

“I’m literally a nuclear furnace, so I get kinda toasty.”

The script is funny, even cute. Prohofsky commands the stage well as the central character, and she and Matz have a good rapport together. The breaks between scenes on their journey home seem a little unnecessary, since there aren’t any set or costume changes to speak of. The audience would play along with a simple light shift. Perhaps they wanted to infer the passage of time, but I’m not sure that was entirely necessary for the story to work either. Keeping the energy up and the momentum going for the audience might be more important. But that’s a tiny quibble really.

“Most stars never meet their kid face to face.”

The story is simple and charming and the actors deliver well on the premise. The piece is only a little over a half-hour long, so it makes its point and gets on with it. Nice to have a script that doesn’t overstay its welcome and perhaps even leaves you wanting a little more.

“You don’t have to forgive someone to have sex with them. Scientists have proven this.”

After a quick intermission, it’s time to fasten your seat belts because Paige Collette is serving up another helping of her burlesque alter-ego Maxine LaRue in Bitter Victory, Sweet Defeat, welcoming us into her basement den. In a freewheeling, hilarious (drunken?) monologue to the audience, Collette shares Maxine’s tale of romantic woe, being the wronged party living with the aftermath of her lover Cheryl having cheated on her.

“What is it about playing the victim?  Playing?  Is it fun?  Are there rules to the game?  Can you win?  What about cheating?”

It’s a frank, expletive-laden revisiting of her sex life, but it’s also an easy-going chat between performer and audience that seems more random that it actually is. The piece keeps surprising you because you quite literally have no idea what Maxine will say or do next. She makes a habit of referring to a stack of notecards so perhaps even Maxine doesn’t know. But Collette as a performer always seems to be in total control. There’s improv and ad-libbing involved here, but Collette knows what she’s doing.

“People love to hear about break-ups because it creates community.”

For instance, she brings on a couple of bags of snacks at the start and continues eating throughout. She also crushes a number of Oreos in a large glass measuring cup, lubricating the crumbs with a little beer while she’s at it. After opening a can of peaches and eating several halves with chopsticks, she also slaps a couple of peach halves at either end of her couch. At the end, we get a (deceptively) clumsy and enthusiastic striptease in which both the peaches and the Oreo mix feature prominently. And that striptease, set to the strains of Steve Perry’s beloved/cheesy 1980s anthem “Oh Sherrie,” complete with twirling pasties, is the kind of carefully choreographed stumbling mess only someone in complete control of their body could pull off and still be standing at the end.

“It bleeds but that’s a good sign because it means I’m making progress.”

Everything Collette brings onstage gets used in unique and unexpected ways. Whether she’s using scissors to rip open a suitcase to liberate a large plastic wall clock, or cataloguing the musical cassette tapes she and Cheryl used to listen to (“James Taylor, secretly an Indigo Girl”), Maxine’s gift for off-kilter metaphors stretched beyond all endurance becomes progressively more laugh-inducing. Because when your tears are so big and wet they’re pregnant, and uteruses are falling from your eyes, you can always go to McDonald’s and get napkins.

The monologue is not a rant or a weep-fest but an unapologetic (wacky) exploration of where Maxine is right now and how she’s choosing to cope (in wonderfully inappropriate ways). Go watch Collette let loose all the things you wish you had the nerve and presence of mind to say the last time someone did you wrong. It’s hilariously cathartic and strange. If you’re not easily offended, it’s bound to make you smile.