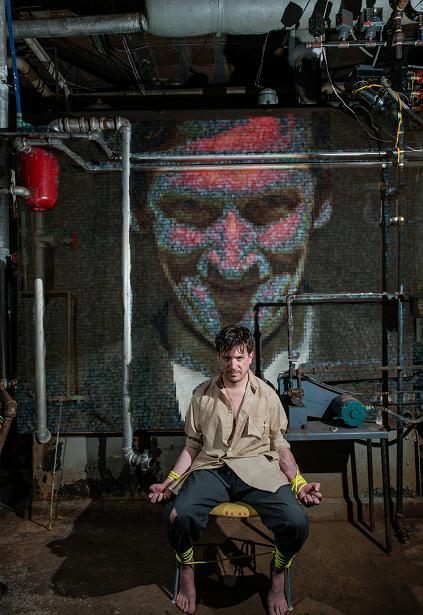 George Orwell’s 1984 is perfect entertainment for the Halloween season. There are few things scarier than this futuristic dystopia. Since 1984 was first published back in 1949 (back when 1984 was still over 30 years into the future), Orwell and 1984 and its surveillance state overlord Big Brother have become so ingrained in popular culture that they’re in danger of becoming their own well-worn cliches (after all, we’ve got a long-running reality TV show called Big Brother). It’s good to be reminded how frighteningly prescient the material still is today—three decades beyond that fateful year of 1984. Michael Gene Sullivan’s adaptation of Orwell’s novel boils it down to its essence, and Theatre Pro Rata gives the story a sharp and unsettling production.

Sullivan telescopes the plot of 1984 into a single, brutal day of relentless interrogation and reprogramming for Winston Smith (Grant Henderson) at the hands of The Interrogator (John Middleton) with the (sometimes reluctant) assistance of four party members in drab matching uniforms (Brian Columbus, Emily Dussault, William Goblirsch, and Kory LaQuess Pullam). Even though they have copious documentation and testimony about Winston’s “thought crimes,” the Interrogator forces Winston to relive his tale of daring to stray from the collective hive mind and harbor individual thoughts of his own. It is only by fully admitting and repenting of his crimes that Winston can be redeemed in the eyes of the state.

“War Is Peace. Freedom Is Slavery. Ignorance Is Strength.”

The four party members take on roles in Winston’s personal story, reading from his diary and other documents and taking on the narrative themselves—Goblirsch becomes a stand-in for Winston, Dussault for Winston’s love Julia, and Pullam as O’Brien—a member of the ruling elite who nonetheless recruits Winston and Julia for parts in the coming revolution against the state. Columbus plays spoiler and foil to this tale, indicting Winston for each act of rebellion, but also calling out his fellow party members when they seem out of line, or a little too sympathetic to Winston’s confession. Columbus’ party member is a constant reminder that no one feels secure. Even working in law enforcement doesn’t convince him that the state may not turn on him if it senses him getting the tiniest bit out of line.

“When change comes we will take part in it as handfuls of dust and splinters of bone.”

The ruling elite control the media, the government, the military and all other instruments of power. Cameras constantly monitor everyone’s movements. The government keeps the country and its people in a state of perpetual war with unseen enemies. There is also a climate of fear at home, and strict rules that must be followed. People are encouraged to hate those who are different from them, and to inform on others before they instead inform on you first. Those in power do their best to rewrite even recent history so it better suits their purposes and feed it to a willing audience which then works to shout down all dissent. Secret prisons and enhanced interrogation techniques (aka, torture).

“Your actions, like your thought crimes, bring suffering to others. You’re surprised?”

Does any of this sound familiar? That’s the thing about 1984. The audience doesn’t have to take too many steps in any direction from any part of Orwell’s depiction of a totalitarian future in order to see reflections and similarities to the way we live now, the way we have been living for quite some time. The technology once seemed like science fiction, but now it’s commonplace. The human element has always been with us. Every time you want to take comfort in some element of the story that makes it different from today’s society, something else just a little too familiar gets under your skin. You’d like to remind yourself it’s only theater but…

“The best way to control a rebellion is to start it yourself.”

Director Carin Bratlie and her team keep the whole thing simple, turning 1984 into an extremely effective theatrical exercise. The whole cast keeps you guessing how the thing’s going to turn out. Grand Henderson as Winston Smith is a resilient individual.  He makes the audience think he might not only resist the reprogramming but somehow win against all odds because for almost the entire span of the play he refuses to give up.

The four party members (Columbus, Dussault, Goblirsch, and Pullam) despite their professionalism, and their fear of reprisal, can’t help but be affected at various times by Smith’s plight. Dussault and Goblirsch in particular get repeatedly pulled in by Smith’s tale, understanding why both he and Julia might risk it all to break free, maybe build a life together. The boundary between themselves and playing someone else is a very elastic thing. This is another thing that makes you think that the individual might just find a way to win out over the state.

“There. That. Would you do that for freedom?”

It’s the persistent glimmers of hope that make the continued slamming of the door that much more unnerving. And when John Middleton’s Interrogator goes from a disembodied voice to a person standing right in front of Smith, he does it at the precise moment necessary to rattle his prisoner and escalate their engagement to its final stage. Though there’s more than enough electricity flowing through Smith’s bonds to break someone down, it’s the psychological violence that seals everyone’s fate in this prison.

“You have to say it. Otherwise your confession is meaningless.”

1984 isn’t for the faint of heart. But it’s a production that earns everything it takes out of its audience. Only something this honest could be this unsettling. Theatre Pro Rata’s production of 1984 is a timely reminder of the things we need to guard against, as well as the things we’ve already grown accustomed to that perhaps we should be rethinking. While we still have time. The year 1984 may be in our past, but the world of 1984 still lingers in our future, just a couple of steps sideways from where we live now. 1984 is a horror story that makes you think. Like any good scare, it sticks with you long after the lights come up.