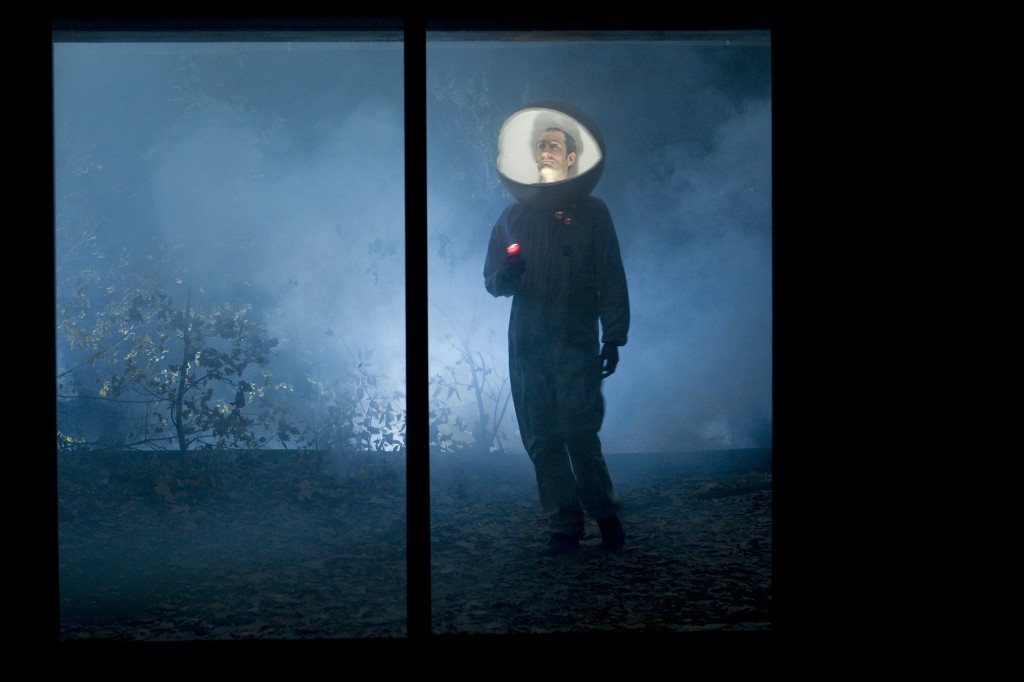 My challenge as a reviewer, I explained to my friend Katie as we left the Thursday night performance of Phillipe Quesne’s L’Effet de Serge at the Walker Art Center, is to explain why I so enjoyed L’Effet but was so bored by Sofia Coppola’s new film Somewhere. Both are marked by long interludes during which very little happens—invitations for us to just live with the characters. I decided that the crucial difference is that Somewhere asks us to feel deeply for its characters, while L’Effet asks almost nothing. A little glimpse into the life of Serge is all L’Effet promises, and it delivers beautifully on that promise.

If anything, L’Effet almost dares you to be bored. The set is plain: a finished but unadorned basement, with a sliding door opening onto a driveway. In this basement dwells Serge (Gaëtan Vourc’h), a 40ish man who says little and does little. He watches TV, he orders pizza. He has some toys, with which he occasionally plays. Is Serge quite right in the head? Maybe, maybe not. Quesne doesn’t invite a diagnosis: this is Serge, and this is what Serge does.

Every Sunday evening, Serge invites one or more friends over for a performance lasting from one to three minutes. The friends range from a young couple in a Smart car to a middle-aged man on a bike, and they all graciously, quietly thank Serge for his hospitality. I won’t reveal what the nature of the performances is, but each involves music and a simple prop. At L’Effet‘s climax, the friends all gather together at Serge’s house for a display of pyrotechnics.

L’Effet is the final work to be presented in the Walker’s Out There series, which this year spotlights European artists. (Quesne is French.) Among the four, L’Effet employs the least theatrical trickery—except for a little fog, there are really no special effects to speak of. We simply watch Serge go about his business, and after the climactic performance, we watch for a long time as Serge’s friends finish their wine, chat quietly, eat a little pizza (Serge apparently favors Pizza Lucé), and leave.

There’s one particularly long moment involving Serge and one of his guests that Katie found to be (deliberately) awkward. I didn’t find it awkward, because awkwardness is a state of not knowing what to do. It seemed to me that Serge and his guest both know exactly what they’re doing—who they are, what they want, and what they’re curious to know. With very little ado, the situation resolves itself. The fact that Quesne manages to find such drama in such a simple situation is testament to the effectiveness of L’Effet‘s refreshing minimalism.

L’Effet begins with the end of Quesne’s previous production (he’s in a space suit) and ends with the beginning of the next (he’s in a wig). Life, Quesne seems to suggest, is a series of performances. Quesne may or may not agree with Ferris Bueller that life moves pretty fast, but he would certainly agree that if you don’t stop and look around once in a while, you could miss it.

Also see: My Daily Planet reviews of the previous performances in the 2011 Out There series—Berlin’s Bonanza, Gob Squad’s Kitchen (You’ve Never Had It So Good), and Show Your Face! by Betontanc and Umka.lv. I’ve also enjoyed reading the comments on these productions by my friends in the Minneapolis dance troupe Mad King Thomas; here is Theresa Madeus’s lyrical essay on L’Effet de Serge.