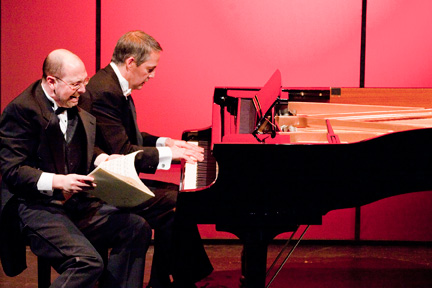 Many of us share memories of childhood music lessons, whether conscripted by our parents or by our own choice, in either case including the many frustrations of learning a new instrument and the tedium of hours of practicing the mechanics of chords and scales. We also have an understanding of the difficulty in going beyond our beginners’ books and achieving a high level of proficiency. 2 Pianos, 4 Hands draws upon those experiences and the ambitions of those who wish to fulfill a dream to perform at the top level.

Now playing at Park Square Theatre, 2 Pianos, 4 Hands stars Peter Vitale as Richard and Michael Pearce Donley as Ted, both talented pianists who aspire to greatness. The show was directed by Tom Frey, who has himself played each part in several hundred performances in other venues, including the Ordway. The actors not only play the two main characters from the age of eight up to 42, but each is required to slip seamlessly into a number of other roles, including piano teachers, parents, music school evaluators, piano students, and drunk bar patrons. And play they do, not just fulfilling those numerous roles, but also mastering those two pianos of the title. The show is filled with tunes, played solo and duet, performed onstage by the two actors. The music is not just a diversion, but integrally serves the emotion and development of the story.

2 Pianos, 4 Hands was co-written by Ted Dykstra and Richard Greenblatt, who supplied the original four hands of the eponymous characters for their creation, performing 750 shows. In Park Square’s production, Peter Vitale and Michael Pearce Donley handle the challenging roles to great success. The first act is particularly lighthearted as the audience gets to know Ted and Richard and their quirks while they learn to play their instruments. At the same time, the audience must also adapt to the device of two middle-aged men portraying eight-year-old boys. From the beginning, and continuing as the characters age through the play, Vitale and Donley convincingly capture the speech patterns and body language of typical boys, so the audience can look beyond the adult men playing them and become engrossed in the kids’ story.

Beyond the characters of Ted and Richard, we also see them with their teachers and their parents—all played by Vitale and Donley—as they negotiate and navigate their musical futures. One particularly funny scene has the two as youngsters performing a duet for competition, when Ted panics and completely blanks on his part, requiring Richard to attempt to play both. In this scene and others, the actors engage in hilarious physical contortions, all the while being required to actually play a piano.

It’s not all mere fun: the characters face difficult choices in pursuing their dreams of becoming professional musicians at the top level while dealing with the sacrifices and hard work it requires while still at a young age. The second act follows the characters, who have grown into young men and matured as musicians, as they attempt to get into upper-level music academies and face the question of whether or not they have what it takes in both talent and drive. There is more drama than comedy here, but that is a welcome addition after the fast-paced hilarity that comes before.

The playing of music is ubiquitous throughout the show: mostly classical pieces, but also including more modern songs from composers like Rogers & Hart and Billy Joel. The show culminates in a full performance of a single movement from a Bach concerto, which also opens the play. There are slower-paced dramatic intervals where key developments in the story are portrayed, but in general things are kept moving at a rapid tempo with frequent comedic bits punctuated by music. The variety of characters embodied by Vitale and Donley keeps the pace fresh and exciting. At one point, in a series of rapid vignettes, we see Ted and Richard end up teaching piano lessons and playing in a piano bar (Micheal Pearce Donley is hilarious here as a drunk bar patron demanding to hear “Piano Man” even though it was just played).

A play with only two actors must rely heavily on the talent and likeability of both, and 2 Pianos, 4 Hands doesn’t disappoint. Michael Pearce Donley has enjoyed a long career with Triple Espresso, a beloved show he co-created, while Peter Vitale has also been a Twin Cities staple, appearing in productions with the Guthrie Theater, Ten Thousand Things, Minnesota Opera, the Minnesota Orchestra, Frank Theatre, Park Square Theatre, Theater Latté Da, Nautilus Music Theater, and the Minnesota Jewish Theatre. It’s understandable why these actors have achieved so much success. They’re funny, they’re real, they’re equally good at comedy and drama, and they most definitely can tickle the keys.

The simple set, designed by Erik E. Paulson, consists of just two grand pianos—their lids removed—on stage, with large windows behind that are lit in various ways to depict changes of scene. One particularly effective use of the lighting (designed by Michael P. Kittel) shows Michael Pearce Donley as Richard’s dictatorial mother in silhouette, leaving the house and carrying her purse. For some reason, whenever Donley appears as the mother I was reminded of Hitchcock’s Psycho, but in a deliciously funny way. Costume designer Jason Lee Resler fittingly put the actors in tuxedos, using various stages of layers depending on the character and the scene.

Audience members who are familiar with music lessons may enjoy the play more than others, as some of the jokes depend on elementary knowledge of musical terms. Fans of classical music will also be particularly appreciative, since you’ll hear selections by a number of the world’s most famous composers. However, enjoyment of the show is not predicated on either of those things. 2 Pianos, 4 Hands is especially entertaining because it doesn’t take itself too seriously, yet it tells a heartfelt story of pursuing dreams; while the story focuses on music, the notion of following one’s dream is universal.